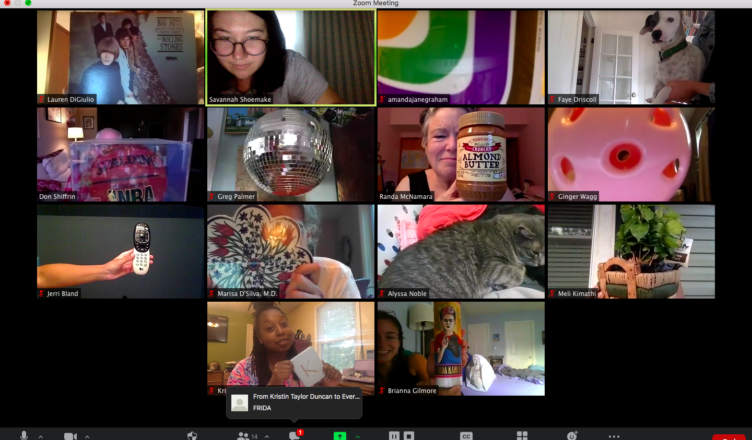 You are invited. In a time when mandated separations and chronic loneliness abound, these three words hold a strange power. In the disorientation of the moment, an invitation might cause anxiety for its beholder or even render suspicious the extender. The right kind of invitation, though, has the ability to prompt care and inspire gratitude, to guard against isolation and infection via the safest mechanisms we can muster. For us in the performing arts scene of the pandemic, those mechanisms include PPE, outdoor expanses, and the virtual landscape. Invitation, through a linguistic theory lens, also acts as a performative on the order of J. L. Austin’s famed example of the phrase, “I do.”1 The words “you are invited,” when uttered in earnest by a person with relevant authority over a given locale, transform strangers into acquaintances or an audience, convert a disparate group of recipients into a collective constellation. They open space and close distance. By invitation, the institutional barriers that tend to demarcate “professional” from “amateur,” “scholar” from “student,” and “practitioner” from “audience” can soften into a relationship between collaborators that thrives through differences of identity, experience, and perspective.

Carolina Performing Arts (CPA) is a producing/presenting organization affiliated with the University of North Carolina at Chapel Hill, traditionally bringing campus, community, and artists together for dozens of performances and artistic projects across multiple venues each season. Yet in the Fall of 2020, more than half a year after the COVID-19 pandemic stalled business-as-usual the world over, Carolina Performing Arts made a different kind of invitation to the public: to join an experiment focused on “radically democratizing access to arts learning” through a set of free-and-open-to-the-public online courses collectively titled Feedback. Hosted weekly via Zoom over a month and a half, each course brought together the conveners from CPA with a pair of facilitators, one working artist and one scholar, and 15 or so members of the public ranging from younger amateur dancers to middle-aged Durham public school teachers and elder IT managers. What united this public—whose diversity could be indexed along lines of race, gender, sexuality, age, occupation, and class—was their common interest in the topics of “Liveness” and “Arts Economies.” What began as cautious explorations of performance in digital space ended in a cultivated, shared intimacy between artists, scholars, and invited participants, enabling creative discourses that are usually insular to become inclusive.

As current graduate students and instructors in Performance Studies at UNC, we participated in these courses as contributors, witnesses and scribes. This complex positionality informed both our experiences and reflections of the virtual classes, yielding meta-analysis as we actively typed in the chat or mimicked the movements of the facilitator. According to choreographer Faye Driscoll, who co-hosted the series with Amanda Graham, Associate Director of Engagement at CPA, “presence is a practice, presence is a labor” and “staying together is stamina.” In this spirit, a newly-formed group embarked upon six weeks of being present with each other and the practitioners who would visit us in our offices, costume rooms, and front porches-turned-little Zoom rectangles to explore, as Driscoll put it, “charging up the space between” performer and audience. In the simplest terms, we examined what liveness meant while apart, or at best, while connected through virtual media. More specifically, we questioned how and why we felt together (or didn’t) as we engaged in meditative practices that centered our bodies, as we stretched and moved to the rhythms of electronic dance music, or as we gathered objects in our domestic spaces that challenged us to reflect on how we construct individualized identity.

In one moment during the second Liveness session, American studies scholar Michelle Robinson invited participants to freely express themselves using Zoom’s chat function, breaking the scholarly convention of a quiet, singular focus on the presenter, as she guided the class through a discussion of epistolary invitations to the Reverend Billy Graham from his acolytes and their capacity to “move” people. When her co-facilitator Annie-B Parson, a director and choreographer, added an invitation to change our visible Zoom names and “whisper” to each other, Faye (responding as faderskull) told the rest of the participants to private chat her. It felt like she was beckoning us into another room, offering an invitation to share a secret. One participant reflected that the ensuing flurry of chatting “forces you to prioritize” and was “beautiful yet overwhelming.” In such contexts, Feedback’s intent to enhance public engagement with artistic creation and performance manifested in alternative modes of communicating and co-creating as the sessions built upon one another.

In the third Liveness session, artist and choreographer Okwui Okpokwasili led the class through a condensed version of her movement-based practice, “Sitting on a Man’s Head,” as her co-facilitator, art history scholar Cary Levine, implored us to interpret our normalized daily interactions through the world of the practice. As participants, we listened to a sound score that Okpokwasili and her creative partner-husband Peter Born had devised, and then wrote about and shared our experiences. Through somatic writing, we investigated our embodied experiences in live time, situated in our separate personal settings. By sharing them aloud, we invited others into our own imaginative spaces and created a group practice that connected us through sound.

Invitation theory2 follows the Latin roots of the term invitare, whose meanings include “to offer something beneficial for consideration” and “to summon cordially, not to shun.” It asserts that through the essential elements of care, trust, respect, optimism, and intentionality, individuals and groups can realize potential in a number of dimensions by extending invitations to themselves and others. In the case of the Feedback initiative at CPA, self-selected community members were summoned to collectively investigate our relationship to embodied performance and to create our own ways of connecting through writing, moving, and discussing in virtual space. In accepting this invitation, community members simultaneously invited participating artists and scholars to be witnesses to them, a move that powerfully reversed the usual solicitation of attention in such settings. This led to what Okpokwasili called “a space that isn’t about rhetoric or about instrumentally managing difference,” but is about relating. Feedback, in this case, was not unidirectional and instead traveled in a loop that could be seen as infinite.

Feedback is more than an urgent response to the by now familiar constraints on connecting artists with audiences during the pandemic. Indeed, the piercing tone of a looped microphone-speaker interplay (whose sound changes, for the listener, the longer it goes on) is an apt metaphor for the manner of artmaking and inquiry composed in each session, one whose possibilities extend beyond this moment. That recordings of the courses are now available on YouTube underscores their lasting possibility to provoke further feedback, changing the term’s valence from the cacophony of audio-mechanical feedback to the generativity and variability of biofeedback, or homeostasis. To read, watch, contemplate, unite, yield, reverberate, return, and so on… you are invited.

Excerpt from the Feedback: Liveness sessions

Okwui Okpokwasili: My partner and I have devised a practice to create a platform for an improvisational sonic creation between artists and members of the public—and all of it revolves around the question of “what do you carry and how, in turn, does that carry you?” […] My partner has made a sound score so that you can…spend some time in a contemplative posture with this sound reverberating with the question and the sound. And then afterwards, writing in a way that is both grounded in your body and experience, but then can start to move to move to far-flung places imagistically…

[Okpokwasili begins to lead the class in the meditative practice centered on the question: “What do you carry and how, in turn, does that carry you?” In the background, a music score is playing. After the practice, conversation begins.]

This [practice] is generally something that happens over a long period of time, with a large group of people, walking very slowly, in a space… where you are very conscious of the fluids in your body, where your body is going, and the bodies around you. And how do you all in some way stay together, at least physically, in tight proximity? But the sonic practice is a space of agreement, dissonance, arguing, lyric, yell, shout, moan—it’s just really amazing…

I think these women shared a vocabulary, they shared concerns about what they believed and how they believed society should work and what their place in that society was. We’re living in a time where we don’t all share common languages or common beliefs about how we’re positioned and what we deserve and need. What is it to build a space where we can start to sort of fashion a shared language or an opportunity to have these arguments?

Meli Kimathi labors at the intersections of culture, gender, and race to activate wisdom, words, and ways for community-rooted possibilities. She is broadly interested in the use of personal musical practices for mental health maintenance and political solidarity and in praxes of palliative care for our dying master narratives. Meli is currently a doctoral candidate in Communication at UNC-Chapel Hill, where her engaged public humanities scholarship explores the healing work of DJs through African diaspora music in live party spaces.
Amrut Mishra

Amrut Mishra teaches and researches in the areas of performance studies and cultural studies, with an underlying focus on transnational feminist practice. In particular, his research pursues the interventions of contemporary textile artists who stage the colonial histories of fabric and fashion through installation and performance art.