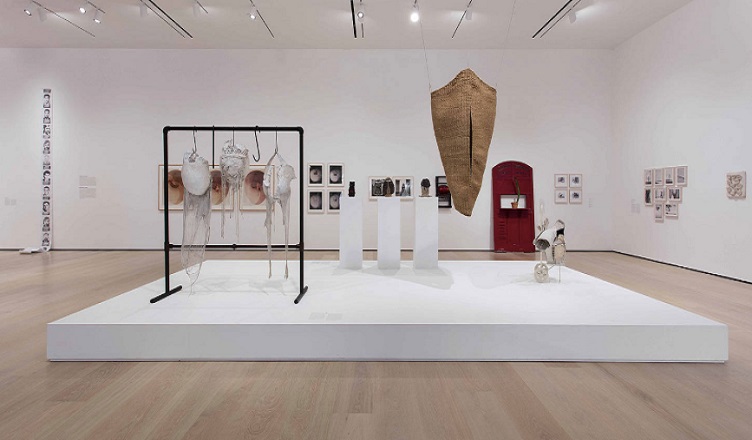 The exhibition Radical Women: Latin American Art, 1960-1985 brings historical focus and contemporary relevance to some 250 works by 120 artists and collectives. Thematic groupings, such as “Performing the Body” and “Social Spaces,” corral projects whose extraordinary heterogeneity not only indicates that the women in the show were working in the far corners of the United States and Latin America, but also that they were using a wide range of media and modes of representation to say something about the pain and pleasures of being a woman. Feminism stitches together the geographically and temporally disparate works in this exhibition. And it proves a thread that is as durable and strong as it is far-reaching and loose-ended. If the projects in this show and the subjectivities they announce are politicized and uncompromising, they are also defiantly unresolved.

Among the many accomplishments of this exhibition: it places the complexity of race and feminism front and center. The first work to greet us is a powerful video documenting a performance by the Afro-Peruvian poet Victoria Santa Cruz, Me gritaron negra (They Shouted Black at Me) (1978), in which a group of young people rhythmically shout the refrain that is also the work’s title. This introductory poem-performance shows a feminism shaped by struggles against racial prejudice and a civil rights action shaped by feminism. As such, it foretells that the rich and varied content that follows will consider how race shapes feminist thinking and how feminist thinking can shape critiques of racism. And indeed, throughout the exhibition works speak of moving through the world in female bodies that are black, white, Latina, and indigenous, and whose sexuality and gender is represented as a spectrum of heteronormative, transgender, and lesbian and gay identities.

Artists’ use of materials is just as complex and varied. There is no artistic medium not represented in this show. Printmaking, weaving, and oil painting are as present—if not as numerous—as media more typically expected of feminist artists such as photography, video, and performance. That such disparate media cohabitate productively is a product of deliberate curatorial decisions: at one of the many beautiful moments in the show a group of objects that the artists Marta Palau (Mexico), Tecla Tofano (Venezuela), and Johanna Hamann (Peru) have respectively woven of jute and cotton, molded of clay, and cast in plaster, together occupy a large low-lying plinth. The objects on the plinth present the materials of handmade craft and repetitive work. Tofano’s three small ceramic sculptures, which include a telephone and a mermaid-shaped vase, are entitled Medio de reproducción visual (Visual Reproduction Medium) from the series Esa munda macha (That Male Chauvinist World) (1973). While Palau presents an exquisite shroud, Llerda V (1973), with a shape and opening that simultaneously resembles a serape and giant labia, Hamann shows Barrigas (1979–83), three casts of pregnant bellies that she has suspended from large meat hooks.

These objects are encircled by photographs that emphasize their relationship to gendered bodies. One series documents a performance that appears typically feminist, if enormously important: photographs of a 1981 performance by María Evelia Marmolejo (Colombia) in which, in a celebration of the life-giving force of women’s bodies, she covered her head in sanitary pads, leaving her body completely nude and allowing her menstrual blood to flow freely. In another series of photographs, Liliana Porter (born Argentina, lives in the United States) issues a critique of Western conventions for structuring pictorial space that, although it deploys comparatively subtle messaging, is equally forceful. Porter inscribes the horizon line, the diagonal, the triangle and square—platonic devices for figuring Renaissance perspective—onto her hands and face, extending the lines beyond the frame so that the horizon line of the picture stretches onto the wall of the gallery.

The curators’ decision to group the wide-ranging approaches to gender under categories encourages us to draw meaningful connections between works such as Porter’s photo-installation and Palau’s woven shroud, which appear together in “Performing the Body.” Sequentially, the categories form an evolving meditation on artists’ approaches to voicing defiance and critique and, most importantly, proposing subjectivities. “Self-Portrait” and “Body Landscape” structure the first two galleries. An additional group of galleries, which is laid out at the Hammer in an expansive, open space divided by free-standing walls, includes “Performing the Body,” “Mapping the Body,” “Resistance and Fear,” “The Power of Words,” “Feminisms,” “Social Spaces,” plus a small separate gallery devoted to “The Erotic.” These groupings allow the curators to demonstrate that feminism intervened in debates about the environment, the human rights abuses of military dictatorships in countries including Brazil, Argentina, and Colombia, and that it contributed to the evolving development of new artistic strategies like conceptualism and postmodernism. They also accomplish the difficult task of conveying a historical and art-historical context that allows for nuance with regard to the disparate conditions in which the works were made. A timeline just outside the gallery displays the concrete history of feminism but notes the variance of national histories. Women, we learn, won the right to vote earliest in Uruguay in 1907 and the United States in 1920 and latest in Guatemala in 1965. In most other countries in Latin America suffrage was gained during the 1930s, 40s, and 50s.

Such historical context is useful going in. Yet grouping artworks by nations or asking them to recount history would have prevented the curators from making the productive juxtapositions and pairings that fill Radical Women. The works of many well-known artists who have been tasked with the burden of representing the lone exceptional women artists in Art Historical narratives are granted second or third lives in the company of their peers. For instance, presenting Graciela Iturbide’s iconic photograph of Magnolia, Juchitán, Oaxaca, México (1986) alongside a series of photo serigraphs by Nirma Zárte (Colombia) of impoverished children, allows the former’s work to speak to conditions of vulnerability in public and private life, taking on new significance outside the discourse of Mexican identity.

Similarly, major works, such as O ovo (The Egg) and O eu e o tu: Roupa-corpo-roupa (The I and the You: Cloth-Body-Cloth) by the Brazilians Lygia Pape and Lygia Clark, both of whom have recently had major retrospectives in the United States, benefit from their placement within this rowdy show where they appear less like a step in a monographic narrative and more embedded in pressing social-historical concerns. Likewise, works that have become icons of feminist production in Latin America are productively situated in messier narratives of experimentation. A conceptual portrait by the Peruvian Teresa Burga—the important Autorretrato. Estructura. Informe, 9.6.1972 (Self-Portrait. Structure. Report, 9.6.1972), which presents the artist’s vital signs and physiological data as flow-charts, punch card, and a recording of her beating heart—is installed in a free-standing room within the center of the gallery whose exterior walls are wrapped in self-portraits by Anna Bella Geiger (Brazil), Yolanda López (United States), and others that reframe her project as an expression of stilted subjectivity. Of particular interest to scholars grappling with the relationship between the histories of Latin American and Latinx art are the many instances in which the curators make connections between artists from South America, Mexico, and Latinas and Chicanas. Patssi Valdez’s (United States) strong presence is felt at two instances in the exhibition with her photographic self-portraits and her experimental film Hot Pink (1980), which is provocatively paired with footage of viewers exploring Marta Minujín’s (Argentina) emblematic happening-installation Menesunda (Mayhem) (1965).

The heartbeat of Burga and the poetic chanting of Santa Cruz come full circle with the final gallery. Sex, as physically autoerotic and emotionally self-generating, is the focus of works that fill this last room. Images of bodies and body parts encircle an enigmatic sculpture by Feliza Bursztyn (Colombia): a long, low, and hidden structure that moves and creaks underneath a shiny red satin sheet. Ending with sex is satisfying for the conundrum it offers by simultaneously operating in a zone of pure affect and inscribed politics. Its immediacy and appeal make art-historical thinking difficult. This is, in fact, a feat accomplished throughout the exhibition, where works and their lively interactions suggest that art-historical categories are only useful insofar as they act as foils. The success of so much of the material in this show depends on working against existing modes of artistic representation. Conceptualism, pop art, earth art, happenings, street photography, abstract painting, and other ways of making art are all called into question by the artists in Radical Women towards beautifully productive ends. This show will no doubt change our thinking about the subjects announced it its title: “women” and “Latin America.” Even more it will challenge us to question disciplinary habits. As the curators of this unprecedented show demonstrate, doing away with monographic treatments by crossing borders with a wide-ranging group of radical women is a methodological advance that art historians would be wise to follow.