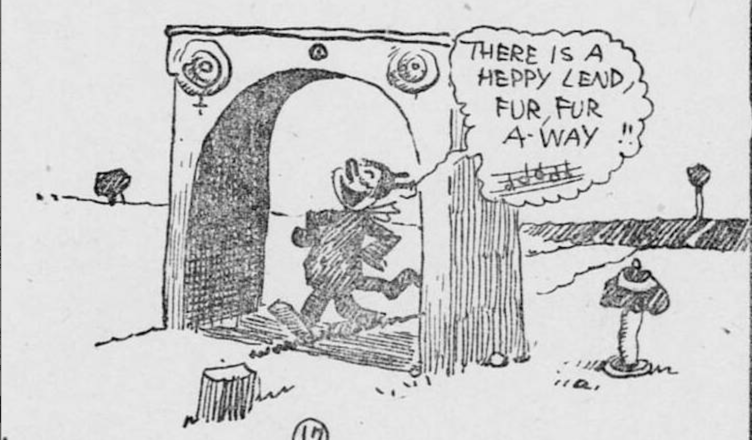 What is to be done with the horror show of racist caricature lurking throughout the history of comic art? Should American cultural objects as chronologically and contextually diffuse as Disney’s Song of the South and R. Crumb’s Angelfood McSpade be summarily turpentined from the archives, or are there uses for the dehumanizing imagery contained therein?  This moral quagmire is the site of Rebecca Wanzo’s intervention in her revelatory book, The Content of Our Caricature: African American Comic Art and Political Belonging, out from New York University Press’s Postmillenial Pop series. Wanzo asks whether there is not a specific type   of liberation work that may be accomplished by acknowledging the injury of racist caricature and reenvisioning its underlying message through a black perspective. In doing so, she creates an astonishingly effective tool for reckoning with the legacy of visual stereotypes.

The roots of Professor Wanzo’s own project lie in Toni Morrison’s penetrating study, Playing in the Dark: Whiteness and the Literary Imagination (1992), which centers around Morrison’s  conviction that all American literature is haunted by “a dark, abiding, signing, Africanist presence” (5). As Morrison notes, while the readers of American literature have long been positioned as white, “the process of organizing American coherence through a distancing Africanism became the operative mode of a new cultural hegemony” (8). Morrison’s contrapuntal readings provide a salient model for how to see color in a cultural sphere designed  to both demonize and reify “the range of color on a palette” (7). In Wanzo’s treatment, Morrison’s metaphorical palette is reimagined as an aperture through which to analyze image-texts.

By expanding and enlightening Morrison’s framework to encompass visual grammar alongside the verbal, Wanzo envisions a new paradigm of “Comics Playing in the Dark” (6). Wanzo’s provocative  gambit is to read the dehumanizing visual imperialism structuring the history of comics in the United States in order to “explore how the fantastic and excessive is a means of approaching real  experience and affect” (30). Wanzo’s readings do not shy away from the grotesqueries of racist stereotypes; instead, The Content of Our Caricature asks what these stereotypes can do as material for studying and reconceptualizing the history of black representation. Joining other recent explorations ofAfrican American artistic responses to the dehumanization of racism, such as Zakkiyah Imam Jackson’s Becoming Human (2020), Wanzo’s text provides an urgent contribution to scholarship in comics studies more specifically.

Within an expanding field of works on African American comics, The Content of Our Caricature is the first to focus solely on the role of racialized caricature in the calculus of U.S. citizenship. Anthologies such as Sheena Howard and Ronald L. Jackson’s Black Comics: Politics of Race and Representation and Frances Gateward and John Jennings’ The Blacker the Ink: Constructions of Black Identity in Comics and Sequential Art, as well as single-authored textsincluding Qiana Whitted’s EC Comics: Race, Shock, and Social Protest; Jorge Santos’ Graphic Memories of the Civil Rights Movement: Reframing History in Comics; and Deborah Elizabeth Whaley’s Black Women in Sequence: Re-inkingComics, Graphic Novels, and Anime, have collectively insisted on the need for more concerted attention to race in comics. The Content of Our Caricature joins these other texts in stressing that the structural and formal concerns ofcomics cannot be neatly expunged of their inflammatory historical content.

Distinctively, Wanzo also redefines the parameters of comics studies, long beholden to Scott McCloud’s definitional dependence on “sequence.” Wanzo reclaims and reintroduces single-panel political and editorial cartoons into the field’s purview: “comic art is a medium in which the use of caricature and other aesthetic techniques to stereotype bodies is essential to constructing meaning. Caricatures work with the various other aspects of cartoon and comic art such as the panel, the gutter, and closure to produce meaning in narrative sequence” (23, emphasis in original). By strategically remapping the limits of the field, Wanzo highlights the relational  network that caricature weaves within comics studies. Political cartoons, newspaper illustrations, gag strips, comic books, and graphic novels are all drawn together according to her schema of visual imperialism. Wanzo simultaneously situates The Content of Our Caricature according to the particularities of comics discourse and frames her project within the greater context of histories of black representation and citizenship discourse.

As Wanzo contends, the basis of black citizenship is noncitizenship, just as the basis of black representation is caricature. This correlation is not coincidental and shapes the analyses throughout Wanzo’s book. Each one of its five chapters, not to mention the introduction and coda, serve as readily excerpt-able and cohesive investigations into different case studies of African American responses to caricature. Chapter 1 surveys a range of black cartoonists whoemploy racist caricature to show how “the citizenship of black subjects… is marked—by an absence of rights or alienation from the nation” (35). Despite the disparate character of the collection of artists included in the scope of this chapter, Wanzo’s deft analysis convincingly yokes together her readings of George Herriman’s work before and during Krazy Kat, Ahmed Sam Milai’s political cartoons for mid-century African American newspapers, ValentineDeLandro’s illustration work on Bitch Planet, and Jeremy Love’s Bayou within a schema of political belonging.

The following chapter offers a tauter comparative model, bringing together Kyle Baker’s Nat Turner and Ho Che Anderson’s King. These two graphic “biographies” eschew hagiography and instead “reflexively contest historicalrepresentations of black heroic citizenship” (75). Starting from Thomas Nast’s deployment of caricature to ideologically limn the Black quasi-citizen within his own limitations, Wanzo demonstrates how Baker inverts Nast’s model, usingracist stereotypes to depict the black men who do not join Turner’s resistance. Similarly, Wanzo looks at the way that the face of Martin Luther King Jr., a man made icon, has elsewhere been used to uphold “a narrative of frozen black activism” (97). Thematizing this immobility through a “stilted aesthetic” (98) Anderson compels readers to contemplate King as circulating image thus challenging “truth” in representations of King.

This reflexivity of the image, how it announces or conceals the racist implications coded in its appearance, drives a number of Wanzo’s analyses. Chapter 3 opens with close readings of recruitment posters targeting AfricanAmerican men, which serve as comparator texts for her treatment of the Captain America run, Truth: Red, White, and Black. Wanzo reads this series in which a black soldier wears the mantle of the great American superhero as a “meta-commentary” (126) on the treatment of African American soldiers. Chapters 4 and 5 provide a study in contrasts; the former focuses on the use of caricatures of black children, the latter on race-based underground sex comix. On the one hand, the “black infantile citizen disrupts [the] representational regime” that the white child offers “to mask the nation’s abuse and failures” (168). On the other hand, if underground comix were always dedicated to exposing the repressedsexual and racial id of the nation, there is—in Wanzo’s view—a glaring difference between equal opportunity offensive humor perpetrated by white artists (like R. Crumb) at the expense of black targets, and the subversive work of black artists Larry Fuller and Richard “Grass” Green. As Wanzo asserts, the fetishization of the “Big Black Dick” as a form of consumption that separates even black readers from identifying with blackness operates in a register distinct from erotic caricature that relies on the trope but “clearly hails a black gaze” (187). These comics subvert the fallacy of equality in offensiveness by aligning readers with black subjectivity.

The insistence on the dualism between black subjects and objects is one area that bears further exploration vis-à-vis the medial specificity of comics. Wanzo’s premise relies on the opposition between “a black perspective in the creation of racialized caricature” (understood as the “aesthetic practices that African American male cartoonists engage”) and the “white pathologizing gaze” (25, 24). But as a medium which at its height was modeled according to a production line system of divided labor, comics challenges neat delineations of racially separated art precisely for the reason that some artist-, author-, editor-, colorist-, letterer- collaborations feature BIPOC producers working alongside white writers or editors and laboring to construct a shared vision. Of course, as Ronald Wimberly acutely demonstrates in his short piece “Lighten Up,” sharing a vision does not entail an equal or justly apportioned labor practice, but one would like toknow more about how Wanzo draws her own borders between creators in this process.

She distinguishes between black and white cartoonists in terms of intention and ramifications, but the collaborative mode of much comics work blurs these distinctions. Who determines what makes an aesthetic the work of an African American creator if the writer is white? What if the positions are reversed? What does white colorist Patrick Morgan’s “gorgeous work” (65) do to the composition of Jeremy Love’s Bayou? For that matter, can DeLandro’sillustrations be wholly separated from white author Kelly Sue DeConnick’s work as the writer of Bitch Planet? Likewise, how should we understand the contribution of Wilfred Santiago to Ho Che Anderson’s King—Santiago penciled over 14 pages of the work—which complicates the singularity of vision that Wanzo attributes to Anderson throughout? In a similar vein, we might note that Anderson and DeLandro are Canadian, making their respective collaborations with Puerto Rican artist Santiago and U.S. writer DeConnick, a generative opening for the theorization of transnational Black liberation aesthetics. These observations are not meant as critique, but rather to suggest yet  another meaningful avenue of consideration implicated in the rich analysis of The Content of Our Caricature. While Wanzo contends that her focus on black comics creators serves the book’s purpose of understanding caricature according to a black art tradition (23),comics invite further attention to how such aesthetic traditions and categorizations are delimited within artistic collaborations.

Before her, Morrison grounded her project in “delight not disappointment,” and Wanzo  likewise frames her project as a means of celebrating how African American artists have mobilized black racial caricature “to help us imagine what freedom looks like in its presence” (30). The coda, “To Caricature with Love” grapples with the risks involved in looking at degrading stereotypes in the hopes that they might “do other kinds of work” as well (207). Rather than destroying or ignoring these testaments to the degradation white supremacy has enacted on African Americans, Wanzo asks that we employ them in our reckoning with visual modes of establishing hegemonic sensibilities regarding otherness, humanness, and citizenship, and for the purpose of “black liberation” through “aesthetic practices of freedom” (25). As Wanzo stipulates, facing the past of racist caricature is a way to exorcise the present of its haunting: “we can treat caricature as manifesting the struggle to escape history, a referent for the need forrevolution” (220). Just who this we may be depends on the context of our caricature.

Kate Kelp-Stebbins (she/her/hers) is Assistant Professor of English and Associate Director of Comics and Cartoon Studies at the University of Oregon. She examines comics and visual media as tools for rethinking world literature and remapping transnational media flows. Her book How Comics Travel: Translation, Publication, Radical Literacies uses comparative methodology to analyze world economies of comics through the apertures of translation, cultural imperialism, and print cultures. Her work has been published in Feminist Media Histories, Media Fields, Studies in Comics, and anthologies including The Oxford Handbook of Comic Book Studies, Comics Studies Here and Now, and The Comics of Alison Bechdel.