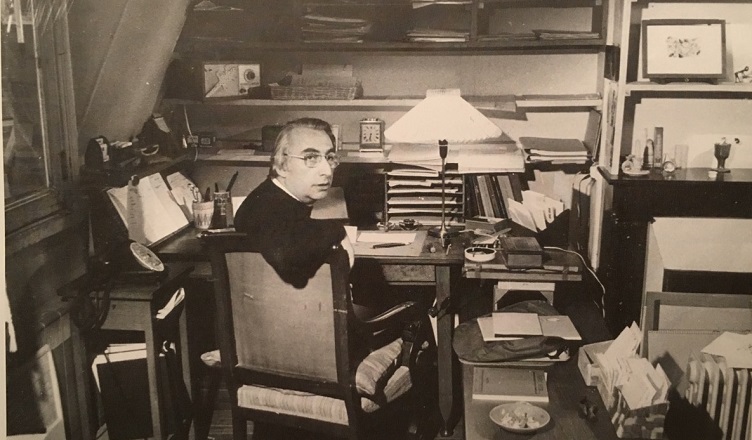 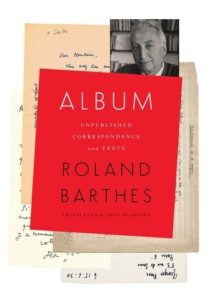 Writing for The Los Angeles Review of Books, Andrew Gallix points out the distinction Roland Barthes makes between a book and an album in his lectures on “The Preparation of the Novel” (from that late 1970s): the book can be considered a “complete work,” a monument which will ultimately be destroyed, whereas an album is “what lives in us.” Describing his visit to the BnF (Bibliothèque nationale de France) exhibition on Barthes in 2015—called “Panorama”—Gallix suggests that it “provides us with a panoramic view of the polymath’s multifaceted career. This dizzying, kaleidoscopic portrait of Roland Barthes—dissolved in the constructive secretions of his web—highlights his engagement with the world.”1 Album: Unpublished Correspondence and Texts is a collection of letters to and from Roland Barthes, along with other unpublished material including monochrome scans of archival materials and letters, by others, referencing Barthes’ father, who died in World War II. Translated by Jody Gladding and published this year by Columbia University Press, the collection highlights Barthes’ engagement with the world. It also acts as a window into his ways of thinking and relating to others.  The book is organized into five sections. The first two sections deal with the younger Barthes, starting with his time at the sanatorium for tuberculosis, and then as he begins publishing his first books. The following two sections cover the development of Barthes’ relationships with his colleagues and friends, and include correspondence related to his later writing. The final section, entitled “Exchanges,” continues the thread of the third section, with further correspondence between Barthes and those to whom he became close. Interestingly, this final section includes (as the section title suggests) the “exchanges,” that is, the letters back to Barthes from those friends. These inclusions allow the reader to see the literal “back and forth” between Barthes and his colleagues, to experience something different than the books, which are much more familiar, one-sided, territory.

Consider, for instance, Barthes’ letter from 1945 (to his friend Georges Canetti), when he was just 29 and at a sanatorium in Leysin, Switzerland. He writes, “I have a consuming desire for knowledge . . . but at the same time, I feel sick over what is poorly known, what is known only from books and is said with assurance only at the cost of huge lies, deception, bluffing, etc. I no longer can or want to talk about anything other than what I know.”2 In a letter from that same year, Barthes makes clear his opinion on the Christian Church, a negative sentiment with which he was not raised and which seemed to lessen as he approached the end of his life. He writes, “You yourself see how much that Christian poison is still active in the veins of this world . . . . Here the blundering clergy, the very caricatures of Jesuits, lurking around confessions, turning youth into morons, shamelessly clinging to the most puerile—and unpoetic—state of childhood through Boy Scout rubbish, the appearance of principles, etc. I can no longer have any relationship with those beings, with that corrupt world.”3 The letters continue with correspondence during his time in the sanatorium as he struggles through his youth with tuberculosis and romantic love. About his time in the sanatorium, seemingly seething with bitterness, Barthes writes (in 1947): “Sanatoriums can be great families, no doubt about it. But if one is obliged to spend time there, must he be complicit in such a cheerful familiarization with disease?”4

In addition to fairly intimate glimpses into Barthes’ relative youth, the book also includes letters from those who knew his father, who died when Barthes was an infant; these letters expand what is known of his father’s character (and details on his death in combat) from what Barthes himself writes in Roland Barthes by Roland Barthes (1975, France). Even correspondence with his publishers, and letters to Barthes from other well-known academics and critics of his time, are included here. There are also unpublished pieces on rhetoric, literature, popular music, and another “mythology” on the postage stamp, which was originally the text of a short film from 1964. Even the most banal letter—to Michel Butor in December 1960—makes clear Barthes’ kind demeanor toward those he loved: “I’m wishing you all a good, healthy, productive year. I’m sorry not to have seen you at all this term, but you were traveling and so was I; and work took up the rest of it . . . . Faithfully yours.”5 A letter to Julia Kristeva in September 1967 shows how much Barthes cared for her: he expresses how he is worried about her health, and how she should go to a “rest home” in order to help her to get well. He expresses, also, how her work made him feel: “I feel disturbed, transformed, transported by it, as with each of your texts.”6

The book also contains monochrome scans of autograph materials. Of interest is a piece of music presumably written by Barthes for his dear friend Philippe Rebeyrol. A number of scans of dedications from Barthes (to Maurice Blanchot, among others) and to Barthes (such as one presented by Jean Cocteau) are reproduced here as well. Unfortunately, none of these representations appear to have any information to accompany them; they are presented as pieces of curiosity, but there is little to place them in any sort of context. An additional curiosity is appended to the very end of the book: here we find transcriptions of eight sheets that comprise an outline to Barthes’ proposed but never completed late work “Vita Nova.” But these have already appeared (exactly as they are) in Kate Briggs’s excellent translation of Barthes’ lectures from the late 1970s, The Preparation of the Novel, published by Columbia University Press in 2011. That volume additionally contained reproductions of the “Vita Nova” pages, which are not included here.

While correspondence from others to Barthes is not necessarily of primary interest in this collection, these letters and dedications help the reader to understand the kinds of relationships that Barthes had with those in his circles. For instance, in a letter from April 1966, Jacques Lacan writes, “Thank you, dear Roland Barthes, for sending me your book [Critique et Vérité] . . . It seems to me that the situation is looking good.”7 In February 1970, Michel Foucault called Barthes’ S/Z “the first true analysis of text that I’ve ever read.”8 A letter from Marthe Robert, about Camera Lucida (1980), shows the power of that book: “A very, very beautiful book, my dear Roland . . . . Because I lost my mother last November and I’m also searching for the image of her that would contain all the others, that would be the only essential one.”9 Jean Starobinski writes in 1966, “you restore to criticism its full capacity for experience and risk.”10 In all, the letters and manuscripts in this volume help the reader to understand not only the kinds of relationships that Barthes had, but also their nature. He was warm with those in his circles, always open to correspondence and exchange and, it seems, they were warm in return.

Album is a messy collection in the sense that it is somewhat haphazard in its organization and in its choices. There seems to be little organizing principle to the texts collected except in the general divisions of the five sections of the book: his first thirty years; the beginning of his career; and the last three sections comprised of letters to and from others. In a more positive way, though, it is also messy because it shows the reader the richness of “the constructive secretions of his web,” as Gallix mentions. The reader gets to experience how Barthes engaged with the world, and how the world engaged with him while he was living in it. Now, the reader engages only with “what [now] lives in us.”

Dr. Nicholas P. Greco is Associate Professor of Communications and Media at Providence University College in Otterburne, Manitoba. He is interested in the nature of celebrity, the construction of masculinity, and the sacramental nature of the televisual work of Joss Whedon. His book on U2 and Roland Barthes will be published by Equinox in 2018. He lives in Southern Manitoba with his wife and daughter.