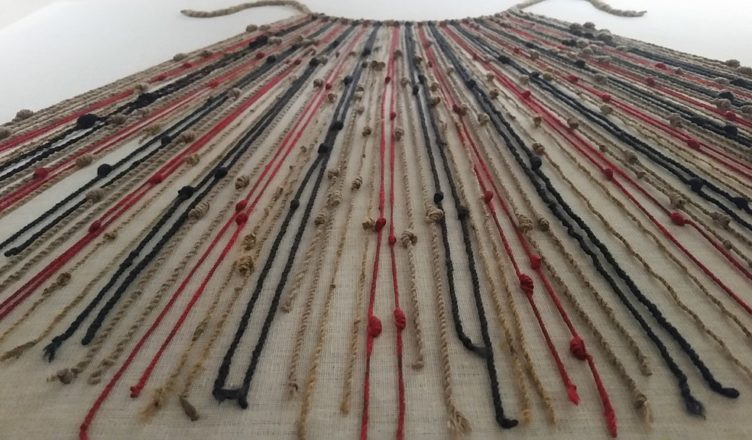 Edgar Garcia, Signs of the Americas: A Poetics of Pictography, Hieroglyphs, and Khipu. University of Chicago Press, 2020.

In 1582 and 1583, representatives of the Roman Catholic Church held a series of meetings in the Viceroyalty of Peru. During these meetings, the representatives passed a ban on khipus—the intricately-knotted multi-colored strings with which Andean peoples represented the world. As a result of this imperial interdict, khipus fell out of regular use, and to many Europeans and Euro Americans, they seemed to slip into a primordial past. However, as Edgar Garcia demonstrates in his brilliant new book, khipus have remained “living, evolving signifiers”; along with Anishinaabe pictographs, Mayan hieroglyphs, and other indigenous sign systems, they have “continuously redefine[d] themselves and the nature of the world” (33). Most concretely, these sign systems have influenced twentieth- and twenty-first-century literature and art, but more abstractly, they have challenged the very bases of colonialism and capitalism. With Garcia’s “anthropological poetics,” we can shift these sign systems to the center of Latinx and Latin American studies, Native and settler colonial studies, and other fields. Reading across space, over time, and through many media, we can even use these sign systems to cast some much-needed light on pressing planetary problems.

Signs of the Americas: A Poetics of Pictography, Hieroglyphs, and Khipu pierces through five centuries of prejudice to show how indigenous sign systems have wielded worldmaking powers. By advancing this ambitious argument, the book entwines two strands of hemispheric literary and cultural studies: like Birgit Brander Rasmussen’s Queequeg’s Coffin: Indigenous Literacies and Early American Literature (2012), it analyzes indigenous aesthetics, and like Harris Feinsod’s The Poetry of the Americas: From Good Neighbors to Countercultures (2017), it tracks transnational cultural flows.1 Most of the book’s chapters connect a single indigenous sign system to several twentieth- or twenty-first-century cultural practices: thus, Chapter Four explains how Mayan hieroglyphs shaped Charles Olson’s Mayan Letters (1953), Cy Twombly’s Poems to the Sea (1959), and Alurista’s Spik in Glyph? (1981). A few of the book’s chapters chart even larger constellations: for instance, Chapter Five illuminates the various “shamanic signifiers” that inspired Chicana feminist Gloria Anzaldúa, Beat writer/artist William Burroughs, and anthropologist Michael Taussig. Among the book’s many protagonists, the most prominent may be Jaime de Angulo, a Spanish American wanderer who worked in anthropology, ethnomusicology, and other fields. While Chapter Two pairs de Angulo’s radio broadcasts with Simon Ortiz’s poems, the Introduction pays close attention to de Angulo’s pictographs: much as Bronisław Malinowski’s field-defining ethnography opens with an invitation to “imagine [ourselves] set down…alone on a tropical beach,” Garcia’s Introduction begins by transporting us to “the special collections library at UCLA” where we can wrestle with de Angulo’s “discolored, wrinkled, and disintegrating papers” (1).2

As my Malinowski reference suggests, Garcia’s methodological goal is to strike a “grand bargain” between anthropology and literary studies (33). By collaborating with Dennis Tedlock, close-reading Claude Lévi-Strauss, and building on many other anthropologists, Garcia shows how indigenous sign systems have used particular poetic tropes—how Pueblo pictography has made metonymic spirals, or how Amazonian shamanism has created catachrestic erasures. Where others might push these poetic tropes into a non-alphabetic past, Garcia argues that they have animated the literary present—that they have “moved across languages and cultures to create contemporary experiences, insights, and relations” (xv). To prove this point, Garcia does not try to trace unbroken genealogies; instead, he explores the thresholds between different geographies and temporalities. At these thresholds, Garcia finds indigenous rhythms that transcend translation: thus, in Gordon Brotherson, Jennifer Dunbar Dorn, and Ed Dorn’s rendering of the 1524 “Aztec Priests Reply,” he detects “Nahuatl expressive patterns that carry their own reality” (51). With this method, Garcia recovers a range of indigenous formalisms, including Anishinaabe amphiboly, Incan analepsis, and “Mayan metalepsis.” Crucially, Garcia’s careful close-readings lean into (rather than away from) politics; by his account, indigenous sign systems have “served to signal-jam the dominant, apparently natural social semantics of gender, race kinship, life, world, humanity, and identity” (20).

Garcia’s method of “anthropological poetics” may be at its most elegant in Chapter Three, “Pictography, Law, and Earth: Gerald Vizenor, John Borrows, and Louise Erdrich” (indeed, an earlier version of this chapter appeared in PMLA 134.2 and received an honorable mention for the William Riley Parker Prize). Garcia begins by defining Anishinaabe pictographs as “vehicles of poetic indeterminacy” that “loop together visual, mnemonic, interpersonal, and environmental factors to create a text of shifting texture” (100). Then he shows how these ostensibly obsolete signs open new political possibilities: in Borrows’s legal case studies, pictographs “organize[s] the multiple sources of authority in a legal conflict into a scene of active interpretation” (102-3); similarly, in Vizenor’s Summer in the Spring (1981), Anishinaabe grammar governs English diction; finally, in Erdrich’s Books and Islands in Ojibwe Country (2003), old rock art finds new literary life. Because Garcia tracks the mutually transformative mediations of pictography, poetry, and prose, he is able to reveal their animating force—an Anishinaabe irony that “cracks through colonial mirrors to let shine native constellations of cultural, political, and environmental authority” (120).

From this summary of a single chapter, it should be clear that Signs of the Americas paves new paths for many academic fields. Of course, the book gives Latinx studies, Latin American studies, and Native studies new ways of narrating the history of the western hemisphere. In turn, the book offers anthropology and literary studies sophisticated techniques for theorizing collective creativity. Most importantly, the book raises questions that cut across disciplinary formations. Now that we know how indigenous sign systems have influenced poetry, can we see how they have shaped other genres (especially the novel, which Mikhail Bakhtin has taught us to see as a “process of coming to know one’s language as it is perceived in someone else’s language”)?3 While remapping the indigenous and non-indigenous Americas, can we also reconstruct sign systems from other places that we designate as colonial or postcolonial (especially ones, like Australia or South Africa, which are prominent in settler colonial studies)? As we replace the tired trope of the “Ecological Indian” with evolving Native signs, can we assemble an environmental aesthetics for the Anthropocene? As we learn how pictography and khipu have contested colonialism and capitalism, can we look for other indigenous sign systems that may have reinforced problematic paradigms? Similarly, now that we appreciate how Simon Ortiz or Cecilia Vicuña have put indigenous sign systems to revolutionary purposes, can we reevaluate the many individuals who have appropriated these sign systems in reactionary ways?

As we follow in Garcia’s footsteps, we must pay particularly close attention to the last two of these questions. Although Garcia acknowledges that indigenous signs have been “subject to expropriation, misuse, and mistranslation,” he deemphasizes this “well known” story to tell the “less known” story of “how these signs also create systems of knowing and being” (xv). For the most part, I felt fine about Garcia’s choice, but on a couple of occasions, I wondered whether he could have told the stories of use and abuse in their indissoluble interdependence. In Chapter Four, Garcia explains how Alurista’s Spik in Glyph? experiments with Mayan aesthetics, specifically considering how it uses the principle of “in lak’ech” (“I am another you”) to complicate identity claims. However, Garcia does not deal with the way that Alurista’s Plan Espiritual de Aztlán (1969) and Floricanto en Aztlán (1971) appropriate Aztec culture—and in the process, how they downplay the diversity of Native nations (including the Pueblo peoples who play prominent roles in Signs of the Americas) to fuel Chicano nationalism (with an emphasis on the masculine “o,” rather than a gender-neutral “x”). By engaging more extensively with scholarship in critical race and ethnic studies (in the case of Alurista, books by Alicia Schmidt Camacho and María Josefina Saldaña-Portillo), Garcia could have illuminated yet another important aspect of indigenous sign systems.4Precisely because they wield such profound worldmaking power, these systems can push and pull in different directions: even as they open decolonial possibilities, they can contribute to colonial realities.

All of that is to say that we will need a great deal of time to draw on, depart from, and otherwise engage with Signs of the Americas: A Poetics of Pictography, Hieroglyphs, and Khipu. As a practicing poet, Garcia has already modeled one way of doing this important work: in his recent collection Skins of Columbus: An Ethnography of Colonial Dreamlands (2019), he has found new rhythms for the indigenous and non-indigenous Americas. However, in his poetry as in his scholarship, Garcia has not pinned down a singular past, but rather opened up multiple futures. Whether we write poetry, prose, or something else entirely, we would do well to explore these futures—in their proliferating signs, we may find new ways of understanding ourselves, each other, and our many more-than-human companions. 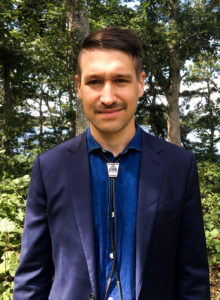 Carlos Alonso Nugent is a literary, cultural, and environmental historian of the U.S.-Mexico borderlands—and, more broadly, the Americas. He holds a Ph.D. from Yale University, and his articles have appeared or are forthcoming in American Literature, ISLE: Interdisciplinary Studies in Literature and Environment, and Modernism/Modernity Print Plus. In 2020-21, he is participating in the Mellon Fellowship of Scholars in the Humanities at Stanford University, and in 2021-22, he is joining the faculty of Vanderbilt University.