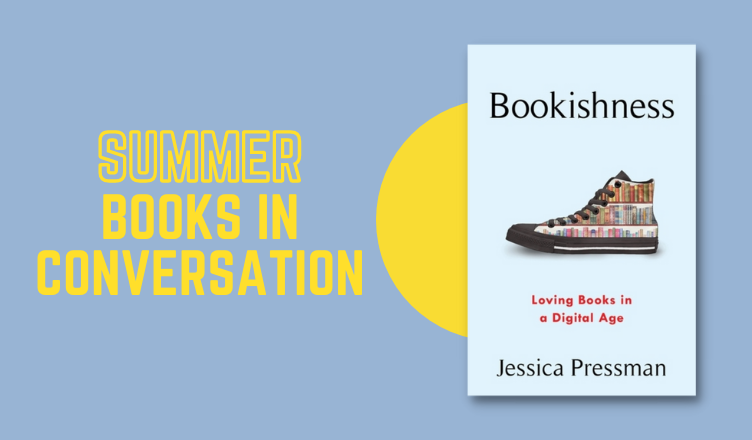 Following the success of our Thinking With series, we’re thrilled to release our Summer edition of “Books in Conversation”. This collection features conversations that scholars Douglas Dowland (Weak Nationalisms: Affect and Nonfiction in Postwar America), Jessica Pressman (Bookishness: Loving Books in a Digital Age), and Caetlin Benson-Allott (The Stuff of Spectatorship: Material Cultures of Film and Television) each have with their “ideal interlocutors” about their recent books.

This is a conversation between Jessica Pressman, author of Bookishness: Loving Books in a Digital Age (Columbia University Press, 2020), and one of her favorite former students: Tina Lumbis. Tina received her MFA in Fiction from SDSU’s Department of English and Comparative Literature and she served as Programs Assistant for SDSU’s Digital Humanities Initiative (dh.sdsu.edu), which Pressman co-founded and co-directs. Tina was not only present for the last years of Jessica’s writing process but was a source of support and inspiration for Jessica. Both Tina and Jessica are lovers of books who also study, make, and feel deep attachment to born-digital literature. Jessica teaches and studies electronic literature; Tina makes it! (Her first born-digital novel is Pheromones and Timing, and is available at http://pheromonesandtiming.com/

This is a conversation between friends; hence the casual, colloquial, and personal feel of the videos and textual transcript. This is not the usual academic book interview; that is intentional and in keeping with the spirit of the book. Bookishness: Loving Books in a Digital Age is about why we continue to love books and bookish imagery even in a cultural moment when we might not need them. The project is really about feelings and the human part of the literary culture. We wanted to model that humanness and need for attachment—to books and to other humans—in our conversation. And, because of Covid, our conversation took place over Zoom, where connection is already always mediated.

We hope you enjoy our fun, bookish conversation—in a series of 8 super short (30 seconds to 2.30 minutes) videos and 250-ish word answers.

Jessica Pressman (JP): I love the idea of us talking about a book that you were such a part of, at the end stages.

You were interested. Your enthusiasm helped the project come to fruition. You’ve really been a supporter and an intellectual collaborator in many ways in this project. So when I thought about someone to converse with about this book, I thought it would be so nice to hear what you want to know and what you’re thinking.

JP: I actually stole it.

JP: I stole it, and I give acknowledgement… It was the title of a conference at the University of Michigan (organized by Jonathan Freedman). Bookishness was a conference in 2009, and I know that because I was eight months pregnant with my daughter and had to fly across the country to give the talk. I had to get permission from my doctor to fly.

TL: Would you not have gone if you didn’t get permission?

JP: Oh, no– I was going! … I was totally going. I was invited to speak alongside some of my idols (Leah Price and Alan Liu), so there was no way that I was going to miss that opportunity.

Anyway, that was the title of the conference. I wrote a talk that, then, Jonathan (Freedman) helped me to edit into a piece for his journal, Michigan Review Quarterly. That became the first piece of Bookishness. The essay (and talk) was on The Raw Shark Texts, a novel by British author Steven Hall from 2007. I didn’t know it at the time, but that became the first piece for thinking about an aesthetic strategy that I called “bookishness”—because that was the title of the conference! I saw it then as an avant-garde strategy, a means of responding to the possible obsolesce of the book—due to digital technologies– within the pages of print novels.

When that piece was published, it really took off. People were interested in the idea that print was fighting back. So then I started to see that strategy in more places. But for the first few years, I was still focused on experimental literature– digital literature and also print works like Mark Z. Danielewski’s House of Leaves and Jonathan Safran Foer’s Tree of Codes. I talk about all of these books in my book, Bookishness, but it took a while for my understanding of bookishness to exceed the small constraints that I initially placed on it; namely, formal experimentation and the avant-garde. That is what I felt comfortable talking about: form, format, and experimental literature. I felt much less comfortable talking about advertisements, Twitter, and fashion on Pinterest, kitsch, and commodified literary studies more generally.

TL: How is bookishness about the death of the book? How does media obsolescence play into bookishness?

JP: The very fact that we use the term “book” to describe things that are not books—I mean, I have a whole chapter on fakes— e-books, PDFs, anything you find online are not actual books. They are not codexes. They are not of the technology of the book. I think that perhaps the constraints of thinking about what a book is have died. The concept of the book has proliferated and expanded beyond the technology or media of the book. So there is a kind of afterlife of books that is not limited to what the book was in the nineteenth century or before, perhaps.

TL: What does it look like to fetishize a book?

JP: That’s a good question. That’s what’s so exciting; it looks like so many different things. I still get emails from folks with bookish stuff: photos of books on socks, books on pendants—see? (This was one of the first bookish objects I bought myself in the process of writing the book)

JP: Or even actual art made out of books. So I don’t think that fetishizing books is any one thing, and I hope that “bookishness” is a term that people will use to see far beyond what I identified in my exploration.

TL: Do you consider Bookishness as exploring the networks of the book experience?

JP: Literary studies and media studies intersect and, in fact, are inseparable. I think that one of the touchstones of my scholarship is to argue and teach that literary studies is media studies. We need to pay more attention to books and/as media, mediation, and networks of connectivity. I find the concept of “network” and network theory to be really helpful for studying literature.

TL: You talk about bookishness emerging as an aesthetic response to the supposed obsolescence of books, as a reaction to the calling of “the death of the book.” In what ways do you think the book has died?

JP: I think we are experiencing a moment of rethinking and appreciating books anew. That is what Bookishness is really trying to do. Instead of focusing on the binary of book vs. not-book, print vs. digital—as if those things are really opposites and antagonists—I argue the opposite. Books and computers work in tandem to produce books and other bookish things. That recognition blows the lid off, offering opportunities to think about what books can be, how we experience them, how we connect to them, how we think about them, study them, and value them.

TL: You talk about giving the first bookishness talk when you’re eight months pregnant with Sydney; and how old is Jonah at that point?

JP: Jonah was one and a half.

TL: So, for most of your children’s..

TL: Yea! So, for most of your children’s lives, you’ve been working on this book.

TL: How did that personal experience of being a mother and professor affect the book project?

JP: I don’t know anything different than being a professor and mother at the same time. I walked across the stage at UCLA to receive my doctorate when I was pregnant with my first child. Then, one year into my first job, I got pregnant with my second child. So, there’s never been a separation between the care of mothering and the care of scholarship.

TL: Where does the mothering come into Bookishness?

JP: They are amazing. That’s all we have to say!

JP: They are amazing, and they deserve to be read and discussed and also paid attention to—as things, objects, symbols, and more.

Tina Lumbis has her MFA in Creative Writing from San Diego State University. She's presented work at the international Electronic Literature Organization (ELO) conference and has been published by Post45, Meridians, Crab Fat Magazine, and more.