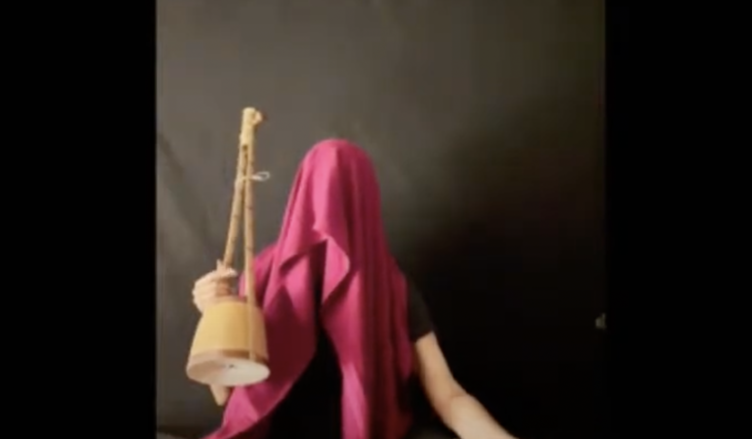 Screenshot (21:12) from the recording of the Tear performance.

W.E.B Dubois is most famous for asking, “What does it feel like to be a problem?” His insight into the affective quandaries of minoritarian life in the United States continues to resonate today, and not only for Black people. In the midst of anti-Asian violence in the United States and on the back of a devastating wave of Covid-19 in India, the question acquired particular urgency for Samita Sinha, whose new work Tear, premiered on June 3, 2021 online as part of the Asia Society’s Triennial (March 26- June 27, 2021). The performance is a meditation on opacity, refusal, brown feeling, and the power of voice.

During the performance, Sinha sits cross legged with an orange-red shawl draped over her head and much of her body. She holds and occasionally plays an ektara, a single-stringed instrument used in Hindustani music. The performance begins with the sight of the rise and fall of the shawl against Sinha’s chest and the barely audible sound of breath, it slowly builds into Sinha repeating the sound, “kai,” the first part of the Hindustani word “kaise,” which means “how.” Sinha, however, never completes the word, lingering, instead in the sound syllable “kai.” Dwelling in “kai” orients the performance around process and the multiple emotions, politics, and futures that “how” can encompass.

Throughout the nineteen minutes, the sound syllable “kai” moves through multiple emotional states. What begins tentatively evolves into rage, grief, and even possibly a plea when Sinha extends her hand toward the camera. The performance offers a vast emotional landscape in a spare setting—the self that we see is ever-contextual, but Sinha is also asking us to think deeply about what we think we know about this self being presented. We can tell that she is a brown woman who is covered, but not silenced. There is much that is given voice that we can feel, but perhaps not decipher. In this moment when anxiety, fear, and grief about disease and climate change find anti-Asian racism and anti-immigrant sentiment and the long dureé of colonialisms, colorism, class tension, gendered violence, diasporic estrangement, and multiple narratives of exceptionialism, not to mention hope, possibility, and connection, there are multiple potential sources of Asian feeling. In this context, Sinha’s insistence on opacity is political. It is an assertion of presence and voice, outside of any mandate of transparency.

Tear, I argue, shows us what José Esteban Muñoz terms brown feelings. These are the complex feelings that inhere in minoritarian being. I think especially of Muñoz’s comment that brownness “do[es] the work of shoring up normative national affect through their deviations.”1 What Muñoz means is that brownness not only exposes the normative, the unremarkable dominant, but it unites and irritates—it is what he calls, citing Du Bois, “a problem.” Following Sianne Ngai we can understand irritation as a minor feeling; it is the chaffing produced by the residue of persistent violence.2 Sinha gives voice to these expressions of deviation, these opaque brown feelings. In the expressiveness of her voice, we can feel the ways that brown femininity has persistently been denoted as exterior to majoritarian culture in the United States, not only in these more recent attacks on Asian people, but also as the crystallization of orientalism, xenophobia, and sexism. Sinha’s relationships to these structures comes through intonation and emotion—each repetition of “kai” offers an opportunity to breathe and think with Sinha.

However, by keeping herself covered, Sinha tempts us to think with Gayatri Chakravorty Spivak’s eternally useful question—Can the subaltern speak? While activating the dynamics of listening.3 Since the emotions that lie underneath “kai” are not readily named, Sinha’s performance actually asks the audience to sit with their own discomfort with this vocalization of brown feeling—discomfort, here, enabling reflection not only on the sounds, but in the anticipation of the sounds that Sinha’s pauses for breath will produce. In this sonic oscillation between silence and voice, the listener is given over to reflect on their own responses to these utterances, which circle but do not arrive at recrimination or blame. What is left to say or feel when these currents are ready to be heard, but remain unmoored? Within this emotional landscape, listeners also are privy to the breath, for as much as “kai” dominates the aural field, breath is also important. Breath allows space for the viewer to experience these reflections; it is a container for the sounds and the feelings they express and solicit in return to percolate. Breath (both Sinha’s and the listeners’) produces a sonic break that gives listeners space to think and also to prepare— to become flexible in anticipation of the next modulation of feeling and sound. Breath, then, becomes important because it reminds the listener of the role of silence in interpretation. It is in these silences that the listener is confronted with themselves and their responses to the feelings and sounds, which are inextricable from Sinha’s brownness.

There are many ways that Sinha’s sonic assertion of presence continues the communal investigations of being—Breathing Room, for example, that she began during the 2020-2021 season at Danspace. Held monthly and over zoom, Sinha taught a rotating group of participants how to do the internal work of locating themselves between breath and sound. The external manifestations were rounds of call and response externalized in Hindustani phrases and robust conversations about the various types of embodied negotiations taking place. Now that her collaborators—the audience—are hailed, but not explicitly in the performance, the feelings that emerge differ even as some of the dynamics of call and response remain. This meditation on brown Asian feeling, asks us, I argue, to sense for an ethics of how to be together, how to listen to and be with brownness.

Finally, there is also the title, Tear—is this a rip in the social fabric? A saline emission? An act of destruction? A suggestion? a description? The title’s ambiguity echoes the multiple dimensions of brown feeling that Sinha’s performance works through. Ultimately, one could make an argument that the performance holds all of these feelings (and others together), to show us a multi-dimensional brown femininity, that should not be, but is political in its assertiveness while also guiding us toward an ethical suturing. If the tear is a problem, perhaps truly attuning to its vastness is a step toward repair?

Amber Jamilla Musser is Professor of English at CUNY Graduate Center. She writes extensively on race, sexuality, and aesthetics. She is the author of Sensational Flesh: Race, Power, and Masochism (NYU Press, 2014) and Sensual Excess: Queer Femininity and Brown Jouisssance (NYU Press, 2018).