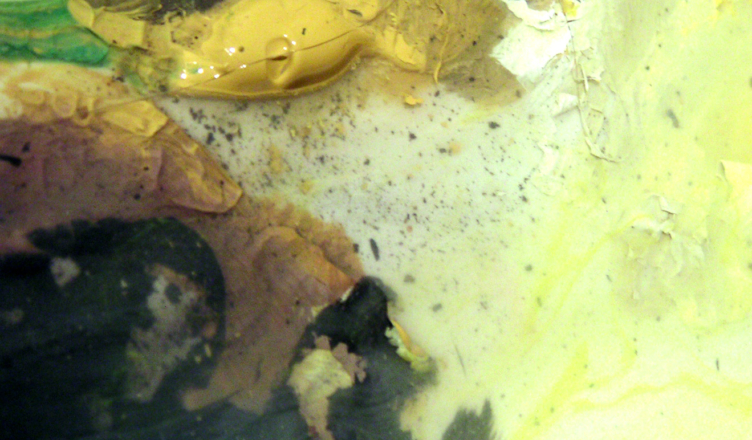 Studies of character often open with a claim that character is under-theorized. But rather than looking to critics for that theorization, we’re curious about the ways that novels themselves might offer rich, self-reflexive theories of characters. Last summer, we both read Raven Leilani’s Luster (2020), a novel about a young, Black artist named Edie in a relationship with a white, married man, which ends up also involving his white wife and their adopted Black child.

We wanted to return to it here for the ways it thinks about character in terms of historical record, artistic medium, and knowledge production. Luster represents the creation of public records as a potentially violent process in which intimate traumas are memorialized, often without consent (autopsies figure largely). In turn, the creation of character—including through role play and portraiture—emerges as a way to flirt with the pleasure as well as the violence of being observed and put on record as a particular kind of person. Fictional character offers an additional layer to processes of recording and archiving, a way to titrate vulnerability and exposure.

This dialogue forms a record—edited but not fictionalized—of our conversation.

Elizabeth Sheehan: It seems like Luster is in conversation with so much recent theory about sexuality, race, and embodiment and also conceptions of character in pop culture—video games, cosplay, fandom. It calls into question what our sources are for thinking about character and in that sense recalls Barbara Christian’s claim that Black women’s writing provides ways of theorizing that aren’t recognized as such.1 Edie’s brief line about how her DNA is probably being sold to the state also reminded me of Christian’s point that Black women provide the grounds for knowledge production and are then erased from that knowledge—from theorizing.

Megan Ward: Right—those sources don’t count as a capital-T theory because they take the form of creative expression or embodied experience. So much of Edie’s attempts to create a record of her life remind me of speculative archival methods, which have been—to Christian’s point—inspired by speculative fiction. Saidiya Hartman, for instance, credits Octavia Butler with inspiring her method of critical fabulation.2
I think Luster is also asking about the role of fiction or, specifically, character, to expand the archive. Leilani’s own professional background—working at Ancestry.com and as an archivist for Macmillan while also writing a novel—gives the final lines of novel additional resonance. Edie concludes, “I have made my own hunger into a practice, made everyone who passes through my life subject to a close and inappropriate reading that occasionally finds its way, often insufficiently, into paint.” She wishes, ultimately, to have that gaze turned back upon her so that, as she says, “when I’m gone, there will be a record, proof that I was there.”3

ES: Yes—I think the novel presents the creation of character as an archival practice while also pointing to the lack of certain characters in the archive—especially the kind of institutionalized archive where Eric [her lover] works. Edie treats sex as a way to grapple with the invisibility and ubiquity of Black femininity in the archive and the surveillance of Black women. I think that’s clear from the novel’s opening lines, in which she recalls how she first had sex with Eric via messages that one of her co-workers at the publishing house might stumble upon at any time.

Those first pages also comment on how Luster, its narrator/protagonist and its author will be conflated; Edie jokes that she’ll “revise” herself so she’s a “beach read” and Luster was on the New York Times bestseller list last August (12, emphasis in original). So even as Luster offers us this complex narrator/protagonist and, in doing so, puts her experiences, insights, and art on the record, it also anticipates how all of these will be misread. Luster makes clear how little space there is for expressing and witnessing the range of Edie’s sensations, desires, traumas, and material circumstances because she is read as a type.

That collapse of character, author, and book for me resonated with what David Kurnick has said about how our debates and literary criticism fall back on character as an easy schema for argumentative positions—as a way of recording and reacting to what’s been said that can obscure its content and context.4

MW: Luster isn’t engaging in method wars, but it is interested in oversimplification. I’m thinking of the moment when Edie watches Eric playing Mario Kart with his daughter Akila and (to no one’s surprise, since he’s a middle-aged archivist) he sucks at it. Watching that two-dimensional play on the screen helps Edie see Eric as mediocre; the line is “all the gods I have made out of feeble men.” Here, over-simplication of character—or over-simplification of people into caricatures—isn’t necessarily a stylistic problem or a moral failing. It’s also a kind of solution, a corrective measure, or a way of restructuring.

ES: That’s a good point. In terms of the possible uses of simplification, there’s also the scene when Edie and Eric and his wife and Akila dress up and go to Comic Con. Cosplay seems like a way to enjoy the affordances of flat, simplified characters.

MW: So true! It reminds of Marta Figlerowicz’s argument that one of the things that flat protagonists do is magnify our place within the social structure and, with that, remind us how small each of us really is.5

ES: I thought of Amber Musser’s Sensual Excess, which discusses a photograph by Lyle Ashton Harris that “cites” an image of Billie Holiday as an example of what Musser calls brown jouissance—a combination of pleasure and abjection.6 Musser’s accounts of inhabiting intense sensual feeling via character as multiplicity and imitation reminded me of Luster’s depiction of Edie’s lust. Musser and Leilani delink intense feeling from liberal humanist versions of interiority and individuality.

MW: I like that you raised Musser’s account of citation because it brings us back to the idea of creating a record. When Edie says in those concluding lines, “I made my hunger into a practice,” she’s showing sexual hunger as a method for record-making (227). It’s a kind of desire to get into other people and, from there, take a lasting impression.

And Edie’s hunger is also a practice for self-recording. She repeatedly says that she can’t see herself. But after she and Akila have been subject to police violence, she acts in a kind of mentoring role to Akila, and immediately afterwards, she says that she can see herself in a mirror for the first time—though she isn’t able to capture it on paper. Here Leilani connects this scene both to the long literary history of Black authors representing the hypervisible invisibility of Black bodies particularly through depictions of violence and to the present-tense expectation that that scene will inevitably arrive.

ES: That does bring us back to the question of public record and its entanglement with intimacy and violence. The moment shared with Akila and Edie’s ability to see herself generates some relief and repair in part because vital knowledge is shared and, in effect, put on record by these two characters for one another as well as by Leilani for the reading public, but to much more unpredictable and varied effect. Intimate archives exist in the wake of more public and spectacular police violence.7

MW: I think that’s right. And it reminds me of how the novel links the archive with writing characters born out of trauma and the absent-presence of certain kinds of lives. Edie’s relationship with her father is introduced and explained to the reader via two different archives. First, the Vietnam exhibit on PTSD leads her into talking about his emotional detachment after he finds his only reward for the violence of war is a racist refusal to acknowledge his service. And then, just after introducing her father as a character, she forecloses that by revealing that he’s dead by trying to find his death certificate in the library.

In both cases, the character of Edie’s father exemplifies the record and expands it. In this way, Luster makes the case that fictional character comments on and adds nuance to the official record by playing with the exposure and withholding of intergenerational trauma.

ES: Yeah I agree. I remember that Hartman also comments on her own relationship to the Black women she writes about and how she’ll be read in the same terms that they’ve been read—as frivolous or fantastic.8

MW: To me, that speaks to the real urgency of art, then. If art is an important way to counteract archival silences, saying that Black women’s art is frivolous means that an expanded, more truthful archive is impossible under those conditions.

Megan Ward is Associate Professor of English at Oregon State University. She is the author of Seeming Human: Artificial Intelligence and Victorian Realist Character (Ohio State, 2018), as well as essays in LARB, The Atlantic, and The Washington Post.

Elizabeth Sheehan is Associate Professor of English and Women, Gender, and Sexuality Studies at Oregon State University. She is a co-editor of Cultures of Femininity in Modern Fashion (New Hampshire, 2011) and the author of Modernism á la Mode: Fashion and the Ends of Literature (Cornell, 2018).