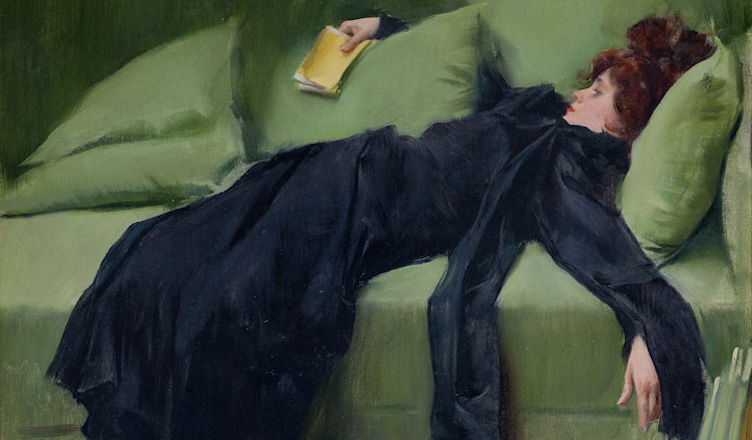 Both critique and postcritique, it seems, have “run out of steam.”1 I’m not sure where that leaves us, but at least I know how they feel. Exhaustion is a pandemic way of life. As long as we have to live with it, we may as well ask: are there things exhaustion allows us to see?2 Can exhaustion be not only a detriment to learning, but a source of learning? What does it teach?

The varied fatigues of late-stage capitalism and internet saturation inform much recent fiction. Sheila Heti remarked in an interview that it had become “tiresome to make up a fake person”; her solution was to write autofiction that apparently refuses invention.3 A similar tiresomeness animates Lauren Oyler’s recent novel Fake Accounts (2021). Oyler’s response has been not to evade it, however, but to metabolize it as both subject and form. Her novel’s title invites us from the outset to understand works of fiction in relation to online creations of self. I read the novel as an exploration of “character exhaustion,” a phrase I mean to signal several things.

There is, most centrally, the exhaustion of projecting oneself as a character. It’s an activity the novel presents as fundamental to ordinary life, where it runs along a spectrum from benign and intuitive to deeply insidious. A synopsis: the narrator—a “very online,” white, millennial Brooklynite writer—discovers, early in the novel, that her boyfriend has a secret life as an online conspiracy theorist. He dies in an accident before she can end things, so she drifts to Berlin and undertakes a dimly conceived social experiment, using internet dating to adopt a series of false personas. This plot, such as it is, provides the occasion to represent an inner life conditioned to outward-turning habits of mind. If the phrase “character exhaustion” describes weariness with projecting a self, it also suggests a fantasied end to that project: exhaustion as in “the condition of being emptied,” something akin to the “offstage” space that Erving Goffman posits as the counterpart to social life.4 Character exhaustion in the first sense, the weariness of the performance, appears as a response to the ways in which the respite feels increasingly elusive. There is no green room here—“maybe more of a Zoom waiting room,” my friend Brandon cracked, when I talked this essay through with him. When the narrator’s mind craves a lull, she opens Twitter.

Character exhaustion manifests most visibly in the novel’s treatment of self-consciousness, understood both as a way of being and as a feature of narrative. These two senses converge in the narrator’s frequent effort to anticipate readerly responses. “To be clear: I know this is boring,” she announces.5 And again, later: “This is boring. I know that.”6 Her imagined readers “have to admit, they’re looking forward to reading other things.”7 And at the end of a parodic section, she writes: “sometimes things may feel like they’ve been going on forever, but really it’s only been about forty pages.”8 These lines give a third valence to “character exhaustion”: a response attributed to, even induced in, the reader.

The narrator’s preemptions betray anxiety about the novel as a form of sustained acquaintance, as though she can’t quite believe we haven’t just given a cursory glance and scrolled away. The desire for connection is visible through the negative outline of her self-defense. If literary self-reference shows the narrator’s inclination to outsmart her own text, it also functions as a bid for intimacy with the reader, a wink that puts us briefly on the same page.9 The insistence that she already knows what we’re thinking communicates a similar blend of pride and need. Character exhaustion indexes a desire for intimacy, trust, and authenticity, even as it locates those feelings beyond reach.

All this has me thinking about the uses of scholarly self-consciousness. Impatience and exhaustion have been my dominant response to method debates that foreground issues of scholarly persona to the exclusion of more urgent problems. And yet it feels salutary to make visible the ways we construct our own critical characters, not by positioning ourselves as antidotes to “bad” readers, but by foregrounding the conditions of our labor, and conveying the social and professional communities within which our thinking happens. As Fake Accounts uses character to manifest the dilemmas of a mediated age, so might criticism use character to more fully represent our own compromised conditions of possibility. For all its exhaustions, character provides a means of metabolizing the question of what ethical scholarship looks like in a time of professional collapse.

Rachel Gaubinger is Assistant Professor of English at Connecticut College, where she teaches Victorian and modernist literature. She’s currently at work on her first book, Sibling Plots: Form and Family in the Modernist Novel. An article adapted from this project is forthcoming in The Journal of Modern Literature.