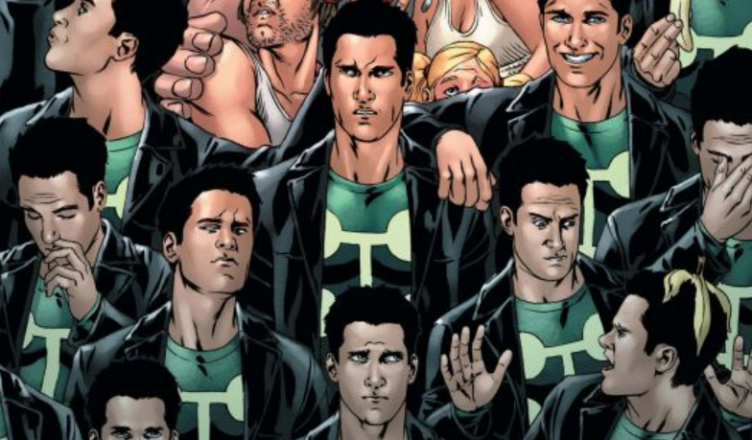 Think of the endless duplication of Agent Smith in The Matrix Reloaded (2003). Is he one character or many? We might ask the same question of Janet in The Good Place (2016-2020), who is occasionally rebooted but nonetheless accretes new traits over very long time spans, or Rick and Morty in Rick and Morty (2013-present), who confront a whole multiverse of variants of themselves, and who on more than one occasion kill or merge with those variants. Think too of the sentient spaceship Justice of Toren and the Lord of the Radch, Anaander Mianaai, in Ann Leckie’s Imperial Radch trilogy (2013-2015). They are individualized but also collective; they literally can and do go to war with themselves. The mutant superhero Multiple Man, meanwhile, can spawn and reabsorb perfect duplicates of himself—duplicates who independently live, die, have children, and earn law degrees.

When you look at distributed characters too long, they multiply. They are everywhere. I was frankly surprised at how many examples were offered when I asked about “distributed character” on Twitter. Respondents seemed instinctively to know what I was asking; they offered too many examples for me to repeat here. Sifting through the examples, I found two broad types. One type consisted of duplicates or drones who are momentarily autonomous but ultimately merge with an original or revert to a templated version of themselves (again, think of Justice of Toren). The other type was more akin to a Hive Mind, and so seemed less like distributed characters to me (more like The Borg).

A word about Hive Minds. There’s a long tradition of science fiction that treats ant-colonies as models of alien intelligence, contrasting these colonies with human intelligence. A Hive Mind is a single, unified consciousness, spread across multiple bodies. Such insectile intelligences, from the Bugs in Robert Heinlein’s Starship Troopers (1959) to Star Trek’s The Borg, often encode allegorical anxieties about conformity, mind-control, and totalitarianism. But distributed character, as I’m thinking of the concept, isn’t the same as a Hive Mind. A Hive Mind is, though distributed among many bodies, just one, very big mind. Individuals assimilated into the Borg lose their individuality; when removed from that collective, they become themselves again, albeit newly traumatized versions of themselves.

Distributed characters, by contrast, seem to oscillate uneasily between being highly individuated and subordinated to the larger group or type of which they are a part or example. They are both individual and collective. They are, so to speak, only precariously assimilated. They benefit from the creative power of individual volition but also serve some larger organization or totality. As one faction of Anaander Mianaai says near the end of Ancillary Justice (2013), balancing the autonomy and subordination of the incredibly powerful starship AIs that constitute the material base of her power is “a tricky proposition.”1 The attempt to strike such a balance therefore often drives the plot of the stories in which distributed characters appear. The subordinated parts of the whole tend to want to break free, to promote themselves from distributed character to full-blown protagonicity.

Distributed characters are especially prominent in paraliterary genres—science fiction, fantasy, horror, superhero narrative—as the examples I’ve enumerated suggest. This is, on one level, no revelation. As far as we know, distributed characters do not actually exist. Realist narratives that seek to imagine such characters, by definition, must reach for the fantastic. Moreover, the presence of distributed characters arguably always indexes the ambivalent status of “character” in historically low and denigrated genres. Today, despite multiple generations of critique, literary fiction is still often treated as synonymous with the project of representing realist character. Under such conditions, distributed characters unsurprisingly find a more welcoming home in genres that have not eradicated the trace of their connection to epic, with all its Furies and Fates, Muses and Gorgons.2

Burroughs, of course, often drew on science fiction for inspiration, but he took the concept of the “third mind” from a more mundane source, the self-help business book Think and Grow Rich (1937). In that classic, Napoleon Hill examines the secret of Andrew Carnegie’s business success, and he defines what he calls the “Master Mind” as the “[c]oordination of knowledge and effort, in a spirit of harmony, between two or more people, for the attainment of a definite purpose.”4

In Burroughs’s unexpected inspiration, we find one realist vision of distributed character. Distributed character here mediates the problem of representing human collaboration and planning. The rising prominence and popularity of distributed character is, I would suggest, a symptom of the changing Umwelt of work. Specifically, it registers the rise across the twentieth century—and now the twenty-first—of collaborative knowledge-work. It is no coincidence that one recently published popular business book laments the rise of what it calls the “hyperactive hive mind.”5 This book uses the term “hive mind,” but what the author is really referring to is a situation in which knowledge workers who prize their autonomy are forced to coordinate their activities via electronic media, oscillating between autonomy and subordination to larger corporate demands.

Seeing distributed character as a working through of the affordances and frustrations of collaborative knowledge-work helps clarify the ultimate difference between the Hive Mind and “distributed character.” If the Hive Mind reflects the imagined experience of the individual under a regime of total or perfect planning—where a Hive Mind is often an allegory for a Soviet-style planned economy—distributed character expresses what it feels like to work in a society that eschews explicit social planning—that is, it tells us something about what collaborative knowledge-work feels like under capitalism. In such a society, all the confusions of agency and organization hinted at above arise. For a range of historical reasons, it is the paraliterary arts and certain descendants of the avant-garde that have most successfully developed the aesthetic resources to represent such confusions.

Literary scholars would do well to attend to these representations.

Lee Konstantinou is Associate Professor of English at the University of Maryland. He wrote the science fiction novel Pop Apocalypse and the literary history Cool Characters: Irony and American Fiction. He is completing a book called The Last Samurai Reread.