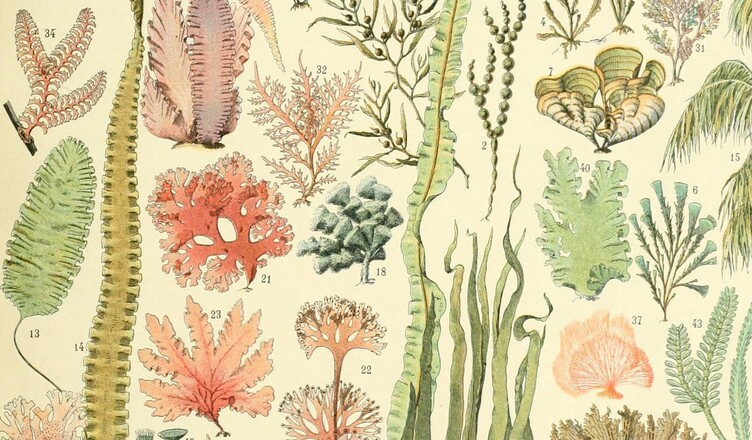 In Habeas Viscus, Alexander Weheliye calls for “new genres of human” that “disarticulate the human from Man,” the capitalized category defined by white supremacist patriarchy. To achieve this, Weheliye speculates, “we might do well to conceive humanity as a relational ontological totality, however fractured this totality might be.”1 African American science fiction and fantasy writer N. K. Jemisin represents such a fractured totality in her novel The City We Became (2020) through the six people who embody New York City and its boroughs, simultaneously individuals and enmeshed, both with their neighbors and with each other. In spite of the historical role that novelistic character played in inventing the (imperial, bourgeois, white) subject, in Jemisin’s novel, character becomes the (shifting, provisional, demonic) ground for imagining the human otherwise.2

Weheliye’s key term, “racializing assemblage,” refers both to the violent and political processes that dehumanize nonwhite bodies and to the numinous possibilities of the assemblages that emerge in their wake. These assemblages exceed and erode the idiom of possessive individualism and destabilize the dominion of Man over human and non-human worlds. Jemisin’s approach to characterization captures precisely this blur between subjection and relational potential. In the world of The City We Became, major cities around the globe come to life when they achieve a certain level of prominence and personality. In this birthing process, human avatars come to embody the city. New York City spawns five borough avatars and a sixth, a teenage Black boy who incarnates the city as a whole. The villain, known as the Woman in White, is an interdimensional creature who can possess individual white people and weaponize their xenophobic fears. The multi-racial avatars and the shape-shifting white monster embody opposed racial politics: provisional and local anti-racist alliances and totalizing and deadly white supremacy.

Jemisin repurposes marine metaphors drawn from H. P. Lovecraft’s racist phantasmagoria to contrast the cannibal logic of colonization with the erotics of assemblage. The Woman in White enters the city through white excrescences like “an anemone’s fronds, or the tendrils of certain jellyfish.”3 Toxic and tentacular, Woman in White absorbs others into her endlessly extendable self. 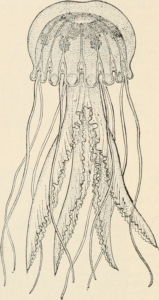 This scientific illustration features the jellyfish tendrils that Jemisin evokes in her villain’s anatomy.
Augusta Foote Arnold, The Sea-Beach at Ebb-Tide: A Guide to the Study of the Seaweeds and the Lower Animal Life Found Between Tidemarks (1901).

By contrast, she scoffs, human beings are like minute “algae,” powerful only en masse (331). Recent work in Black studies takes up ecology, botany, and marine biology to posit anti-racist, anti-capitalist forms of what Katherine McKittrick calls livingness, and Jemisin’s algal idiom evokes a similar reimagining of collectivity.4 Individualism may be flimsy, but the floating, coalescing, thriving coalitions of BIPOC characters can achieve oceanic range and tidal power.

The shifting and multiple identities of the avatars—idiosyncratic and representative, opinionated and intersubjective—rupture the reader’s bildung-inspired belief in the novelistic character (and indeed in the human being) as an individual agent. In The City We Became, character becomes a crucible for imagining interconnection: “She is the Bronx. And around her, suddenly, joined and overlapping in a way that somehow does not create paradox or cause pain, are her kin” (311). Nevertheless, Jemisin does insist on the recognizability, the typification of character.5 The book’s humor relies on readerly recognition of the borough stereotype; Brooklyn, for example, used to be a rapper and is now a politician in designer suits. With an ethnic type embodying each borough, this multicultural vision threatens to replicate the “flavor” of difference so palatable to capitalism.6 The narrator calls Manny, the avatar of Manhattan, “Generic all-American boy (non-white version)” (31). In this formulation, borough, city, and nation seem continuous, and, unsettlingly, the “non-white version” still seems on brand. Ethnic type can prove all-too-easily assimilable.

To resist the colonizing impulse expressed through novelistic character, Jemisin reminds her reader that racial identity is unreadable through phenotype, unrepresentable through stereotype. Bronca (the Bronx) is Lenape, not Latina as other characters assume (301). Padmini (Queens) is not generically southeast Asian; she speaks Tamil. As Jemisin observes in her acknowledgments: “real worlds feature real peoples, and therefore it’s important that I not depict them in ways that disrespect or cause harm” (435). The texture of racial affiliations and cultural knowledges resists typification, even as the “quintessential” spirit of each borough unites people of different backgrounds (409).7 Padmini suspects that Manny’s racially indeterminate appearance memorializes the Black, Native American, Latino, Chinese, and European immigrants whose bones lie under Manhattan. Though each history of oppression is distinct, the human cost of the genre of Man and its exclusions is profound and shared.

As the avatars realize that they “are part of each other” (104), they find new bases for queer identification, kinship, and desire. They are “conjoined,” “reverberat[ing] in concert” (430). In this sonic vibration, like the acoustic ecology of marine algae, Jemisin offers us a model for collective, posthuman character.8 Black studies fosters this improvisatory and affiliative ethos, critiquing the genre of Man that consolidates white supremacy and asking how our fictional worlds, as well as our actual ones, might open up spaces for living and thriving in new forms of relation.

Catherine Keyser is Professor of English at the University of South Carolina and the author of Artificial Color: Modern Food and Racial Fictions (Oxford, 2019) and Playing Smart: New York Women Writers and Modern Magazine Culture (Rutgers, 2010).