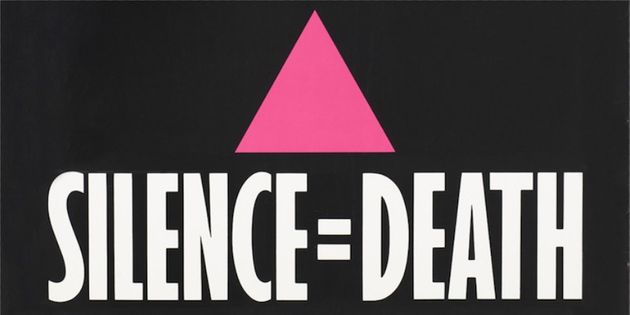 Iconic SILENCE=DEATH poster created by the Silence=Death Project founded in 1987 by Avram Finkelstein.

For more than a generation, AIDS has been a structuring facet of gay identity and the field of historical violence from which so many selves have emerged, knowingly or not. When black posters carrying the words “SILENCE=DEATH” appeared on the streets of New York in 1987, they arrived as a moral indictment. By then more than 24,000 Americans had died of AIDS. In a notorious act of genocidal reticence that haunts us to this day, the President of the United States had yet to declare the epidemic a national concern. It was not until 2016, after AIDS had claimed the lives of more than 100,000 individuals in New York City alone, that a public memorial was erected to commemorate the immeasurable loss precipitated by the crisis. In the wake of such erasure and delayed recognition, the demand to be heard remains potent, as does the drive to connect with a stolen past whose lost voices amount to a caesura.

The Inheritance, Matthew Lopez’s sprawling two-part play that premiered at the Young Vic in early 2018 and opened at the Ethyl Barrymore Theater last fall, follows a group of gay men living in New York three decades after the Silence=Death Project first pasted its eponymous posters across the city. Unfolding as a collective account, The Inheritance, which closed in March after a shorter-than-expected Broadway run, explores AIDS and its consequences through a set of same-sex relationships that cut across class, age, and, to a much lesser extent, race. Over the course of the play’s six-and-a-half hours, questions of indebtedness intertwine with competing notions of progress and tradition. At the heart of it all is the matter of property: those who possess it and those who are possessed by it.

The Inheritance arrived to New York fresh from the Nöel Coward Theater in London’s West End with its core cast largely intact (of the six leading parts, only Vanessa Redgrave did not reprise her role; Margaret, the sole female character, was instead assumed by veteran actress Lois Smith). The play’s transatlantic journey echoes its genesis as a loose adaptation of Howards End (1910), the famed modernist novel by E. M. Forster. Forster’s literary classic provides the framework for Lopez’s epic drama, informing its thematic tone as much as its narrative development. In a bookish nod to those in the know, the playwright even lifts the occasional passage for his own dialogue. Forster, whose homosexuality came to light after the posthumous publication of his late work Maurice in 1971, is reclaimed by Lopez as a gay forefather without whom the present tale could not exist. He appears in The Inheritance as an avuncular spirit guide, known to the chorus of Young Men he advises as Morgan, the name once used by the author’s inner circle. The Young Men are the lifeblood of The Inheritance: a band of creatively blocked writers at the start, they take on the guise of other characters that propel the story forward. Lopez’s Forster, affectionately rendered by Paul Hilton, also changes shape, morphing into the equally edifying Walter when not offering his counsel as Morgan. Stephen Daldry’s kinetic direction and Bob Crowley’s barely-there design amplified this transformative aspect of The Inheritance. Reminiscent of 1960s minimalism of the Judson Dance Theater variety, Crowley covered the stage with an elongated platform upon which desire was articulated and the past became visible. 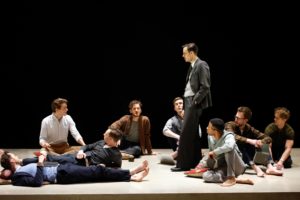 The company of The Inheritance at the Young Vic. Photo by Simon Annand. Courtesy of photographer.

Like its novelistic predecessor, The Inheritance begins with a series of one-way communications and revolves around a string of chance encounters. Lopez transposes the Schlegel sisters into male lovers, Toby Darling and Eric Glass, two 30-somethings with a rent-controlled apartment on the Upper West Side courtesy of Eric’s grandparents. The encroaching reality of the New York housing market threatens their enviable heirloom while Toby’s self-destructiveness, in turn, threatens the relationship. Toby, in a standout performance by Andrew Burnap, is a mildly successful, egocentric writer who has been commissioned to turn his autofictional YA novel, Loved Boy, into a play. Kyle Soller returned as the morally conscious and outwardly extending Eric, the role that garnered him an Olivier Award for Best Actor in 2019. A succession of fateful meetings brings Walter Poole and Adam McDowell into the picture, the former a revered elder whose revelations become central and the latter an aspiring actor who, after being fostered by the couple, lands the leading part in Loved Boy. Toby falls for Adam but is soon rejected. Seeking to quell his pain, he responds to an online ad by Leo, a young drifter who bears a striking resemblance to the object of Toby’s desire. As Adam’s foil, Leo serves to throw class into high relief. Newcomer Samuel H. Levine, who originated both roles in London, was compelling but uneven, more convincing in his performance of an affluent thespian than a homeless sex worker who later becomes addicted to crystal meth. 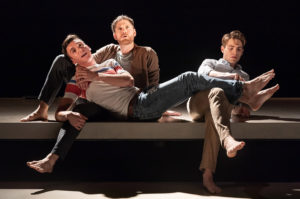 While Toby is away rehearsing for Loved Boy, Eric befriends his neighbor, Walter. Walter’s longtime partner, the pragmatic billionaire Henry Wilcox—an Americanized version of Forster’s English patriarch played by the stellar John Benjamin Hickey—is traveling on business, and the two quickly forge a bond. During their short but intense friendship, Walter recounts stories of his youth that include his intimate beginnings with Henry in the 80s and their later retreat to an upstate property in the midst of the growing crisis. Unable to face the realities of the time, Henry fled to Europe just as AIDS was ravaging New York and its environs. Under Walter’s purview and in Henry’s absence, their house became a refuge for ailing men with nowhere else to go. Henry eventually gave Walter proprietary rights, abandoning his commitment to a dying community and allowing Walter to continue his mission without interference. This personal history forms the backbone of The Inheritance and sets the foundation for much of what follows. Walter sees in Eric a “spiritual heir.” When Walter dies unexpectedly, his wish to have the property bequeathed to Eric goes unfulfilled: Henry and his sons burn Walter’s handwritten decree in a tragic act of defiance picked nearly verbatim out of Howards End. 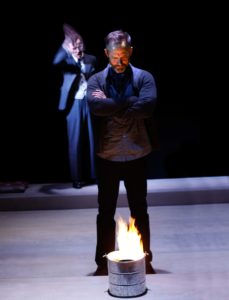 John Benjamin Hickey and Paul Hinton in The Inheritance at the Young Vic. Photo by Simon Annand. Courtesy of photographer.

The Inheritance is a long, ambitious, messy work rife with plot and subplots. Some fail to penetrate, but they all strive to measure Logos against Eros. The Inheritance contends that, as a culture, we have intellectualized AIDS but have not registered its weight emotionally. In one of the play’s most resonant scenes, Eric admits to Walter at the end of Act One, “I can’t imagine what those years were like….I can understand what it was. But I cannot possibly feel what it was.”1 In response, Walter attempts to paint a picture:

“Tell me the name of one of your closest friends.”
“Tristan.”
“Imagine Tristan is dead. Name another.”
“Jasper.”
“Jasper is also dead.”2

This continues for another two pages with the Young Men replacing Walter in a communal takeover that quiets Eric’s participation:

In discussing his inspirations for The Inheritance, Lopez cites Gatz, the 2010 play by Elevator Repair Service in which the entirety of The Great Gatsby (1925) is read aloud in an 8-hour, performative materialization of F. Scott Fitzgerald’s prose.5 The Inheritance too is a kind of collaborative reading, though one without a predetermined end. The Young Men—later Toby, Eric, Adam, Leo, et al.—operate as dramatic storytellers whose commentary gets woven into an imbricated saga of social import. Walter Benjamin understood storytelling as a craft that imparts wisdom as opposed to a message. Rooted in orality, storytelling demands an intercourse that the novel, its roots in writing, does not. The Inheritance emerges through the interstices of drama and literature. At its most generative, it is a negotiation between the two. If Lopez ultimately privileges theater for its world-making potential, it is only after properly acknowledging books as formative to a gay imaginary, before the making of such worlds were possible. The play rightly suggests that, when solitude is more necessity than choice, reading can provide sustenance. That an encounter with the play-as-text remains as rich as it does is perhaps why many of its characters seem tethered to the page. 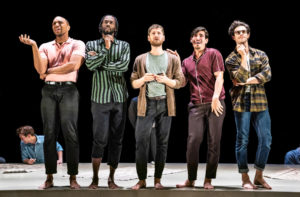 The Inheritance joins a theatrical lineage that includes the graphic interventions of the Silence=Death Project and the choreographed protests of ACT UP. It is a genealogy of visibility and resolution; the cry “Stop killing us!” that AIDS activists demanded of institutions in the 1980s becomes, under Lopez’s pen, a romantic declaration of gay life unencumbered in the 2010s. The intent for resolve that was essential during the worst years of the epidemic, however, is in The Inheritance often overwrought. Less than the sum of its parts, the play as a whole lacks force, a remark Virginia Woolf, in her 1942 essay “The Novels of E. M. Forster,” also made of Howards End.6 Unlike Jeremy O. Harris’s Slave Play, a sucker-punch of a production that made waves last season, The Inheritance limits confrontation for the sake of comfort. In its effort to heal, it papers over traumas rather than expose them for the festering wounds they are. When The Inheritance does hazard national critiques akin to Slave Play, such as when the otherwise astute Tristan makes a contrived analogy between the HIV retrovirus and the current administration, they fall flat. Among other things, the divergence between the two works highlights the fault line of contemporary identity politics and the increasingly perceptible gap between gen X and millennial playwrights invested in them. Lopez, 13 years O’Harris’s senior, stands on the cusp.

In the end, The Inheritance is not quite a reckoning; it’s too ceremonious, too tender. It nurtures its presumed audience with a warmth that seeks to absolve viewers and assuage their pain. For those in search of such compassion, chiefly a generation of cis-gendered gay men who loved freely and survived a plague that robbed them of that pleasure, The Inheritance can feel like a release. But, as poet Ocean Vuong writes, “sometimes being offered tenderness feels like the very proof that you’ve been ruined.”7

The Inheritance opened at the Ethyl Barrymore Theater on November 17, 2019 and closed on March 15, 2020. This review refers to the original Broadway cast.