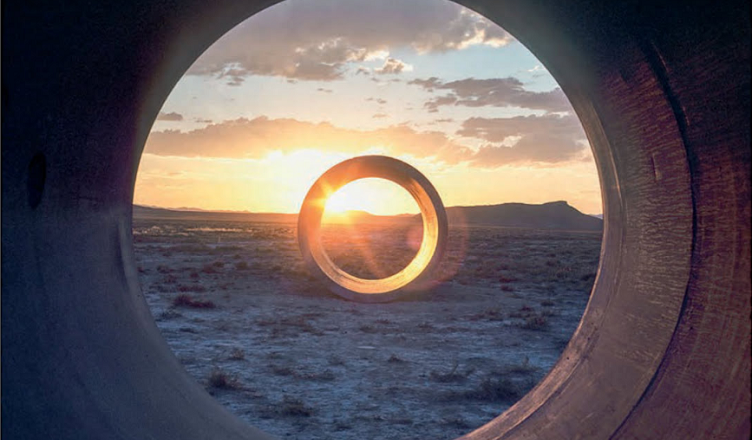 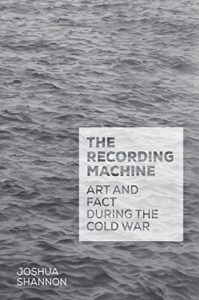 The final line of Alain Robbe-Grillet’s 1956 essay, “A Future for the Novel,” proposes that “the visual or descriptive adjective, the word that contents itself with measuring, locating, limiting, defining, indicates a difficult but most likely direction for a new art of the novel” (24). If one were to simply replace “the novel” with “art”—as in the visual arts—then one would have a good grasp of the aesthetic trajectories examined and articulated in Joshua Shannon’s excellent study of the changing status of information and knowledge in the deepening Cold War decades of the 1950s-1970s and the influence of these epistemological shifts on artistic production, especially in the US. Shannon, who is Associate Professor of Contemporary Art History and Theory at the University of Maryland, claims the fulcrum forThe Recording Machine: Art and Fact During the Cold War can be located temporally around the “seemingly irrevocable turn taken by the avant-garde in the years around 1968” (5) when the effects of Big Science, the military-industrial-university complex, and the quantification of all aspects of quotidian existence were reified in numerical data. The ascendency of a certain stripe of objectivity resulted in the triumph of facts. At a time in which human agency and the world’s fate were ceded to complex machinic systems, the illusion of control offered by facts helped codify their talismanic status. And it is the power and malleability of facts at this historical moment that drives the artists and works that Shannon explores, works he describes as a “weird, stringent brand of realism” that affected “painting, sculpture, and performance, as well as photography” and resulted in an international mode of art making he calls “factualism” (5). As Ed Ruscha claims for his books of photography that document non-descript US architectural sites in rote, list-like fashion: “I like facts. Facts, facts are in those books” (Thirtyfour Parking Lots in Los Angeles, qtd. p. 1). The lineage of factualism, so argues Shannon, ranges from the arguments surrounding mimesis amongst the ancient philosophers that proved important to nineteenth-century realism, to the liberation of the biological eye celebrated by Vertov’s cinema, to the Soviet documentary movement “factography,” to Dada, and through the neo-avant-garde leap from Duchamp’s ready-mades and Cage’s chance programs with Fluxus.

Fact, as one of “the fundamental myths of modernity” (9), operated in a supposedly independent manner from “interpretation, even from all things human” (10). The supposed independence provided factualist artists with an important contradiction in “recording-machine epistemology” (10). Ranging from conceptual photography to photorealism to earthworks to system arts, Shannon addresses an impressive array of artists, movements, and works to unfold the myriad and contradictory ways that facts operated as the sine qua non of knowledge formulation, production, circulation, and legitimation. Taken together, these map onto Shannon’s primary qualities for factualist art works: machine, matter, surface, and system. Two of these terms, as the book notes, came to stand metonymically for ineluctably inhuman socio-governmental and economic organizations generally: system and machine. As such, the various meanings generated by these terms both evoke and constitute the complex tensions operative in factualism. Each chapter addresses a number of artists whose work aligns with factualism as an artistic genre as well as with the taxonomic traits mentioned above.

The first chapter, “Machine: Conceptual Photography,” starts off with a brief discussion of Douglas Huebler’s methodically planned “random” snapshots entitled Variable Piece #4 New York City, November 1968 and places his work in the context of works by John Baldessari, Andy Warhol, Vito Acconci, Jeff Wall, Agnes Denes, Bruce Bauman, and others before delving into detailed readings of pieces by Ed Ruscha, Bernd and Hilla Becher and Huebler (again). The links between these artists are glaringly evident while geographically dispersed. They become case studies of the shift in 1960s art photography that “imagines cameras as tools for capturing everything, without regard to significance” (24). While clearly the most concrete example of the eponymous “recording machine” can be found in these examples of conceptual photography, Shannon wishes to explore this shift within the larger contextual frame of the period’s “complicated relationship to facts, to evidence, and to science,” (24) issues, he argues, relevant for the present geo-political situation. As an extended inquiry into the roles played by art of the 1960s in questioning epistemological inheritances, the works by the Bechers, for example, become a meditation on typologies. They “[slot] individual units or cases into catalogues” (39) to question the nearly invisible power of taxonomy on Enlightenment thought. In this way, the Bechers were in dialogue with other systems thinkers of the day: Norbert Wiener, Gregory Bateson, and other Macy Conference attendees. These thinkers provide the signature theoretical bases for the Cold War and the import that information and facts played in the geopolitical struggles of the period. Shannon does not evoke these figures, but they remain clearly in the intellectual background of his book. As Bateson once claimed in relation to classification technics, for example, the division of the perceived universe into parts and wholes is a useful and perhaps necessary tool for human cognition, but no necessity determines the division. The Bechers write about their “comparative anatomy” of derelict industrial buildings in a similar manner. They claim the system they use is that of generic taxonomic strategy: a taxonomy is a taxonomy is a taxonomy. The Foucauldian/Borgesian echoes are clear. Interestingly, Shannon also notes the stated influence of August Sander on the Bechers’ work. Sander’s encyclopaedic classificatory project, Antlitz der Zeit (Face of Our Time, 1929), offers an objectively detached, almost anti-humanist documentation of human types prior to WWI. Thus the machine of the chapter’s title is not only the mechanical eye of the camera and its cool observation; it is also the machinic mode in which conceptual elements of an artistic enterprise unfold in the manner of simply gathering facts.

The other chapters feature substantial engagements with works by Robert Smithson and Vija Clemins for “Matter: Art in the Desert,” Richard McLean and Robert Bechtle for “Surface: Photorealist Painting,” and a Jack Burnham-inflected take on Gerhard Richter for “System.” Numerous other artists and pieces figure into the overall framing and discussion of each chapter.  A thread that runs throughout the entire book, no matter the emphasis, is the direct and indirect influence of Robbe-Grillet on the artists and the relationship of his roman nouvelle and zero degree aesthetic with the works under discussion. This intertexuality bolsters many of Shannon’s arguments and readings while also creating complexities and problems that fall beyond the book’s purview.  Still, Robbe-Grillet’s discussions of objects and surfaces as constituting a proposed future of the novel have important links to a provocative question posed by Shannon in the photorealism and surface chapter. Why, he asks, was realism in painting so fundamentally discredited by modernism when realism held sway in literature, an aesthetic default Robbe-Grillet attempted to redress.1 Shannon suggests the answer may reside in the apparently irrefutable indexicality of the camera, a visual effect that privileges the surface of the photographic image over the depth of painting and lived experience. “The camera promised, in a way literature never could,” he writes, “access to a world described as surface, a mode of vision both indiscriminate and complete” (147). It’s worth noting that the camera was almost exactly 150 years old at the time photorealism enters the art scene and thus seems an odd vehicle for this modernist sea change so late in the game. Perhaps it is indeed this very time lag of photography’s influence that allows realism to return to painting through photorealism’s embrace of the hidden powers of the anonymous snapshot. Similarly, I would add that camera vision is precisely the path that some literature was taking in prose and poetry (e.g. Francis Ponge and others) in the decade prior to photorealism. Nonetheless, Shannon’s reading of photorealism in terms of an obviously questionable facticity of the camera image is compelling, and it is attentive to the decidedly ambivalent relationship that factualist artists had with the emergent epistemological paradigm.

Shannon’s exploration of facts and their status chimes with Robbe-Grillet’s aesthetic pursuits and links to the cultural ethos of the mid and late 1950s. It also examines the philosophical tenet posited by existentialism: that existence precedes essence (if essence there be at all). Robbe-Grillet writes that “the world is neither significant nor absurd. It is, quite simply. That, in any case, is the most remarkable thing about it” (19). In his aesthetics-to-come, “gestures and objects will be there before being something; and they will still be there afterwards… mocking their own ‘meaning’” (21). Linking back to the experimental and new literature he wishes to forge and identify, Robbe-Grillet evokes the quandary offered by the history of optics and empiricism for scientific inquiry during the Enlightenment. This evocation serves as a genealogy for the issues pursued by the factualist artists when he claims the impossibility of objectivity “in the ordinary sense” (18). “But freedom of observation should be possible, and yet it is not” (18).

The crux of this formulation proves essential to factualism as delineated by Shannon: that seeing anew through optical innovation and precision, e.g. with lenses or photographic indexicality, is merely to see differently, not necessarily better or more truthfully. The artists Shannon associates with factualism understood the ambivalence of progress wrought through the increased dehumanization of knowledge and offered a seriously playful, indeed humorous, deep-dive into the epistemology that constituted the Cold War world. It is in many ways the world we still inhabit, and this book’s relevance for the contemporary moment gives it useful, if regrettable, purchase.

Ryan Bishop is Professor of Global Art and Politics at the Winchester School of Art, University of Southampton UK. He writes on critical theory, aesthetics, technology and the Cold War. He co-edits the journal Cultural Politics (Duke UP) and a few book series, and recent books include The Avant-garde Lab (with John Beck, forthcoming Duke UP), Zero Degree Seeing (with Sunil Manghani, forthcoming Edinburgh UP) and Cold War Legacies (with John Beck, Edinburgh UP).