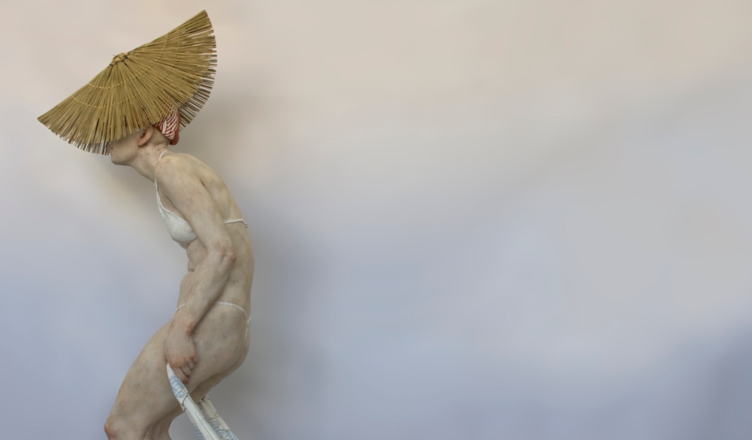 ROJI, Chie Shimizu’s recently closed solo show at NowHere Gallery in New York City featured sculptures produced throughout the past 15 years of a career spanning three decades. The title evokes the ancient Japanese tradition of the tea ceremony; more precisely the tea garden, a space of serenity and calm meant to ease participants from the bustle of social life into the sanctum of the tea house. Since their inception in the 16th century, roji have become one of the most iconic examples of Japanese spatial arrangements, copied and reproduced around the world. Yet it does not quite refer to a physical place here: Shimizu wants us to imagine her “creating art as if I have been walking through such a place, a roji, and seeking the true nature of humanity.” A grand, endless quest, to be sure, though Shimizu does not pretend to offer an answer. Ambling between pieces produced over the past fifteen years affords many opportunities for introspection and meditation. Still, in spite of its air of serenity, darkness lurks at the threshold of the tea house.

Entering NowHere, we are greeted by two disembodied, plaster heads with curled, elaborate hairdos, Head no.1(fig.2) an androgynous, blank-faced figure, heavy eyelids and mouth agape, Head no.2 (fig.3) maybe an older man, his brow deeply furrowed, lips pursed in what could be a whistle or an endless, pained sigh. The generic titles of Shimizu’s pieces tell us nothing as to whose heads these might be, but the stated inspirations for her work offer intriguing possibilities. In the text accompanying the exhibition, Shimizu evokes the history of the tea ceremony (a ritual first recorded in the early 9th century, having then been inspired by even older Chinese practices). She has also pointed to Japanese artistic traditions in medieval statuary, 18th century painting, but also Noh, Japan’s highly ritualized traditional theater. 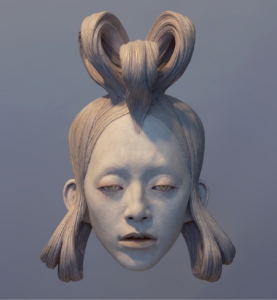 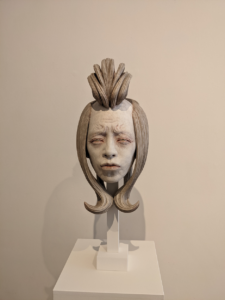 Glimpses of these influences appear throughout the show: they’re in the stylized clouds above the heads of the twin figures in Untitled no.17 (fig.4): step up close enough, and you will catch sight of demoniacal faces evoking masks of Noh theatre. The triplets of Maquette no.13 (fig.5), in their steepled, vine-like hairdos and their sinuous, overwrought stances, hands seemingly held in mudras (hand gestures) of welcome and wisdom, seem an echo to the dancing apsaras of Angkor Vat. 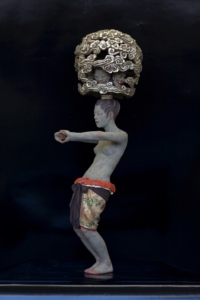 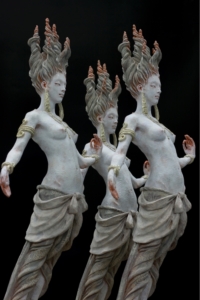 Traditions can be set in stone and weigh as such. They can also provide layers of accumulated experience to be reused and reshaped for our own growth in the present. The Story Series (fig.6), humanoid figures representing the stories of different elements—river, fire, snow, lava and sky—similarly hint at Japanese art history. The Story of the River,notably (third from left), riffs on Ogata Korin’s “Red and White Plum Blossoms,” one of Japan’s most famous paintings. Standing out for their titles, the pieces in this series also point to another crucial element in the exhibition. If spiritual renewal in the roji appears intrinsically related to introspection in observation and movement, for Shimizu, introspection is also tied to storytelling. 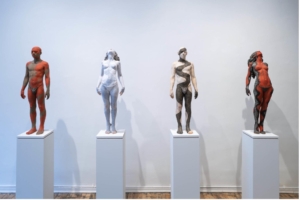 Indeed, beyond sculpture and painting, Shimizu cites as inspiration ancient Japanese texts, among which Hōjōki—the classic 12th-century essay of spiritual introspection written by Buddhist monk Kamo no Chōmei—and the Tale of the Heike, a 12th-century epic depicts the rise and fall of the Taira clan, the Genpei War, and the advent of the samurai era. Both texts explore matters dear to Buddhist philosophy, notably impermanence, the meaning of life, from drastically different angles. Shimizu’s work sprouts in the broad and terrible space opened between these texts. In Hōjōki, Chōmei reflects on the circumstances—natural disasters and famine—during which he set on a life of isolation, fleeing city life to settle in a small hut he built himself. Wealth and poverty alike will distract from spiritual enlightenment; his hermit’s life has allowed him to privilege this quest. In Shimizu’s enigmatic Untitled no.10 (fig.1), a woman, eyes closed, her face hidden under a farmer’s straw hat, frozen in an awkward, cross-ankled step, drags behind her a train on top of which lies a mokugyo, the fish-shaped wooden bell used by Buddhist monks to mark the beat to their chants. The scene seems an invitation to ponder what surfaces in the contrast between the life of hardship of a farmer—drab like the seashell powder that covers the character’s hunched over body—and the beauty of her personal experience represented in the mokugyo. It seems in part an illustration of Chōmei’s reflections: “this world is a hard place to live,” but the poor in particular find themselves hemmed in by economic circumstances and social rules; “there may be something that deeply delights you, but you cannot go ahead and express your joy.”1 Shimizu’s farmer is an even more somber take on Chōmei’s thoughts: she seems unaware of her sole earthly possession, a modest but gorgeous bell which could also be the key to her enlightenment. Her allegorical stance signifies across cultures. Walter Benjamin famously described the “angel of history… turned toward the past,” in whose events he sees “one single catastrophe which keeps piling wreckage and hurls it in front of his feet.”2 With her face turned to the everlasting present, ignoring the small treasure she has built, Shimizu’s farmer is a complete—yet similarly distressing—inversion of the angel. There is no bliss in her ignorance.

The Tale of the Heike is one of political intrigue, countless battles, executions and suicides; heads roll like apples in orchards, taken from enemies, displayed on pikes, nailed to walls, a terrible, incontrovertible proof that no man is so great that he can’t die and in the process be reduced to flesh and body parts. There is something of this utterly shocking and yet profoundly simple realization in Shimizu’s heads, displayed as they are on wooden sticks that might as well be pikes, a befuddling combination of peaceful rest and looming awe, somewhere between endless immobility and spasm, between rigor mortis and grimace, between peace and death. There are also many drownings, voluntary or otherwise, the most memorable of which possibly that of Tomomori who, faced with certain defeat, chooses to tie an anchor to his feet before jumping into the sea, followed by twenty samurai. In the text, the scene of desolation is described as a painting: “littered with abandoned red pennants and discarded red badges, the surface of the sea resembled the Tatsuta River strewn with storm-scattered autumn leaves.”3 The scene makes chosen death into a form of art.

Something akin to death lingers in the jarring uniformity of Shimizu’s figures. Her gaunt, bald-headed, loinclothed, chalk-dusted figures sometimes feel like canvasses for colorful declarations and subtleties, individualities disappearing under the tableaux they can produce. The three male figures of Maquette no.7 (fig.7), eyes closed like so many death masks, may seem to be mere pedestals for the piles of flat black stones balanced on each of their heads. Stay with them a while and the red smeared on their knees, fingers and toes will taint the scene with dread: where are they going, eyes closed, careful not to drop the stones yet possibly bruised already? The stones are a grotesque evocation of the stone paths of tea gardens, here grossly misused. As in the scene in Untitled no.10, we as spectators are given to see a path to the roji that the characters themselves are unable to reach. 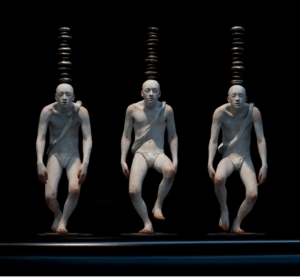 There is no easy path to peace, but there may be more than one. In Proverbs of Hell, English poet William Blake famously declared that “the road of excess leads to the palace of wisdom.” Arguably, a similar notion inspired the birth of butoh, the modern, iconoclastic dance style introduced in late 1950s Japan by choreographers intent on shaking the foundations of an art they felt to be corseted, not so much by tradition as by the way traditions can become calcified along the years. In its early years, butoh—with its emphasis on the grotesque, the ugly, the sexual—was met with awe and disgust in the Japanese mainstream, before gaining recognition in and outside Japan. Instrumental in popularizing butohabroad was choreographer Ushio Amagetsu and Sankai Juku, the troupe he founded. There are clear visual connections between them and Shimizu: Sankai Juku systematized an aesthetic—bald-headed dancers in loincloths covered in white rice powder—mirrored throughout Shimizu’s work. Arguably, they also share an iconoclastic approach to tradition. For Amagetsu, “The Japanese always need references; when they watch Noh theater or kabuki, they believe they know what they are dealing with. But in truth, they no longer understand the deep meaning of traditions and ritual.”4 Where the tea ceremony means to transcend a simple act into a spiritual path, butoh reinfuses dance with existential meaning by way of a radical practice. Butoh reminds us that art is also dangerous, and this is perhaps where it speaks most deeply, if indirectly, to Shimizu’s work. In the opening movement of Sankai Juku’s “Jomon Sho” (Homage to Prehistory—seen here in a Paris performance in 1982), a piece touching on the connections between modern humans and the history of the entire species, dancers were slowly lowered from the rafters upside down, feet tied to a rope, fluttering, cramping fingers red as if dipped in blood—virtual models for the figures in Maquette no.7. The scene is visceral, and the danger is real: during a 1984 Seattle performance of Jomon Sho, a dancer fell five stories to his death. 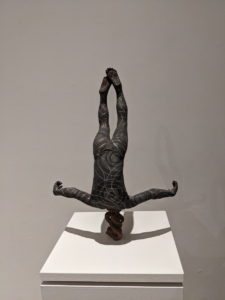 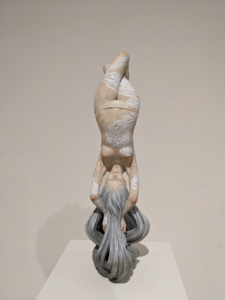 Some of the most striking statues in ROJI are upside-down figures. Most are female, their long, flowing locks a contradiction to the male figures’ bleak baldness. Alone or in groups, here in a harmonious, sinuous pose, there in careful, quasi-fetal self-embrace, they take a different path to address the concerns at the core of Sankai Juku’s art. Floating, in space or water, suggests weightlessness; but weight increases under water. For all the grace in the stances of figures in Maquette no.9 (fig. 8) and Maquette no.11 (fig.9), they seem to be pulled down by the roots of their hair—as hinted in the Tale of the Heike, sometimes a drowning can be as beautiful as nature, in spite (or perhaps because) of its horror. The opening lines of Hōjōki read as follows: “On flows the river ceaselessly, nor does its water ever stay the same. The bubbles that float upon its pools now disappear, now form anew, but never endure long. And so it is with people in this world, and with their dwellings.”5 There is danger in the garden, but there may yet be comfort enough in pondering the lesson that old rituals and the stories that bolster them teach us. By the end of Hōjōki, Chōmei comes to critique his attachment to the hut and even his writing practice: “How could I waste my days like this, describing useless pleasures?”6 Craft, art are also obstacles to enlightenment, it seems; yet we only Chōmei’s doubt because he put it into writing. His useless pleasure is there for us to amble through.

Neither people in this world nor their dwellings ever endure long. Our ways through the roji are ours and ours alone, but in a gallery, on her website or on Instagram, you should go look at what Chié Shimizu makes as she follows her own path.

Grégory Pierrot is an Associate Professor of American and African American Literature at the University of Connecticut at Stamford. His research focuses on Blackness as transnational politics and culture. He is the author of Decolonize Hipsters (OR Books, 2021), The Black Avenger in Atlantic Culture (UGA Press, 2019), and co-editor of the forthcoming An Anthology of Haitian Revolutionary Fictions (UVA Press, 2021). He is also a translator, and co-host of the Decolonize That! webcast series with Bhakti Shringarpure. His writing has appeared in Africa Is A Country, L.A. Review of Books, Libération, Public Books, Warscapes and scholarly journals such as The African American Review, Criticism, Atlantic Studies and more.