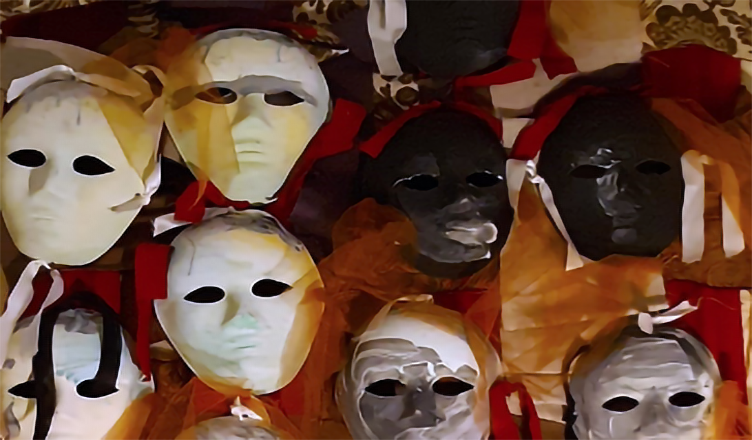 Kendra H. Oliver, “Genetic tapestry.” Woven within the background are fabrics that symbolize the shared genetics of humanity. Tied on the surface are mutations and environmental exposures that influence our genetics, but our faces, the masks shown here, are what the world sees.

Fair Warning, a thriller published in May 2020 by New York Times bestselling crime novelist, Michael Connelly, is among the first works of fiction to capitalize on the new phenomenon of direct to consumer genetic testing (DTC-GT).1 The novel involves the hunt for a serial killer, who uses stolen DNA information from a fictional company called GT23, an inexpensive direct-to-consumer genetic-testing company (modeled on real-life companies like 23andMe and Ancestry.com), to target his victims. Published not long after the identification of the Golden State Killer via genetic ancestry tracing from a DTC-GT company, the novel’s topicality makes it an ideal case for gauging the impact of popular fiction on public attitudes toward genetic testing.

Fair Warning’s Goodreads website page as of September 15, 2020 featured over 1,500 reader-generated reviews of the novel.2Using the key words “direct to consumer,” we located a sample of 150 comments that referenced the genetic testing motif in the novel. We then coded these comments for themes related to the direct-to-consumer industry, such as “liked DTC component,” “privacy concerns,” and “disillusionment with industry.” We approached the qualitative data with one question in mind: how does popular fiction inform or shape public attitudes towards the direct-to-consumer genetic-testing industry and data privacy issues?

In the novel, the protagonist often expresses his astonishment with the lack of regulation in the DTC-GT industry: “I was stunned. The report concluded that there was virtually no government oversight and regulation in the burgeoning field of genetic analytics. The government was far behind the curve.”3 Nearly a quarter of the reviews (33/150) mentioned the need for regulation in the DTC-GT industry. One reader commented that “while the FDA claims governing authority, they have not set the rules so pretty much anything goes in this brave new world of genetics.” Others called the industry “self-regulating,” with “outrageous,” “non-existent” oversight that could lead to a real-life catastrophe as it did in the novel. The fact that readers echoed Connelly’s discussion of the industry (often verbatim) indicates that they found his analysis to be both credible and worthwhile. The frequency of this theme in the reviews demonstrates that the depiction of a lack of regulation in the DTC-GT company in the novel leads readers to perceive actual risk in the real-life industry.

The novel portrays the lack of regulation of the industry as one of the reasons for the insecurity of GT23’s data. Our analysis found 87 reviews that mentioned privacy concerns, with reviewers expressing fears of “seedy” direct-to-consumer behavior and opining that “DNA isn’t used only to catch the ‘bad guy’” by “dodgy scientist bastards.” Reviewers note that the novel incited them to question what happens with their information when submitting to a real-life genetic testing company, wondering if “your identity and DNA data are up for sale.” The novel’s fictional exposé of the poor regulatory oversight of genetic data privacy clearly resonated with this audience. Additionally, it encouraged many readers to think about the security of their own data and how to be responsible consumers.

An important feature of the audience’s reactions to the issues presented in the novel is disillusionment with the DTC-GT industry. A handful of reviewers (9/150) stated that although they know friends and family who have submitted their DNA to genetic-testing services, they themselves have “zero plans” to do so after reading Fair Warning. One commenter suggests that readers should “immediately [log] on to your 23&Me profile to change research permissions”. Another proclaims: “Imma go ahead and cancel that ancestry.com DNA test. NOW!!!” Although the DTC-GT industry promotes itself as a fun way for families and friends to connect to their heritage, these reviews demonstrate that a novel has the ability to alter how this industry is perceived, turning some potential customers into advocates against these services.

Interestingly, the reviewers who expressed the need for regulation and or voiced their privacy concerns tended to rate the novel highly. High-rating reviewers also tended to appreciate Connelly’s research into the industry. 5.9% of three-star reviews, 15.7% of four-star reviews, and 24.1% of five-star reviews noted the accuracy of the novel’s portrayal of the DTC-GT industry, with one reviewer calling it “chillingly authentic.” A few reviewers revealed their prior knowledge of DNA testing and “[had] seen many law enforcement agencies use it to find a murderer in cold cases (ie: Golden State Killer).” In addition to encouraging readers to recognize the importance of genetic data security for their own lives, the novel allows its audience to recognize larger social implications of the DTC-GT industry, particularly as it relates to law enforcement.

Fair Warning does an exemplary job of exposing the risks of a booming and unregulated industry in a fictional setting. Goodreads reviewers are engaged readers that are taking these fictional lessons and applying them to the real world, whether by complaining about the lack of government oversight of the DTC-GT industry, raising concerns about genetic data privacy and security, or discontinuing their accounts with genetic testing services. On the evidence of these readers’ reviews, topical literature can influence public attitudes toward scientific issues. As a genre, crime thrillers rely on the aura of reality that they weave around their fiction. Judging from the reception of Fair Warning, readers have absorbed the story, its characters, and its polemical lessons as if the book were a convincing work of nonfiction rather than the latest in a series of detective fictions. 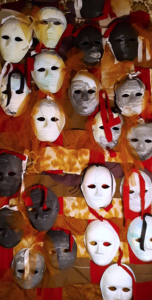 Gabija Tonkunas is an undergraduate at Vanderbilt University studying economics and philosophy. She is a research assistant at Genetic Privacy and Identity in Community Settings under the supervision of Dr. Jay Clayton and is interested in the direct-to-consumer genetic testing industry.