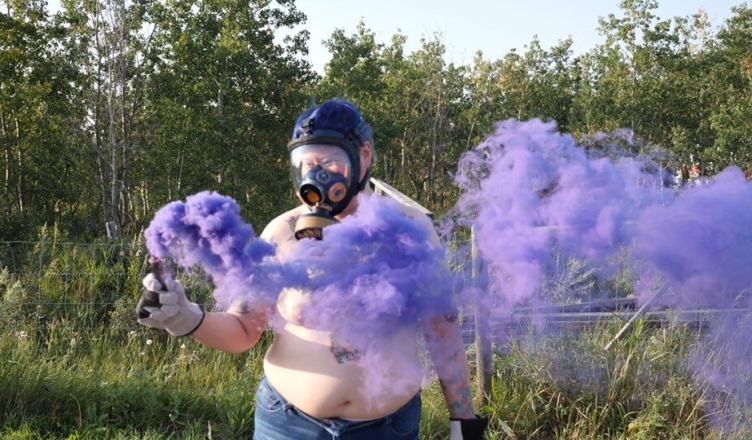 A meme can tell a story in one little square image and a handful of words. I make memes. I borrow culturally-familiar imagery such as cartoon characters (Lisa Simpson is a personal favourite), removing them from their original context, and pairing them with personal anecdotes, jokes about my life, and expressions of my political stance. Through memes, I’ve been able to share thoughts and experiences I previously had no outlet for while also witnessing the power of online interpersonal connection. Total strangers can relate to something hyper-specific and deeply personal, continuing the story by sharing, reposting, or commenting on a meme. As memes circulate and potentially go viral, they take on new and augmented meanings.

I started the Instagram page @rude_oil_pipeline in late April 2019, around two years after discovering alternative, feminist meme pages like @gothshakira and @goldnosering. Their ability to merge autotheoretical analyses with political discourse and personal details is really inspiring to me. While neither of these pages are very active right now, they both continue to inspire a new wave of memers. Characteristic amongst these meme creators is the central presence of the personal and the political implications of this fact. Memers share and hash out their stances on political, social, and cultural issues. People develop unique styles while also feeding into each other’s aesthetics, often collaborating through group chats. Memes can be cute and funny, but they can also be used to come out, critique capitalism, call for police abolition, or do all these things at once. Meming has become a processing tool through which I work out emerging elements of my identity, delve into my past, vent about daily grievances, and continually confront and renegotiate my conception of the world.

The sense of community I’ve found through this practice has helped me explore another side of myself. I participate in groups like the #queermemecoalition (formerly the #sapphicmemecollective), a growing community of memers that challenges normative conceptions of who gets to identify as sapphic. As a queer non-binary weirdo, I have felt incredibly welcomed and affirmed by this group. In addition to memeing our way through weekly topics selected by group consensus, we talk about gender, sexuality, pop culture, and swap recipes. This kind of community can be really grounding in our increasingly-digital, pandemic world where IRL connection is scarce and dangerous. The group has also endured its own share of growing pains as the politics of individual members clashes with that of the group or of individuals in the broader meme community. We have grown together in processing these conflicts and striving for greater social solidarity, particularly around issues of class and race within queer representation online.

I wanted to find a way to invite others to share in the release I feel that meming gives me. This led to the creation of my #deardiarymemes project, a subset of my meme practice. Visitors to my page are able to submit anonymous diary-style entries, which I then remediate into memes and share with the phrase “dear diary” somewhere in the image. The response to this has been really incredible, and I’m currently exploring new ways to expand the project through my graduate studies in Media at Concordia University in Montreal. The potential to blend cultural theory, politics, and personal experience within alternative memes is really special and I think more people are starting to notice.

Some of my favourite pages right now are @wantapoptart, @taylorrdenise, @isthissanjunipero, and@junnygirldecolonized. I promise you’ll be glad you clicked follow.

Piper Curtis is an intermedial artist, musician, and master’s student in Media Studies at Concordia University in Tiohtia:ke/Montreal, QC. They hold a BFA in Electroacoustic Music and Communications from Concordia, where they are researching the role of alternative, feminist Instagram memes as collaborative digital storytelling tools, and the intersectional communities that form around them. They produce music as Piper Curtis, play in the bands Sunforger and Dykea, and have performed at the international music and arts festivals the OBEY Convention (now EVERYSEEKER) and Suoni Per Il Popolo. They are the Communications Coordinator for the Digital (Im)materialities virtual conference and currently work as a research assistant on the Landscape of Hope project.