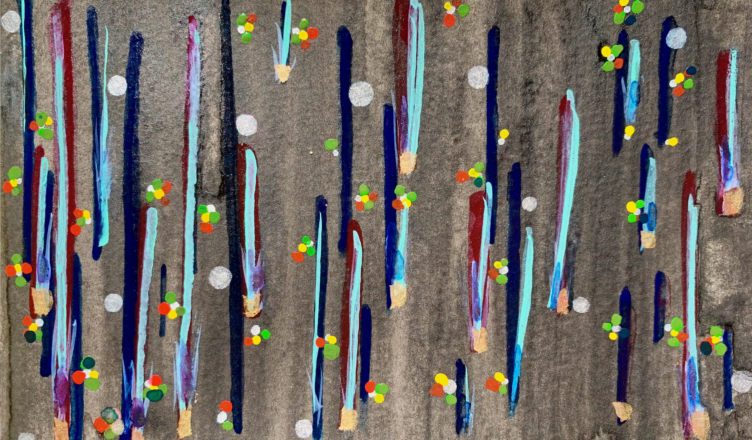 The initial aim of this collection was to foster an interdisciplinary and collaborative dialogue about estranged subjects, frameworks of visibility and invisibility, and contemporary identities in search of home. This dialogue is driven by an interest in engaging with overlooked minority groups, in particular, Mexican Japanese, an ethno-racial minority that remains outside official narratives of national identity, history and eligibility. This collection opens a space to interrogate these absences and to come together to reflect about how identities that do not fit established paradigms can be given expression. One of the initial explorations consisted of interrogating how overlooked minorities can think with each other to make sense of their experiences, despite not being present in dominant points of reference. To answer this, I wanted to examine the ways in which members of these communities are represented, if at all; whether there are invested interests in representations; and repertoires to achieve recognition, solidarity and belonging.

At a personal level, the idea of this collaborative project emerged from an eagerness to think with other Mexican Japanese about our identities, experiences and responses to people and places that make us feel at odds with our own sense of self. It began by bringing together a group of academics, artists and other practitioners who have explored Mexican Japanese matters through their work and personal experiences. Our professional occupations hint at the achieved middle-class backgrounds of the group. This leaves out a very important group of working-class Mexican Japanese, whose experiences are part of my ongoing research. However, among this middle-class group, there are Mexicans who descend from pre-war and post-war Japanese immigrants to Mexico, whose history, socio-economic background and cultural repertoires are contrasting, if also connected by related processes of social differentiation in Latin America and Japan.

With two exceptions, most of us descend from mixed marriages between Japanese and non-Japanese who made their homes in Mexico. There is one Japanese participant, born and raised in Hokkaidō, who embodies constructions of “real” Japaneseness in Mexico, even if gender, class and geographical inflections complicate this understanding in Japan. There is also a Brazilian Japanese, with whom we reflect on the differences and similarities between being a numerically small ethno-racial minority, i.e. 76,000 Mexican Japanese, and a larger one of approximately 2 million in Brazil (MOFA, 2021). This project also includes other participants of immigrant origin in Mexico, who fall either within or outside the ‘mestizo’ paradigm of national identity, built on an Euro-Amerindian composite of racial mixture. This allows us to think comparatively about the relevance of race, ethnicity, class and gender in being accepted or rejected by Mexican majority society.

In the following sections, first, I offer a brief history of migration as a state policy to ‘modernise’ the Mexican nation at the turn of the nineteenth century. In broad terms, migration functioned both as an important mechanism of mestizaje biopolitics to whiten the population, and as needed labour supply for foreign investment projects. Second, I discuss the pieces that form a part of this project, that is, the podcast, chronicle, graphic novel and conversation. Lastly, following Takezawa (2015), I elaborate on the usage of the terms Mexican Japanese, Latin American Japanese, and Nikkei as identities of resistance, which have the potential to realign the subjectivity of minorities into solidarity, in order to create movements against racism, discrimination and stigmatization.

The colonial legacy of mestizaje in the reproduction of racial categories, hierarchies and the social structure continued after independence, as Mexico’s modernization project relied on immigration and foreign investment. Mexico promoted white European immigration to solve its alleged problem of ‘scarce’ and ‘deficient’ population and unused ‘rich and vast’ lands (González Navarro, 1990). Underlying this colonization (settlement) policy was the aim of Mexican national ideologues to solve the ‘indigenous problem’ by whitening the Amerindian population through mestizaje, that is, racial, cultural and religious mixture with suitable European immigrants. However, not many colonos (settlers) arrived (Ota Mishima, 1982: 11-2). A total of 60 colonies were established with foreign immigrants as colonos (proprietors) and peones (labourers). The vast majority of colonos were from the U.S. (20), Mexico-U.S. (18) and Italy (6).

Foreign investment, mostly from the US, was assigned to the construction of railways, exploitation of mines and plantations of sugar, coffee, tobacco, rubber and fine-woods. To fill these work demands, Mexico imported Asians as peones, otherwise referred to as ‘motors of blood’. The Chinese were more numerous among this group and were often the target of anti-Asian racism veiled as fears of economic competition that sparked ‘yellow peril’ propaganda. Japanese migrants worked in mines, railroads, agriculture, fishing and small businesses. According to various accounts, they were generally seen with ‘good eyes’ and treated with less distrust than other Asians, but at times also faced antipathy. In 1905, Koreans arrived in Mexico to work in the henequen industry in Yucatán through individual contracts.

Amidst these settler and labour migrations, indigenous Mexicans continued to be subjected to low salaries, which led to a growing number of Mexicans migrating to the US, and subsequent return migration to Mexico. Amidst this, Arab and Middle Eastern migrants managed to attain a significant degree of social and economic mobility in Mexico (e.g. Alfaro-Velcamp, 2007). The pitting of Mexican nationals against labour migrants fueled xenophobia, racism and violence (e.g. Chang, 2017; García, 2014; Hernández Galindo, 2011). From 1911 to the end of WWII, there was a genocide of Asians that has been partly recognised by the Mexican state. At the same time, these policies secured the position of Mexican elites who allied with recently arrived immigrants of European origin, reproducing the social hierarchy and fostering xenophilia towards some foreigners (Salazar Anaya, 2006).

This brief history of migration, nation and race allow us to reflect on the position of Asians in the ‘colonial division of humanity’, according to which liberal modes of distinction privilege particular lives as ‘human’ and treat others as laboring, replaceable, or disposable (see Lowe, 2015). The hemispheric exclusion of Asians makes this framework applicable to the Latin American context. This entangled history reveals the inclusion of Asians as laborers in the Mexican national economic sphere, but as we see in the pieces of this cluster, they often confront racialised exclusion from political citizenship and participation in the national political and cultural space as either non-citizen, model minority, or fetish capital. This ambiguity is compounded by mestizaje which allows a relative degree of fluidity, affinity and mutuality toward different groups depending on specific family histories and social contexts.

This edition consists of four pieces besides this introduction. The first one is a podcast in which Mexican Japanese, alongside a Brazilian Japanese participant, share intimate experiences of ethno-racial exclusion, shifting meanings of (un)desirability, and the contestation of these dynamics. It is accompanied by a chronicle that delves into everyday racism and highlights shortfalls in combating it that emerged from the podcast discussion. The third piece is a graphic novel of short stories written and edited by women of Japanese, Jewish, US, Italian-Spanish and Mexican heritage. The selection of participants aims to contrast the experiences of Mexican Japanese with some of the other immigrant groups mentioned previously. Although it is limited, it creates a mosaic of diverse experiences that question the paradigm of mestizaje. These pieces, more than offering definitive answers, open questions about assimilation into mestizaje, racialised exclusion, and the (re)production of inequalities. The last piece, a conversation with Federico Navarrete draws together this collection through a discussion of the themes that cut across it. We explore the history and practices of mestizaje, whiteness, and xenophobia to offer another perspective to this collection.

Finally, even though Nikkei is often used to refer to people of Japanese descent in the Americas, we have chosen to refer to this group as Mexican Japanese, or Brazilian Japanese. We use these identifications as a shorthand because most Mexicans of Japanese ancestry identify themselves primarily as Mexican. Nikkei remains a selected identity that tends to exclude ‘mixed’ ethnic-Japanese of a lower social class, while even ‘genuine’, middle-class Nikkei are excluded from belonging as Japanese. This partly derives from racial notions of ‘degeneration’ through cultural, environmental and biological admixture. However, Nikkei can become an oppositional identity to challenge racism if it moves beyond its narrow definition and accounts for the diversity of its diaspora. This requires recognizing the global history of Japanese migration, and that there are multiple ways of being ethnic-Japanese (Nikkei) in the world. As Hazel Carby remarks in her intimate history of racial encounters at the Jamaican margins of the British metropole, migration entails movement and transformation, and the potential to generate interconnections.

Jessica A. Fernández de Lara Harada is a Ph.D. candidate and Gates Cambridge scholar at the University of Cambridge. Her research focuses on the experiences of Mexicans of Japanese descent of mestizaje (the racial mixture discourse of national identity in Latin America). Her research interests include transpacific migrations, nation-state formation, and race and ethnic relations in Mexico.