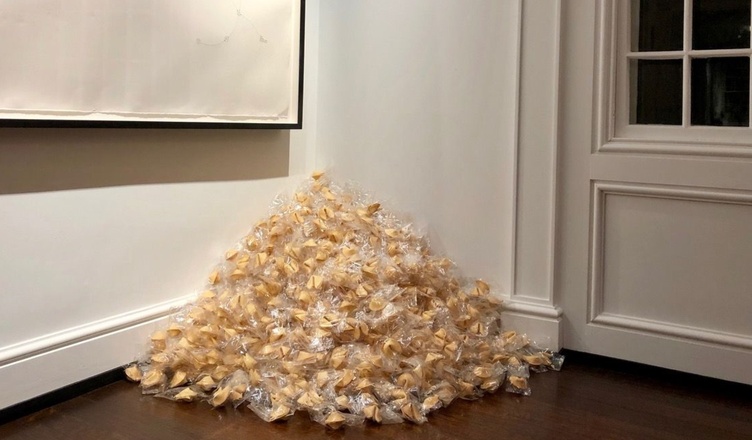 Between May 25 and July 5 this summer, Andrea Rosen Gallery and David Zwirner jointly presented Felix-Gonzalez-Torres’s 1990 “Untitled” (Fortune Cookie Corner) across several hundred locations of various kinds all around the world, from Hamburg, to Mexico City, to Seoul.

As always with Gonzalez-Torres’s work, the parameters of the exhibition are carefully spelled out in the letter inviting participation. The exhibition was curated by Andrea Rosen, to whom the owner delegated the relevant rights of decision and interpretation: the work is what is shown across its various “places,” each initially composed of a pile of 240–1,000 fortune cookies regenerated midway through the exhibition, with those “places” collectively amounting its “site” (so no particular place can claim to be a showing of the work but is simply a part of it). It is worth noting that the relevant certificate of authenticity does not demand this conceptualization of the work’s manifestation. The same 350-odd piles of cookies could have been posed as 350-odd simultaneous but individual showings of the work, so framing all individual showings as a single manifestation is a distinct curatorial decision of the sort Gonzalez-Torres’s certificates typically entail. Exhibitors were encouraged to submit documentation to Rosen and Zwirner to be shown online on the gallery websites as well as the newly launched site for the Felix Gonzalez-Torres Foundation; documentation of unofficial but related installations are also displayed separately on these sites, and participants have been encouraged to make whatever use they wished of social media. 1

I have no idea how Gonzalez-Torres found his way to the word “manifestation.”  The only art historical precedent I have ready to hand is Buren, Mosset, Parmentier, Toroni in 1967, and they are clearly using the word partly to capture what’s performative in their appearance, but above all as a way of underlining the relation between painting and showing that is what the performance is all about; the underlying interests here seem to me of very much the same order. It is in any case, an interesting and somewhat etymologically obscure word, compounded of manus (hand) and festus, which is less clear (perhaps something like “struck” or perhaps related to something like “ability”)—the OED suggests that the root sense is “palpable,” although it now means above all open and visible, fully present.  Just this crossing of touch and sight seems absolutely to the point.

Among the participating places were two located in Norfolk, Connecticut—one at the home of the sculptor Tom Burr and his partner Bill Dobbins, and another at the home of the art historian and critic Robert Hobbs and curator and gallerist Jean Crutchfield.  If the AIDS pandemic was the overwhelming context of Gonzalez-Torres’s life and art, this manifestation of this particular work had as its deliberate context the current COVID pandemic; in Norfolk this importantly included among its effects the cancellation of Yale’s longstanding and distinguished Summer Art School.  In nearby Hartford, Patricia Hickson, curator of contemporary art at Hartford’s temporarily closed Wadsworth Athenaeum, also participated, setting up a pile at her home.  These three parts of the work were interestingly different: the Hobbs pile was in a distinctly interior and private location, set carefully below a Robert Smithson collage, while Hickson set her pile in the elevator lobby of an essentially public building including both her residence and a number of offices, and the Burr pile was literally liminal, spilling down the bottom steps of a flight of stairs descending from a bedroom and giving directly onto an exterior door.

The Hobbs installation explicitly underlined Gonzalez-Torre’s relation to Robert Smithson.  All three of the local places were, in fact, corner pieces, and in this form the relation to Smithson is a leading feature of one’s experience of it.  Interestingly, while “Corner” does figure explicitly in the work’s subtitle, that location is not enforced in the installation guidelines (that it should be experienced as a spill or pour in any configuration seems inevitable given the materials). Gonzalez-Torres’s further choices for such pieces, and specifically for this piece, pull the work away from Smithson’s particular concern with spatial displacements and the distinctively inhuman geological imaginations of temporality he unpacks through them, and enter it into a much more futurally oriented and human time of loss and regeneration.  That the viewer is in some sense integral to the piece is, like the availability of the corner as a site for work, a direct consequence of the minimalism that importantly reset the formal parameters for the art of both Smithson and Gonzalez-Torres.

Reshowing this work now in the midst of the COVID-19 pandemic both repeats and transforms the questions of intimacy and publicness, the ambiguities of touch and closeness and gift, that appear integral to it. But the new context also of course also transforms them: the three different situations of the Norfolk/Hartford pieces answer to the COVID universe of social distance and public lockdown in ways that do and do not fit with the play of open and closed, publicity, privacy and intimacy in the age of AIDS, and the choices a participant makes in installing some part of “Untitled” (Fortune Cookie Corner) map onto public conversation and action in ways very different from that earlier moment—ways that significantly shift the terms of its visibility, its being manifest, and so make a particular sense of showing it in this scattered form (inaccessibility becomes a dimension of it).

Much less predictably, its showing now has turned out to generate or reawaken in a radically new form the complex crossings of disease and politics that shaped the AIDS crisis, and that have now deeply entangled COVID and the political and institutional response to it, with the mass breakthrough of Black Lives Matter, as well as the subsequent weird and still shifting folding back of those protests into questions of social reopening, partisan political rallies, and even a suddenly virulent politics of masking.  The moment is hard enough to grasp simply in itself, let alone as a transformation of some earlier moment, but the responsiveness to it of Gonzalez-Torres’s simple piles of cellophane-wrapped cookies is more than clear.

What may be less immediately clear in is that there is no making sense of this without also talking about the Internet. The Internet (and its own endemic forms of virality) was of course not a fact of Gonzalez-Torres’s life (he died in 1996) but it has been a dominant fact of ours for some time now and has become only more central as the country has otherwise closed down. Its ubiquity seems essential even to the bare idea of manifesting “Untitled” (Fortune Cookie Corner) in the form Rosen has given it, but this means that it is reworked by the web’s radical reconfiguration of public and private as well as its uncanny separation of touch and vision. Seeing this is perhaps enough to open the door to one particular observation about Gonzalez-Torres’s work. Although it has been said from the beginning that the work finds its completion in the viewer’s participation, that is for the most part a notably indeterminate and unexacting kind of completion. I take a cookie, I eat it, throw it away, tuck into a drawer and forget it, set it out on a little shelf of its own… But what this piece’s current manifestation may seem to show is something about how Gonzalez-Torres’s work is peculiarly open to a certain kind of curatorial completion.  This is not, I think, a matter of a general invitation to external participation, consumption, etc., but of an essential porousness that demands curation and, through it, a much more determinate kind of completion. “Porousness” is phenomenologically the wrong word2—there’s nothing one can point to in the object or one’s experience of it that has this feel exactly—but it seems nonetheless structurally right: the work draws in what surrounds it, makes itself partly of that.3

This feels to me both like a new discovery and something that has always been true but mostly inadequately remarked of Gonzalez-Torre’s work, as if it gets repeatedly lost in the apparently larger but emptier thought that the viewer/participant completes the work.  I can think, for example, of the juxtaposition of Tom Burr’s Deep Purple (2000) and its pivotal invocation of Serra, with Gonzalez-Torres’s “Untitled” (Water) in Queer Abstraction at the Des Moines Art Center (2019), or, more elaborately, of Helen Molesworth’s smart placement of his work in her expansive revision of Marcel Duchamp and his consequence in Part Object Part Sculpture.4Certainly Elena Filipovic’s extraordinary retrospective suite Specific Objects without Specific Form (2016) is made entirely of this recognition which it also never quite directly names.5 It seems to me now that I certainly should have started thinking about this when I saw his collaboration with Louise Lawler recreated for her retrospective at MOMA several years ago6 and before that when I saw her photograph of a string of his lightbulbs awaiting installation at Ohio State’s Wexner Center.7 What they share is a deep interest in what it means for work to be manifest, to show, and they both work the ways in which nothing shows by itself but only ever in relation. They of course work this thought in very different ways and materials, but what is perhaps most strikingly shared across those differences is constant connection of touching and seeing.

Stephen Melville is Professor Emeritus of the History of Art at The Ohio State University and has written widely on art history and contemporary art.