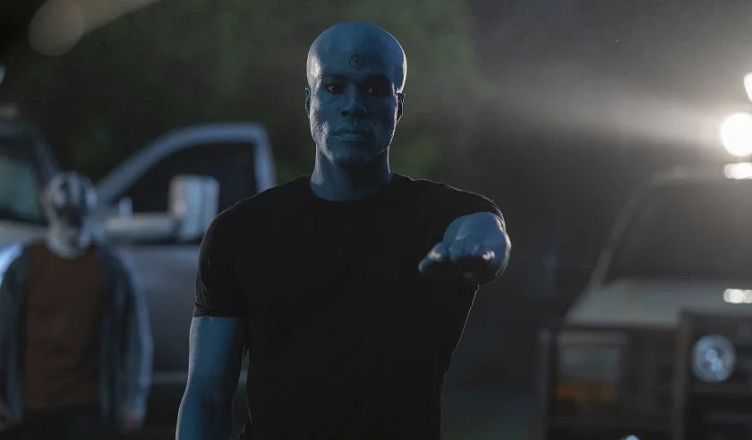 In 1986 the idea of a global cataclysm seemed depressingly possible. The doomsday clock maintained by Bulletin of Atomic Sciences ticked ever closer to midnight as the USSR and the USA engaged in an unprecedented arms buildup that made nuclear annihilation the most logical outcome of the Cold War. AIDS, which was then still considered a gay plague, burgeoned on four continents on both sides of the Atlantic, while the threat of environmental destruction loomed with the recent discovery of a hole in the ozone. When its first issue appeared in the summer of 1986, the tone of Alan Moore and Dave Gibbons’ comic opus Watchmen matched this apocalyptic time. An ambitious if despairing reworking of the trope of the hero, the Watchmen comic included a megalomaniacal president hell-bent on winning a seemingly intractable war against Communism, the unruly street culture that defined cities like New York and London in the 1980s, a patriarchal political culture that ignored both sexual assault and rampant homophobia, and a police union more concerned with preserving their monopoly on state-sanctioned violence than preventing crime. Race is perhaps the only topic that Watchmen fails to address explicitly, but this seems fitting given the background of Moore and Gibbons—at the time two left-wing thirty-something white Brits with no connection to either the African American or Afro-Caribbean communities in the USA or the UK.

The Watchmen comic suggests that a massive external threat might be the only way to break the deadlock between the USA and the USSR, global empires that dominated the political imagination of the rest of the world during this period. And so Ozymandias, the antagonist of the 1986 series, sets about creating just such a threat. HBO’s Watchmen—Damon Lindelof’s sequel of sorts set thirty years after the events chronicled in the groundbreaking comic—reorients the political concerns of the original series by placing white supremacist racial discrimination and the threat posed by capitalist technocrats at the center of its narrative. Indeed, the television show replaces the logic of the Cold War with the lingering aftermath of the Tulsa Massacre of 1921 as its organizing crisis. This correction—reportedly inspired by research Lindelof undertook after reading Ta-Nehisi Coates’s essay “The Case for Reparations”—allows the HBO show to exchange the threat of nuclear annihilation with a crisis more suited to our contemporary moment. But this shift also allows us to reevaluate the political logics that obtained in the 1980s and doing so reveals that in the real world—in addition to threatening humanity with extinction—the Cold War in fact served as a massive external threat that kept the equally destructive forces of racism and ethno-nationalism at bay.

It is a delicious irony that Moore and Gibbons’ Watchmen largely ignores race because it’s now clear that the politics of the Cold War unintentionally submerged an embrace of what we now understand as ethnic nationalism across the globe. However despicable his personal views towards so-called minorities, when in 1986 Ronald Reagan signed the Immigration Reform and Control Act at the foot of the Statue of Liberty, he did so while proclaiming that its passage demonstrated that the USA was in fact a “free and open society.” In essence, Reagan endorsed a bill granting citizenship to millions of people of color who entered the nation without documentation largely because the USA’s ideological competition with the USSR forced his hand. Unsurprisingly, Republicans like Ted Cruz—whose family benefited from a government supported program of accelerated citizenship specifically designed to undermine the Communism advocated by Soviet Russia—now roundly denounce this kind of Reaganite immigration reform. Indeed, free of the threat represented by the Soviet Bloc, the GOP enthusiastically corrals undocumented immigrants into internment camps rather than incorporating them into the polity.

Similarly, across the globe a number of prominent politicians now embrace policies explicitly designed to harm ethnic and racial minorities in ways that would have never been countenanced during the Cold War. From Viktor Orbán in Hungary to Bashar al-Assad in Syria to Narendra Modi in India to Jair Bolsonaro in Brazil to Matteo Salvini in Italy to Recep Erdoğan in Turkey to Rodrigo Duterte in the Philippines to Aung San Suu Kyi in Myanmar to Xi Jinping in China to Donald Trump in the USA to Boris Johnson in the United Kingdom, the relative restraint enforced by the external threat of nuclear war has been replaced by a ravening desire to assert repressive and violent hierarchies that scapegoat ethnic and racial minorities as a way to accrue political power. Lindelof’s Watchmen posits an embrace of multiracial and multiethnic citizenship as a necessary corrective to the kind of ethno-supremacist politics that now threatens civil society across the globe, in part by making protagonist Angela Abar (Regina King) both the adoptive mother of two white and one Latino child and a police officer born outside the continental United States. While several commentators have accused Lindeloff and his team of writers—which include a number of African American collaborators, including Cord Jefferson, Stephen Williams who co-wrote and directed the phenomenal episode “This Extraordinary Being” and Christal Henry, a former officer with the Chicago PD—of bad faith by making police officers the focus of the series, it’s difficult to see how the show could have extended Alan Moore’s critique of authority without foregrounding the role that law enforcement plays in supporting the status quo.

There is in fact nothing incongruous about African Americans attempting to reform the USA through demonstrations of patriotism. As the USA entered WWI WEB DuBois instructed the NAACP to hold off on agitating for Civil Rights, trusting that Black soldiers would build an ironclad case for full citizenship by serving valorously in the Great War. Of course, as Lindelof documents, German propaganda reminded Black soldiers of their second-class status in the US, and when they returned home white supremacist violence designed to subjugate Black veterans—including the Tulsa Massacre dashed DuBois’s hopes. By making Tulsa the central locale of his iteration of Watchmen, Lindelof reminds his viewers that racist violence represents not just a failure of the credo chanted by Northern soldiers during the Civil War—Union!—but also a betrayal of the dreams of Black Americans. Critics who castigate Lindelof for this approach fail to acknowledge that every year hundreds of African Americans like Will Reeves (Louis Gossett, Jr.) join police forces across this nation with the sincere intention to change them from the inside. If you’re interested in seeing Black people as fully rounded human beings and not sterile symbols of false consciousness, it’s difficult to blame these citizens for their naïveté when even the unimpeachable DuBois once succumbed to the same vain hope that Black service might redeem a fallen America.

HBO’s Watchmen in fact tells an inter-generational story of African Americans—a group that provocatively includes Dr. Manhattan (Yahya Abdul-Mateen, II)—experiencing disappointment and disillusion again and again after putting their lives in service of the state. This establishes a depressing but historically accurate continuity that demonstrates how racial injustice continues to erode Black American possibilities for citizenship. This story links Black WWI veteran OB Williams (Steven G. Norfleet), his son Will Reeves (also played by Jovan Adepo) and Reeves’s granddaughter Angela through their shared trauma after encountering state sanctioned white supremacy. In Watchmen’s parallel 2019—as in our own reality—widespread indifference to the fate of racialized others driven by the seductive persistence of white supremacy threatens the political and social fabric of the nation. This threat is emblematized by Senator Joe Keene (James Wolk) a genial politician who looks like a cross between Pete Buttigieg and Donald Trump, Jr. Keene is a member of the 5th Calvary, a clandestine group of racists descended from Cyclops—the white supremacist organization that drove Will Reeves to become the masked vigilante Hooded Justice after he joined the NYPD in the 1930s. Sadly, Watchmen‘s fictional continuities resonate with our own. Watchmen makes the connections between law enforcement and white supremacy explicit in ways seldom seen in popular culture.

HBO’s Watchmen offers a resolution that from one point of view seems hopeful, but then so did the comic series. And yet, despite Adrian Veidt’s (Jeremy Irons) triumphant declaration in the 1986 comic, humanity in this alternative 2019 seems no nobler or altruistic despite banding together to resist the continuing threat of interdimensional violence. Indeed to look for meaning in the deliberately inconclusive conclusion of the first and only season of Watchmen is to miss the larger point the series is trying to make.

With Watchmen Lindelof advances a reparative project akin to the kind of emancipatory revisionist undertaking offered by Coates in “The Case for Reparations” or Nicole Hannah-Jones’s recent 1619 project. The overwhelming interest in these revisionist histories, along with the utter disdain displayed towards them by those on the right suggest that these efforts are hitting their mark. The bad faith complaints about the show assume either that white Americans are incapable of grappling with the shortcomings of their history or that white Americans—and not just the 40% that continue to stick with Trump—will unthinkingly embrace and celebrate the white supremacist violence that society has hidden from them.

The truth is sadder still. Despite the enthusiastic consumption of the hard truths offered by figures like Lindelof and Jones and Coates there remains a lack of political will to root out white supremacy. So while Lindelof’s belief in a multiracial coalitional government motivates him today just as sincerely as Alan Moore’s belief in popular anarchy as the ideal form of government did in the 80s, their visions will prove insufficient. After all, the Watchmen comic was in part a response to both Reagan and Thatcher winning reelection by a landslide, and yet despite its thoroughgoing critique and enduring popularity Boris Johnson recently surpassed Thatcher’s margin of victory by engaging in a campaign that explicitly asked Britons to reject any sense of solidarity with those who live beyond their boarders and many who live within them.  This result has cast an ominous pall over the US’ own drawn out political season. As with the comic that inspired it, HBO’s Watchmen insists that we understand how the history of the past thirty years has driven us to this point, but this clarity remains an insufficient remedy to forestall the destructive forces that animate those driven to remake the world in their image.