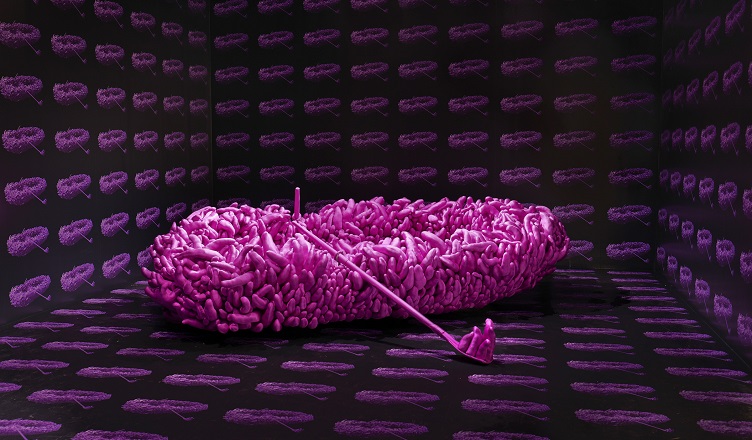 In 1957, Yayoi Kusama set fire to several hundred pieces of her work and moved to the U.S. She never intended to return to Japan, though sixteen years later she would. In her autobiography, she recalls her resolve: “For art like mine…this country was too small”—too small even to leave any of it behind there, so she burned everything she could not take with her to show at the Zoë Dusanne Gallery in Seattle.1

For an artist preoccupied by infinity, this gesture strikes me as brutally final. I imagine her turning her back on the smoldering ashes and boarding a plane. In the reel of this scene that plays in my head, she stares directly at the camera, unsmiling, as she does in so many now-iconic photographs.2

Something in that deadpan gaze reconciles the act of symbolic self-immolation with a lifelong program of stylized “self-obliteration” that has come to characterize Kusama’s work. A mere two years later, she’d be lighting up the New York art world, arriving like an incendiary and leaving incandescent.

Kusama’s New York period, spanning the 1960s and early seventies, has largely defined her image. She produced her famous Net paintings and Accumulation sculptures during these years. In 1965, she debuted her first mirror room, Phalli’s Field. She had receded from the avant-garde scene by 1973, when she moved back to Japan. There, her work shifted direction from the participatory to the voyeuristic, from spectacular to insular. This transition hardly marks the end of her career—Kusama remains prolific today—but it certainly coincides with the end of an era in which corporeality and tactility predominate in both the artist’s process and our experience of her work. Every major Kusama exhibition casts a wistful, retrospective gaze on this moment.

The latest North American exhibition—one of the most popular gallery tours ever—is no exception. Organized by the Hirshhorn Museum and Sculpture Garden in Washington DC and traveling to five major cities (Seattle, Los Angeles, Toronto, Cleveland, and Atlanta) between 2017 and 2019, Yayoi Kusama: Infinity Mirrors mines and mourns an embellished history of the mirror rooms as fully immersive, experimental art spaces.

Curator Mika Yoshitake explains the guiding concept of the exhibition using the phrase “body memories.” The mirror rooms, she contends, “demonstrate how the body mediates the world when subject and object are in parity” at “the edge of awareness.”3 The rooms achieve this effect by situating finite experience—the allotted twenty or thirty seconds per museumgoer per room—adjacent the visually infinite expanses within. Once guests step outside each room, however, the destabilizing juxtaposition that Yoshitake associates with boundless, atemporal movement, or infinite projection, is superseded by a fairly linear timeline of Kusama’s work—not to mention lines of people, moving through the gallery with the clear telos of seeing, photographing, and Instagramming it all.

Though the mirror rooms have been closely associated with Kusama’s 1960s oeuvre, this connection is somewhat mythological. In truth, she created and/or reinvented all of her infinity mirror rooms much later—some as recently as 2016. The mirror rooms are scattered throughout the gallery, disrupting the chronology presented by the timeline, while the paintings, soft sculptures, film, and media exhibits that surround them ground visitors squarely in the psychedelic milieu that frames Kusama’s most productive period. One is thus encouraged to move through the gallery space as through a time warp, invited now and then to step out of time briefly by entering one of the mirror rooms.

In Time Binds, Elizabeth Freeman argues that asynchronous or non-sequential temporal logics can put the past in meaningful dialogue with the present and make space for embodied experience that is out of sync with the capitalist organization of bodies toward productivity.4 There is no economical way to navigate this exhibition; it takes all day. And it does feel a little like taking a liberating step out of time to spend a moment in one of these 13x9x9 boxes of light and delight, but it also feels like stepping back in time. Once you have paused to take in the photographic love-in adorning the gallery walls—the artist herself prone in a field of phallic tubers, stopping traffic on the Brooklyn Bridge to protest war in Vietnam, painting polka dots onto nude buttocks, or blissed out in the Endless Love room—you are keenly aware of Kusama’s physical absence as the quintessential body that performs the pleasure of infinite space. You become aware, too, of what your body is not permitted do in infinite space.

The fetishization of the infinity mirror rooms taps into common nostalgia for a moment when attending to Kusama’s art involved much more tactile interaction than recent exhibitions, in their runaway popularity, can facilitate. The 1965 installation of Phalli’s Field, for instance, was designed for people to “walk barefoot through the phallus meadow,” touching and feeling the stuffed tubers as they “experience[d] their own figures and movements as part of the sculpture.”5 Eikoh Hosoe’s photographs from Floor Show, Kusama’s first solo exhibition at the Castellane Gallery in New York, capture this aspect of the work, depicting the artist and others sitting, standing, and rolling around in the plush enclosure, the field of their vision expanded by the mirrors. Love Forever, a scaled-down replica of the hexagonal chamber Kusama built in 1966 for Kusama’s Peep Show, or Endless Love Show, was originally envisioned as a room large enough for people to roam through as well as peer into. It had an auditory component. Dancing was encouraged. Kusama’s Self-Obliteration, a film all twenty minutes of which loops in a room adjacent the main gallery, is an intoxicating romp through idyllic fields and sexy parties, where Kusama rides a polka-dotted horse and performers smear their painted polka dots onto one another as they touch.

Today’s installations are tightly run little time machines, surveilled and regulated by museum staff. Lingering is impossible, contact forbidden. Hardly anything can be heard above the din of record-breaking crowds. It occurs to most visitors to try and capture the moment by taking a selfie or two, though this activity has been much maligned in the popular press.6 Many argue that the exhibition is a victim of its own success.7

I cannot help but dwell on the tension that surfaces when so much of the hype surrounding Infinity Mirrors insists that “the body’s phenomenological encounter with space is central” while most of the rooms featured offer primarily visual spectacles, the body struck dumb and then brusquely ushered along.8 Perhaps the exhibition is less about the way the body remembers than the way we remember the body as the seat of experience in the last days before mainstream digital reproduction.

Bodies move through these whimsical spaces governed by what appears to be a shallow drive toward photographic reproduction and digital redistribution via social media, a compulsive “I was there”-ism. On the one hand, a seconds-long dip into each art environment expressly prohibits a deep dive and, thus, produces longing for a mostly fictive past when such an experience of this particular art was available. On the other, the guerilla proliferation of amateur images across social media accounts and platforms adds a layer of depth to the work. Gloria Sutton proposes we understand this “replication of forms or structures through digital techniques” as akin “to the way that Kusama uses analog techniques of repetition and patterning to construct a…representation of subjective experience.”9 Sutton points out that the long arc of Kusama’s career reveals a migrating interest from “the modernist viewing subject” and firsthand experience toward “communication networks” and virtual extensions of empirical knowledge.10 In other words, the promise of human connection underwriting Kusama’s work in the sixties resurfaces in the newer installations and reinstallations via the gradual accumulation of images that both fragments the work in isolated acts of “selfie-obliteration” and composes it, using the internet as a kind of infinity net to gather them all.11 It makes sense that Kusama, obsessed with the polka dot, would turn her attention to the pixel.

It’s not clear when, or why, Kusama changed the collective title of her Net paintings from “Interminable Nets” to “Infinity Nets,” but I think the connotations are important. The interminable is tedious, wearisome; we suffer the interminable. The infinite is unlimited, open, and vast. It suffers the limitations of human perspective. When American artist Sidney Tillim saw these paintings for the first time, he observed, “What comes through…is no longer a naturalistic space but something like the memory of the place where things used to be rather than a void in which anything can happen.”12 The infinity mirror rooms, too, strike me as this sort of space, wherein we remember the body’s vital role in mediating experience and discover that we are not quite freed or ready to be freed from it.

Shannon Finck is a lecturer in English at the University of West Georgia and Poetry Editor of the independent literary journal, Muse/A. Her Ph.D. is in transatlantic modernism with a secondary emphasis in global postmodern and contemporary literatures (Georgia State University, 2014). She also has an M.F.A. in narrative nonfiction and poetry (Georgia College, 2007). Shannon’s critical and creative work has appeared in such journals as Angelaki, Miranda, a/b: Autobiography Studies, LIT: Literature Interpretation Theory, The Journal of Modern Literature, The Florida Review, and FUGUE. She is currently working on a book about experimental life writing called Thin Skin: Autotheory and Resilience.