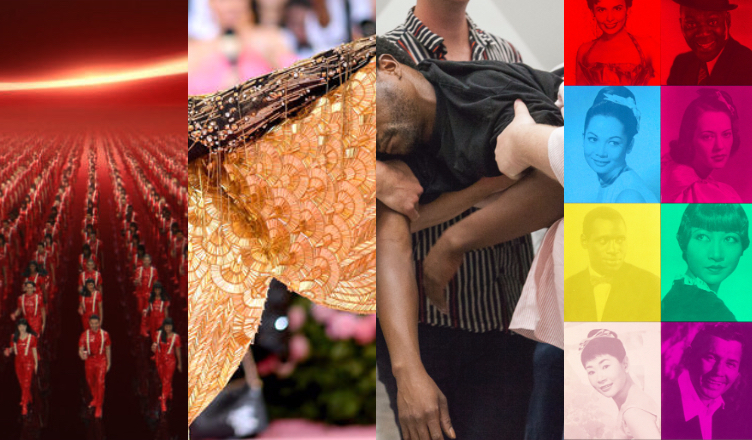 On May 6, 2019 Billy Porter entered a tent over the stairs of the Metropolitan Museum of Art wrapped from head to toe in gold and slowly carried on a litter by six shirtless men in golden trousers and boots.1 As reporters and photographers shouted his name asking him to pose for the camera, he remained sphinx like, reclining, and refusing to rush his entrance—after all, he was dressed as an Egyptian god. 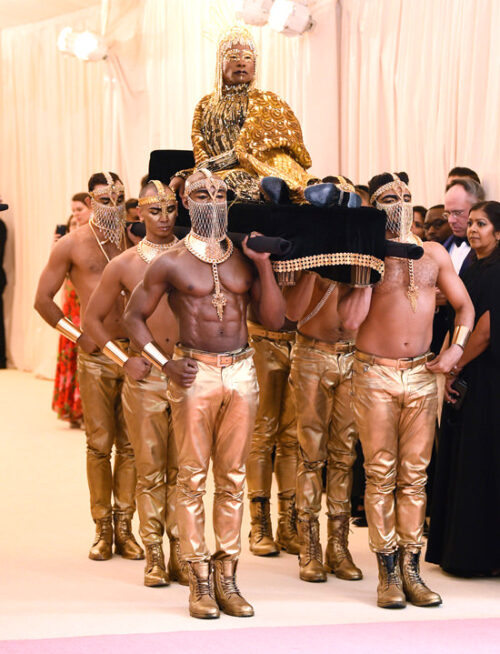 His attendants performed a slow series of gestures, tilting their heads back as through worshipping the sun and moving their arms “robot” style into poses resembling ancient Egyptian paintings as one called the count—part drill sergeant, part dance captain. Only then was the litter lowered and Porter descended slowly from his throne. He took his time unfurling his golden wings to reveal a gold spangled bodysuit. Then he floated up the stairs. Porter’s performance, a collaboration with stylist Sam Ratelle, was the performer/singer/actor’s debut at the Met Gala, which in 2019 was celebrating the opening of the Costume Institute exhibition Camp: Notes on Fashion. Porter was the most multivalent and exuberant embodiment of camp on the pink carpet, exposing the complexities and politics of camp that were absent in the exhibition.

Susan Sontag’s “Notes on Camp” (1964) served as a spine for the Met’s exhibition, and appeared to be a text consulted by many of the Gala’s guests and their stylists.2 While Sontag acknowledges that camp is a queer aesthetic, she notably claims that it is not political: “it goes without saying that the Camp sensibility is disengaged, depoliticized—or at least apolitical.”3 What is neglected by Sontag is the fact that camp is an aesthetic strategy to survive marginalization, as Richard Dyer noted: “camp kept, and keeps, a lot of gay men going.”4 While the exhibition highlighted some queer histories, within its Plexiglas vitrines, the Met’s institutional presentation of camp was markedly white and largely de-politicized.5 Figures noted by Dyer, such as Sylvester and Little Richard, were absent from the exhibition, as were the queer communities of color represented in Pose, the TV show Porter helms.6 This exclusion was eloquently underlined through text printed on the back of Lena Waithe’s Kerby Jean-Raymond zoot suit: “Black Drag Queens Inventend [sic] Camp.” Designers of color occupied marginal positions in the exhibition (quite literally) and, as Dyer warns, women were largely objectified rather than celebrated as practitioners of camp culture.7 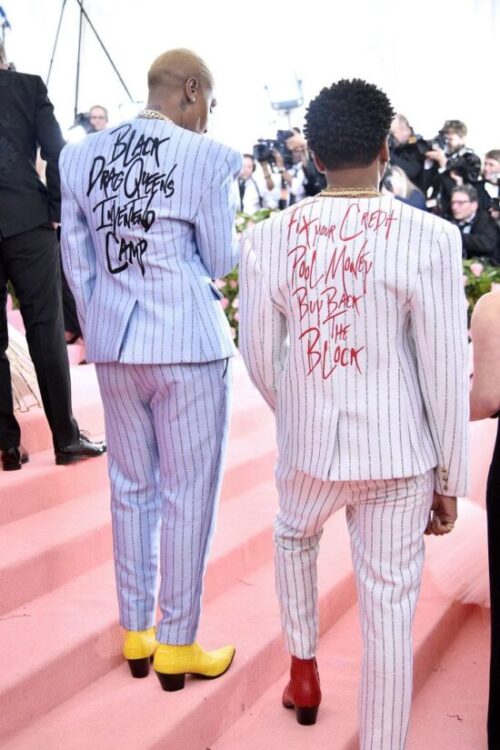 Porter’s performance offered camp as a more radical strategy. He told Vogue that Ryan Murphy had suggested he dress in all of the looks Diana Ross wears as a fashion model in an iconic montage scene in the film Mahogany.8 Murphy was suggesting a traditional drag performance, but the actor in collaboration with Ratelle, chose a more complex mode of genderfuck or gender fluid fashion for the red carpet.9 As Ratelle said, he’s not a drag queen, “he is himself wearing whatever he wants…he’s a man in a dress.”10 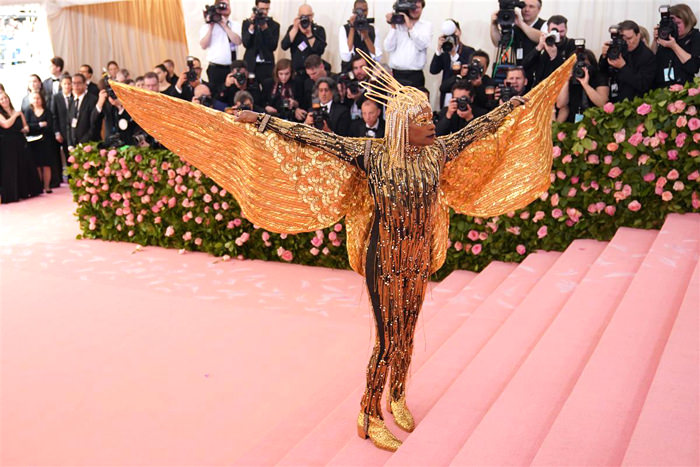 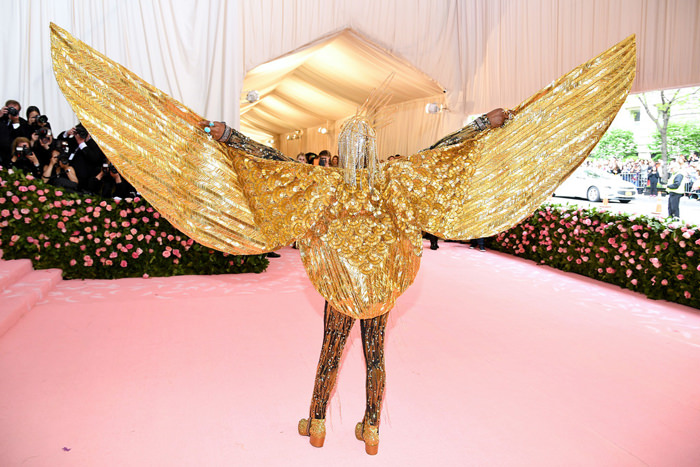 Rather than Diana Ross drag, Porter and Ratelle honed in on Ross’s Egyptian look in the montage, commissioning The Blonds (designer Phillipe Blond and Creative Director David Blond) to create a look fit for an Egyptian god.11 Ratelle described the Blonds as, “the new Bob Mackie,” and noted the significance of working with the pair of emerging designers who are gay and Latinx.12 The spangled bodysuit and winged cape they created were androgynous.13 The design referenced Mahogany loosely and twentieth century citations of Ancient Egypt in visual culture. For instance, Meta Vaux Warrick Fuller’s Ethiopia (1921) and Aaron Douglas’s Building More Stately Mansions (1944) drew on Ancient Egypt as artistic heritage for modern Black artists at a time when white Art Deco designers were enraptured by Egyptomania.

Porter’s golden wings were clearly inspired by the ones worn by Elizabeth Taylor as the title character in Cleopatra (1963). His cool reserve in the face of shouting photographers and onlookers mirrors Taylor’s performance when she slowly enters Rome on a giant sphinx float pulled by an army of men and surrounded by cheering Romans. Both performers completely upend the traditional power dynamics of the spaces they enter by embracing the notion of camp as excess and as a performance of self.

But the presence of Porter, a Black gay man costumed as an Egyptian god inside the Temple of Dendur at the Met goes further, constructing Ancient Egypt as a space of queer Black liberation.14 It’s not just the fabulousness of Diana Ross in a fashion montage, or the excessive trappings of Elizabeth Taylor in a sword and sandals epic, but Ancient Egypt itself that is camp: the elaborate rituals for the dead, being buried with your possessions and pets, all of those gold and turquoise accessories! The camping of Ancient Egypt, which represents one of the most significant parts of the Met’s collection, is a way of taking the air out of the Museum’s sails. It takes the serious study and categorization of an ancient civilization that is positioned literally as a corner stone of the Museum’s documentation of the history of Western Civilization and queers it by reminding viewers that Ancient Egypt is neither white nor straight. Porter plays up the artifice and exposes the contradictions within the constructions of masculinity, power, and race at the center of the project of the Metropolitan Museum’s presentation of art history. Porter’s entrance isn’t just campy; it demystifies, de-mythifies, and upends the structure of the Museum itself. Significantly he does so with fashion and performance—practices that are marginalized within the institution itself. His performance enacts what the Met’s exhibition on camp refused to do: a powerful decentering of straight white masculinity and a re-visioning of history as Black and queer. Porter has slayed on his first outing to the Met Gala.

Victoria Rose Pass is an Assistant Professor of Design and Art History at the Maryland Institute College of Art. She co-edited Design History Beyond the Canon (Bloomsbury, 2019) with Jennifer Kaufmann-Buhler and Christopher S. Wilson. It includes her essay, “The Mangbetu Coiffure: A Story of Cars, Hats, Branding, and Appropriation.” She also co-edited Women’s Magazines in Print and New Media with Noliwe Rooks and Ayana Weekley (Routledge, 2016), which included her essay, “Encountering Africa in Vogue: Irving Penn’s African Essays.”