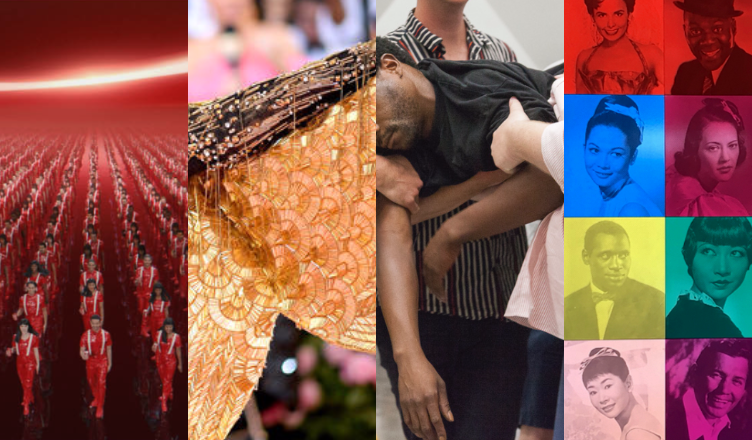 I knew that he was in there somewhere. The streets told me so. I walked into the brightly lit Kayne Corcoran Griffin (KCG) Gallery on a warm winter day in Los Angeles eagerly anticipating the sights that friends and colleagues had already described to me: Paul Robeson awash in bright colors: cobalt blue and highlighter yellow. By this point I was not surprised to see him make yet another appearance. He’s a globetrotter, even now, more than forty years after his death. His return is documented in film and music but it too has been auspicious in the art world.1 The question is not whether he will appear; I’ve learned that the answer is always a resounding “yes.” The question is, more precisely, where and what form will he take?

The sunshine that may otherwise assist in noting the detail of my surroundings hindered the sightlines for Hank Willis Thomas’s exhibition “An All Colored Cast” (January 18-March 7, 2020).2 Bold colors across flat planes—reds, lime green, and magenta—combine in striking geometrical patterns of squares, stripes, and hard angles. One piece mirrors a color test card; another, based on the work of Ellsworth Kelly, suggests a censor bar with its red diagonal strip stretching upwards from bottom left to top right. Both animate the exhibition’s relationship to the restrictions imposed on and by the moving images of film and television even as they refuse upon first glance to reveal the subjects being tested or censored. The occlusion in each piece is not due to the saturated colors alone. It is, in fact, the unique alchemies of the materials used that forces viewers to adjust the terms of their witness. Each piece is a UV print on retroflective vinyl, making it difficult to see the people under the vibrant surfaces.

Viewers must contend with various levels of surface in their attempts to know the Black and other people of color in the scenes. The ensemble of An All Colored Cast in particular presents a study in the entertainment industry’s dual maneuvers of racial absence and repetition as stereotype. Positioned in the KCG Gallery to the west and opposite a wall of glass, it features headshots of thirty-six actors and musicians of color who achieved notoriety during—and in spite of—segregation and various scares (Red and otherwise). Harry Belafonte, Desi Arnez, Anna May Wong, and the rest of the Cast have struck their best pose for an entirely new audience who now must contend with them as a collective, rather than individuals for hire. Each surface—face, lens, vinyl—interacts in excess of acting or entertainment and develops more than professional affect. In a world of racial caricature and violence, being Black, especially in the public eye, demands a masquerade relay, shedding and replacing masks of varying depths and contour. Thomas forces witnesses to adjust their sightlines through the interplay of context and detail, political life and play. His thirty-six stars in portraiture are a form of representation beyond the everyday trials of life but before the assignment of fantasy as professional actor. Each exists singularly like so many headshots of a casting call, although for a production yet to be determined.

Thomas references Andy Warhol’s Ethel Scull 36 Times (1963), aligning his square portraits four high and nine across and forming, from a distance, a deceptively simple rainbow checkerboard. Unlike Warhol, however, the subjects of An All Colored Cast aren’t recognizable until the retroflective vinyl is activated by the viewer. This surface is one more frontier in a prolonged conversation over the racialized body and modernist aesthetics.3

Thomas’s exhibition presents vinyl as type of skin, the reflection of which remixes vision by reversing the light. Instead of being drawn to and illuminating the darker hued subjects, it is propelled back at the viewer who must now make legible the images in front of them. The retroflective vinyl produces “shine,” which is theorized by Krista Thompson as the interaction or collision of surface and light that “induces a sublime state of visibility in which the subject is so hypervisible that it disappears from view.”4 This is the predicament of An All Colored Cast, in which the prominent subjects as well as their display are, upon first glance, little more than blank canvases for our projections. In their whispers of “we were here,” each subject requests additional curiosity and a lingering witness.5 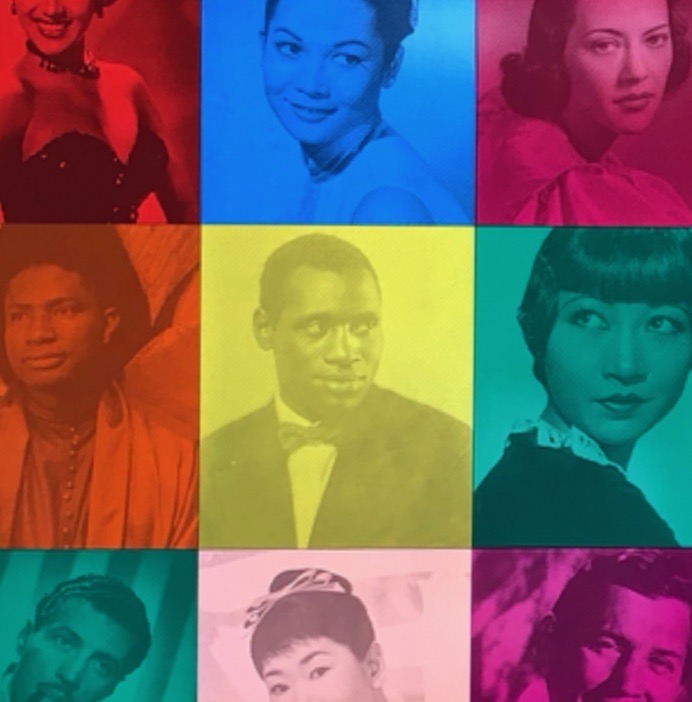 Three rows down and three columns to the right is Paul Robeson bathed in yellow light. He appears en pose in this photograph from the Harlem Renaissance era. During this time, he was revolutionizing the art world through recitals of Negro spirituals; he was upsetting black film representation by playing dueling brothers in Oscar Micheaux’s, Body and Soul (1925); and he was courting all of western Europe as a singer and star of stage and screen. Yet he brings far more to Thomas’s Colored cohort than individual acclaim. He is responsible for having shaped the political consciousness of at least three other members of the Cast (Belafonte, Ossie Davis, and Sidney Poitier), making him a nucleus within the Colored orbit produced by his fellow artists, which additionally includes co-stars Ethel Waters, Fredi Washington, and Hattie McDaniel as well as friend Lena Horne.

If Robeson serves as a bonding element for the exhibit through his multiple appearances and dense connections with other actors, he also presents a challenge. His enforced obscurity is an oft-recited element of his story that casts him differently, even with proper illumination. The reflective vinyl presents an especially appropriate medium through which to attempt knowledge of this remarkable and underserved man. Methodically erased from official documents and histories, Robeson is a defining subject and reading practice within “An All Colored Cast” and particularly An All Colored Cast, which insists upon the mining of multiple surfaces and skins in search of emphatic originals.

Shana L. Redmond (she/her) is the author of Anthem: Social Movements and the Sound of Solidarity in the African Diaspora (NYU Press, 2014) and Everything Man: The Form and Function of Paul Robeson (Duke UP, 2020). A public-facing scholar, her recent publications include critical profiles for National Public Radio and Women Who Rock (2018), as well as the liner notes for the “Us” soundtrack (2019). She is Professor of Musicology at UCLA.