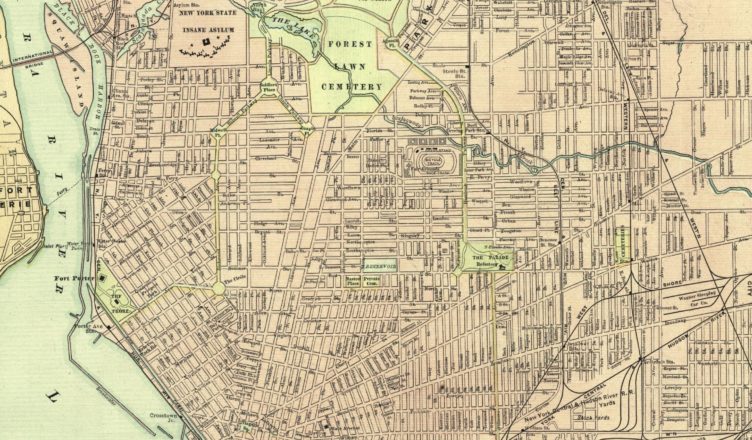 Poetics and Precarity, edited by Myung Mi Kim and Cristanne Miller, works variously. The collection is part institutional festschrift, part archival documentation, part response to a conceptual call to think about breath and precarity, and part contribution to an ongoing intervention in the field of contemporary poetry and poetics. According to its editors, the book is the first in a series of volumes that “will center around one or two lectures from the University at Buffalo SUNY (UB) series of Robert Creeley Lectures on Poetry and Poetics” (xi). In this first volume, accordingly, an originating address by Nathaniel Mackey, “Breath and Precarity,” sets out a series of questions that are taken up by the volume’s other contributors. These questions include the relationship between poetry, process, the body, breath, and precarity; the nature of precarity across political, geographical, ecological, social, and artistic spheres; the role of the Buffalo Poetics Program and Robert Creeley’s work in the lives of contributors and the history and present of poetics; and the intersections and constellations of these various institutions and concepts, artistic and social forms.

Anchoring much of the book, Mackey’s address returns us to a central tenet of the poetics originated by Creeley and influential at the Poetics Program—the centrality of breath to poetic production—and ties breath to precarity via racial difference. Mackey begins by describing the emphasis placed on breath in U.S. poetries of the 1950s and 1960s, most memorably in Charles Olson’s 1950 definition of “projective verse”: “the HEART, by way of the BREATH, to the LINE,” Olson wrote. Mackey links this preoccupation with breath in the work of poets such as Olson, Creeley, and Allen Ginsberg—abstract as it sometimes was—to a specific historical concern, to post-war trauma and “Cold War jitters” (6). “When breath becomes an object of attention […] no longer taken for granted,” Mackey writes, “anxiety is also in the air” (5). But the thrust of Mackey’s essay lies beyond this largely white midcentury set of poets, in the notion of a “radical pneumaticism” (9) found in black music and poetry, through which the connection between anxiety or precarity and poetics is made apparent. Mackey’s listening to musicians such as Sonny Rollins and Ben Webster, among others, leads him to ask: “Is it the precariousness of breath, its being provisional, without guarantee, or the blessing and bounty of breath [heard in the work of Sonny Rollins]? Could it be both, a reveling in—while recognizing, lamenting, even protesting—the transient boon that breath is?” (9)

Evoking Frantz Fanon’s formulation of breath in Black Skin, White Masks (“We revolt simply because, for many reasons, we can no longer breathe”) beside Eric Garner’s “I can’t breathe,” and working in part through his own poetry, Mackey recalls the fundamental and uneven precarity of the breath that lies at the heart of poetry. “That none of us is guaranteed our next breath is a truth that has to sit alongside another, equally obvious,” Mackey writes, “which is that precarity has been and continues to be unequally distributed, some groups serving, for others, as a sacrifice to it or a shield against it” (17).

Mackey’s address is followed by two of the collection’s strongest pieces, both of which respond to Mackey directly by building upon his thinking and expanding it into areas of gender and ecology. In her essay “The Ga(s)p,” M. NourbeSe Philip foregrounds that “this most fundamental of acts,” breathing, “is always a contingent one—breathing for, with, instead of, and into” (31). Philip reminds us that before any of us breathed, we were breathed for in a mother’s womb, and reframes breathing (for) as an act of radical hospitality at the heart of unevenly distributed precarity, contemporary and historical. For Philip, “it becomes imperative to lodge the poetics of breath identified by Mackey in the Black female imaginary” (36). In “Precarity Shared: Breathing as Tactic in Air’s Uneven Commons,” Jennifer Scappettone takes up another side of breath’s contingency, “grappling with sites of political interaction as real rather than virtual spaces, and with the medium of vocality as a substantial one—that of air” (46).  By attending to air as a physical medium—not all air is “good” air—Scappettone “situate[s] the poetic notion of inspiration within an expanded sensorium where breath is acknowledged not only as its literal foundation” but also the site of pervasive inequality across material (ecological, racial) levels, breath as “agent subject to contemporary realities of contamination and chokehold” (48).

Several other essays in the book move away from Mackey’s claims but continue to develop ideas about the relationship between poetics and contemporary precarity. Joan Retallack (“Constructive Alterities & the Agonistic Feminine”) asserts the value of the “agonistic feminine” as poetic model: “an active principle of ethical responsibility, biocultural agency with real-world responsibilities: to counter misogyny, racism, xenophobia of every sort, the pillaging of the planet” (103). In their essay “Precarity, Poetry, and the Practice of Countermapping,” Adalaide Morris and Stephen Voyce turn from the aural to the visual, exploring contemporary poetry’s capacity to create information-giving image-structures (or “counter-maps”) that “address forms of precarity at work in the twenty-first-century’s globally constructed information and surveillance culture” (118). Finally, Sarah Dowling’s “Supine, Prone, Precarious” is a compelling distillation of a possible relationship between poetic form and precarious form. Through poet Bhanu Kapil’s book Ban en Banlieue, Dowling tracks a shift from the poetic subject (“I”) to the lying-down body as a “materialist reconception of suffering” (148), a desperate poetic response to accumulated and perhaps irreparable bodily harm. 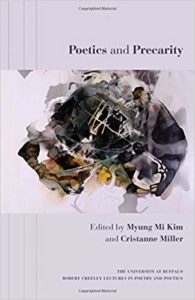 Still other essays (Elizabeth Willis, Vincent Broqua) provide personal or scholarly reflection on the textures and afterlives of the Buffalo Poetics Program. This variety of approach and tone across essays is surely part of the book’s stated aim to “[foreground] nonreductive, nonessentializing modes of conceptualizing difference and alterity” and to operate “on the boundaries of linguistic, ecological, formal, and political change” (xxi). And yet this dual track of concept (precarity) and institution (the Poetics Program) is, if not a problem, at least a provocation. A question that the book raises by design but fails explicitly to address is the role of the institution—institutions of higher education generally, the Buffalo Poetics Program in particular—in shaping conditions of contemporary or historical precarity. To find answers to this question, we might look to Juliana Spahr’s account of her own experience of the program, which begins her book Du Bois’s Telegram: Literary Resistance and State Containment (2018): “Many of us acted as if the modernist tradition excluded writing that had direct connections to thriving culturalist and anticolonial movements of the time,” she writes. “I […] did not see my writing as having to take a stand on the continuing legacies of colonization that are imperial globalization. I (wrongly) did not see myself as part of that legacy of colonialism that is imperial globalization.” 1 For Spahr, this “avoidance” of material anticolonial struggle in the Buffalo Poetics Program is naïve but not “innocent”; it runs parallel to the thinking and interests of U.S. national power.2

Indeed, these are some of the concerns raised in the book’s closing piece, Heriberto Yépez’s “The Opening of the (Transnational Battle) Field,” which speaks to the relationship between a certain experimental strain of U.S. poetics (including work by Olson and Kenneth Goldsmith) and the tradition of colonization and appropriation as it occurs in North American universities. “But some Souths,” Yépez concludes, “desire to unrest the transnational // And force the ‘experiment’ / To become a program of world revolution / Without world coloniality” (168). These final words are then followed by three appendices: “Poetry in the Making: A Bibliography of Publications by Graduate Students in the Poetics Program, 1991–2016,” plus full programs for the 2016 Creeley Lecture and Celebration of Poetry, and the “Poetics: (The Next) 25 Years” conference. In other words: in the asymmetries and conflicts between the collection’s own voices and concerns, there is a set of further questions to be addressed. Certainly the fact that few essays in Poetry and Precarity consider the program as institution vis-à-vis the precarity they address does not diminish the importance of each of them to the field of contemporary poetics. There remains, however, a necessary conversation to be had around the book’s premise. It is possible to celebrate this program or any other for the work it produces and influences and for the modes of thinking and conceptualizing it engenders, and simultaneously to turn a critical eye toward its complicity in producing or perpetuating global precarity, even at a distance.

Lindsay Turner's first collection of poems, Songs & Ballads, was published in 2018 by Prelude Books. Also a translator of contemporary Francophone philosophy and poetry, she holds a PhD in English from the University of Virginia. Currently she lives in Greenville, South Carolina, where she is a Visiting Assistant Professor of English and Creative Writing at Furman University.