“It is so black that it is blue,” is a racist expression that is widely known and still, unfortunately, sometimes echoed in Brazilian daily life. This provocation is contained in the title of Ana Pi’s NoirBLUE:  Displacements of a Dance (2018). The film is based on the dancer-director’s travel diary written while in Africa that was transformed into a solo dance and later into the short film. Born from the desire to share impressions of her experiences on the African continent, the film was a highlight of several national and international festivals. Its singular poetic form creates and revises a dialogue between Africa and the diaspora, starting with the question of how to create “a dance that is so black it is blue.”1

The success of Pi’s endeavor resides in the fact that the director does not recognize the legitimacy of the antiblack world that created the demeaning expression.  The inquiry acts as an ironic provocation. NoirBLUE recognizes that the Western world will never read Black experiences as anything other than trauma. Thus, what we see on the screen already points to the recognition that a blue noir dance, a transmutation dance, is only possible in another type of world. This world emerges with the announcement of the “end of the world as we know it,” what Denise Ferreira da Silva stated as the affirmation of a black feminist poetics, a Black existence in this post-world.2 For Ferreira, in the collapse of the Western model of knowledge with its categories of space and time, Black women in their bodies and poetics are the locus of futurity. Black women are the film’s location. 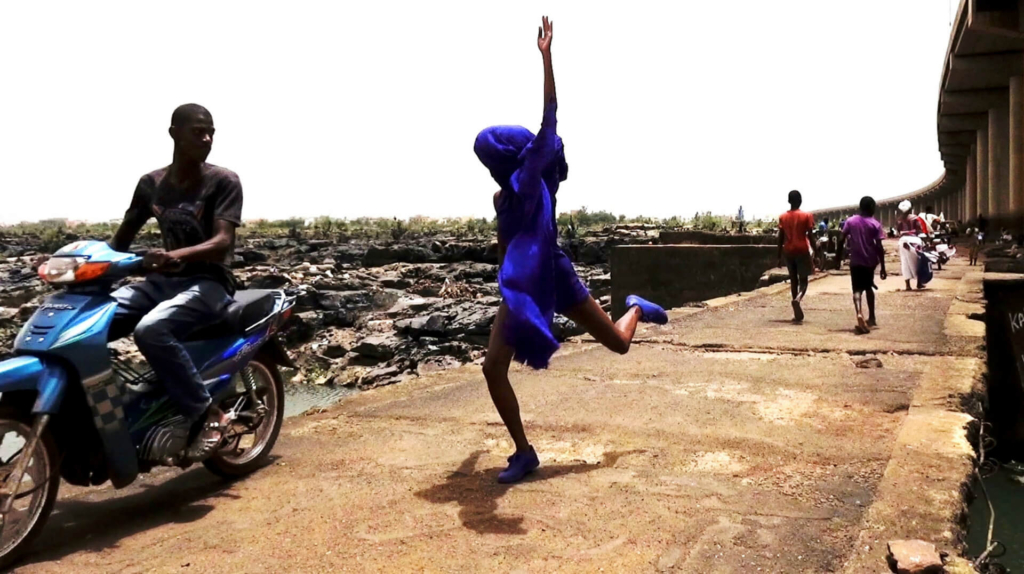 In NoirBLUE, present, past, and future coexist and are amended by the dancer wherever she goes. Be it at the desert, over and below a bridge in the Niger river in Bamako, on a red soil road, at a place that looks like an abandoned tannery, at an outdoor amphitheate, or at a sandy soccer field, the dancer amends. The origin of the film’s spiral temporality goes back to African traditions.3 Breaking with the common sense notion that every trip has a middle and an end, NoirBLUE is a looping travel diary whose central gesture is to be, not to arrive or depart. Being is its “biggest commitment,” as Ana Pi says. The initial impression that the film is simply about a Black diasporic person reencountering their ancestry on the African continent quickly dissolves as the film progresses.

The body in the film moves through the different environments in its journey through different African countries: Niger, Burkina Faso, Mali, Nigeria, Equatorial Guinea, Ethiopia, Ivory Coast and Mauritania. In Ana Pi’s black body, the territories are consolidated because it is in and through her body, a “body-territory,” that the recognition and knowledge of people, places, and cultures occurs.4 In transit through different spaces, Pi dances, but with the music hardly heard. During most of the film, the only sound present is her voice narrating her thoughts. “Some things I see, others you have to imagine.” In the rhythmic pace of her voice, interspersed with pauses sometimes as long as taking a breath before a deep dive, one film unfolds on the screen and another one in the imagination of the viewer. They operate in complementarity, gradually unveiling the invisible.

In almost every dance scene, Ana Pi has a blue veil that dances with her and with the wind. Sometimes touching the ground and sometimes tied and untied with her thoughts and feelings. The veil contains layers of temporality in its blue color; it is more of a character than a simple element of performance. This type of veil is sold in West Africa by the Tuaregs, a nomadic people who inhabit part of the Sahel, a strip of desert below the Sahara. The Tuaregs use it in their everyday desert life to protect themselves from wind and sand. NoirBLUE enhances the blue of the veil as nomadic, unstable, and flowing like its people of origin. Yet, it also functions in terms of grounding and roots: “This veil reveals to me that which is most hidden in the story they told me.” The blue extracted from indigo, a plant used to dye fabric throughout West Africa, was one of the revenue sources for plantations in the Atlantic world at the time of slavery. (It is an indigo found on Nana’s darkened hands and dress, and the Unborn Child’s hair bow in the past and future simultaneity of Julie Dash’s Daughters of the Dust (1991).) An ancestral as well as current indigo blue, it dances and travels in Ana Pi’s displacements, reconnecting geographies and temporalities.

With silences, blurs, slow-motion and reverse dances, overlays of images, transitions in black and blue screens, Ana Pi performs what Tina Campt calls a “practice of refusal.”5 It is the refusal of the system’s repeated violence in seemingly subtle or not so subtle ways.6 The film’s initial claim – “It is important to know that what I am experiencing now is the future that someone dreamed for me a long time ago” – returns in the end with the same colored and diffuse lights while moving smoothly to the sound of Pi’s always serene voiceover. “Now I am also dreaming of those who will come after me.” By merging the temporality of Black experiences into a dancing gift, NoirBLUE traces a story of the (re)encounter of the diaspora with the African continent. A story no longer based on trauma, but rather on the announcement of a futurity that pulsates like the rhythm of the heart. A story with the conviction of freedom in a world where no shade of black turns out to be blue.7

Janaína Oliveira has a Ph.D. in History and is a professor at the Federal Institute of Rio de Janeiro (IFRJ) and Fulbright scholar at the Center for African Studies at Howard University. She is the head programmer of the Zózimo Bulbul Black Cinema Film Festival in Rio de Janeiro, part of the programming committee of the FINCAR, International Women Filmmakers Festival in Recife, and the advisor for African and Black diaspora films for the Locarno Film Festival. She is a member of the Association of Black Audiovisual Professionals (APAN) and the founder and coordinator of the Black Cinema Itinerant Forum (FICINE). Oliveira is the programmer of the 66th Flaherty Film Seminar scheduled for June 2021.