Narcissister Breast Work (Narcissister, 2020). Copyright and courtesy of the artist.

Did you read this opening passage on the front page of today’s New York Times (“They are parallel plagues ravaging America: The coronavirus. And police killings of black men and women”)?1 The combination of COVID-19 and global protests has turned many of us into masked activists. As a mask and merkin-clad persona named Narcissister, you have been putting your black body on the line in the name of racial and sexual justice for years. Whether in live performances such as Everywoman (2009) or videos such as Self-Gratifier (2008), Narcissister often lingers in the isolation of solo work. However, through the collectivity of the Narcissister is You project, people of differing sizes, abilities, genders, and races donned your mannequin-like masks and performed with you onstage or documented their everyday lives. I just watched your short film, Narcissister Breast Work, which premiered at Sundance in 2020 and focuses on the rights of women to bare their breasts in public. You invited people with various racial and gender presentations to traipse the streets of New York City topless in feminine masks of different complexions. We hear offscreen, “You’ll put the mask on first,” but never see anyone unmasked. Each Narcissister removes their shirt. At one point in the film, an NYPD cop walks alongside a Narcissister, implying that protection can easily become threat, and that exposing bare skin is fraught with risk.

Breast Work is informed by the politics of movement through public space and onscreen space. Text from your 2014 Breast Work manifesto scrolls across the screen from one side to the other. Included in it are statements such as, “In 1992, Penal Law 245.01 was amended, granting the women of New York the protected legal right to bare their breasts in public spaces.” This amendment accommodates breastfeeding, as well as “entertaining or performing.”2 But “exposure” of “private or intimate parts” remains otherwise illegal.3 What work do breasts do when detached from the reproductive regime? Can we think of breasts apart from sex? The manifesto continues, “This is not a universal freedom. Many cities in the US circumvent more liberal state laws to continue to persecute women for baring their breasts in public….Inherent in any law preventing a woman to bare her breasts in public is the underlying message that women’s bodies are fundamentally shameful.”4 While we are now hyper-aware of choreographies of contagion (social distancing) and organizing bodies to protest racialized violence, your film also alludes to the ever-present threat of gendered violence, and an onus placed on women and transgender people to conceal themselves.

Throughout the film, we groove to a pulsing, electronic soundtrack, composed of the kind of thumping that keeps you awake at an after-hours club just before sunrise. Charged, no resolution. Like such unrelenting beats, Narcissister is always “on,” suggesting the ongoing threat to feminine bodies and nonwhite bodies also requires being “on…guard.” While your film doesn’t include formal choreography, it is structured around pedestrian acts of walking, standing, biking, and sitting. As Narcissisters cross intersections and traverse gentrifying neighborhoods, we detect liminality, transing…corporeal passages through incongruity and friction.5 Their bodies and heads don’t match up; they and their surrounds are at odds.

You and I have discussed how the mask denies us access to your eyes, colloquially referred to as “windows to the soul.” As Brenda Dixon Gottschild elaborates, “soul” is a crucial element of Africanist dance—that which connects the rootedness of the earth to the spirituality of the heavens.6 Your dance training at Alvin Ailey involved the embodiment and facial expression of Gottschild’s “soul.” We mixed kids trained together at Ailey in the 1990s, but you left the school, declaring a preference for dancing with your eyes closed, thus the mask. Distinct from, yet influenced by, the restrained affect of Adrian Piper and William Pope L., how does Narcissister’s cool façade and soulful embodiment complicate expectations of “animatedness” in black performance?7 She enjoys a citational relationship to dance, as she does to pornography, collage, crafting, noise art, and scavenging. She dances but is not a “dancer.” She is pornographic, but not a “porn star.” She makes music but is not a “musician.” She is something closer to “performance artist” or “activist,” which says more about markets, discourses, and limits of inclusion than it does about your work. Shifting out of the relative safety of the studio and into the unpredictability of public space, where your eyes must open even under the mask, where do your defenses lie—in speech, in body, in knowledge…or in the risks of public performance itself?

Narcissister Breast Work ends at an East Village storefront at night: two cis men emerge from a subterranean café, giggling and fiddling with phones that illuminate their maskless faces…an upstairs storefront showcases a crooked American flag (a recruitment center?)…a Black, gender nonconforming person walks by in a white sweatshirt that says in a 1970s font, “Free Spirit.” Two large, shiny black garbage bags sit on the sidewalk’s edge and an intensified club beat pulses while a lone Narcissister stands at the bottom of a stoop, ready. Will she be met with the threat of antiblackness and gendered violence, or with the freedom of anonymity?

As someone who has walked down the street as a Narcissister, I thank you for bringing me and others into disobediently activist experiences of embodied dissonance. Under the mask, we sense the troubling proximity of individual freedom and the threat of fetishization and violence. What is your next action, and for whom will you perform? 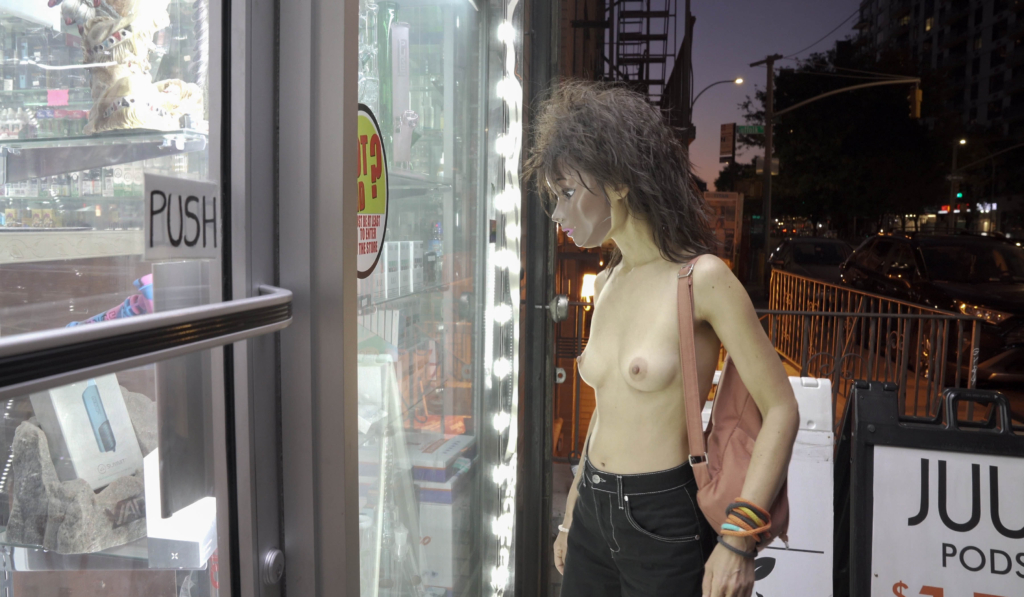 Ariel Osterweis is on faculty at CalArts, where she teaches courses in performance studies and critical dance studies. Her book manuscript, Body Impossible: Desmond Richardson and the Politics of Virtuosity (Oxford), examines issues of race, class, gender, and sexuality in contemporary dance. Osterweis is developing another monograph, Prophylactic Aesthetics: Latex, Spandex, and Sexual Anxieties Performed, and a book of interviews called Disavowing Virtuosity, Performing Aspiration: Dance and Performance Interviews (Routledge). She danced with Complexions Contemporary Ballet, Mia Michaels, and Heidi Latsky, has choreographed works, served as dramaturg for John Jasperse and Narcissister, and most recently performed with Julie Tolentino.