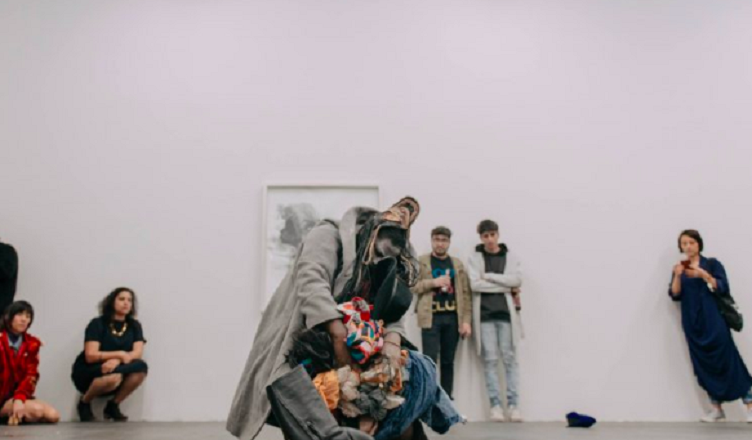 Kenyatta A.C. Hinkle’s work as an interdisciplinary visual artist, writer, and performer is a sustained practice in conjuring Black women’s past and present lives into intimate spaces. As she explains in her artist statement, “I make work that allows the dead to talk.”1 Her most recent ongoing project, The Evanesced, consists of over 100 drawings and large-scale paintings of missing Black women in the United States and the African diaspora; it also comprises a series of performances. The women figured in her paintings and drawings are surrounded by brushstrokes and lines that seem to slide them onto the canvas, like ghosts that happened to materialize within her paintings. This sense of opening the present to make a recuperative space for the past is integral to Hinkle’s practice of the “Historical Present,” a phrase that serves as a mantra within her work. Hinkle describes the Historical Present as “the residue of history and how it affects our contemporary world perspective.”2 This sense of the Historical Present invokes ideas central to what the literary theorist Christina Sharpe has described as “wake work.” In her 2016 volume In the Wake, Sharpe writes, “In the wake, the past that is not past reappears, always, to rupture the present.”3 By beginning from these points of rupture of Black life, Hinkle articulates her own expression of the #SayHerName movement, which demands that Black women who have lost their lives to anti-Black violence be remembered. Part of an ongoing series at Human Resources Los Angeles, The Evanesced: Embodied Disappearance centers the death and ever-present afterlife of Black women to hold space for pain, remembrance, and healing.

The air is still and quiet when Kenyatta Hinkle walks into the large concrete performance space at Human Resources Los Angeles with a surprise guest, her son. Both don heaps of clothing; a multilayered head covering obscures Hinkle’s face, while a ghostly powder covers that of her son. Together, they walk—Hinkle in pumps that appear to be at least five inches tall and her son on his tiptoes—to the middle of the room, where Hinkle places two small African statues, sage, and a small black object wrapped around what looks like an abalone shell. After creating this ceremonial central space, both Hinkle and her son dance around the objects to rhythmic music with open vowel sounds and a steady melody. Hinkle kicks away her heels and both performers remove layer after layer of clothing until, at the end of the first song, each figure wears but one. Ranging in material, color, print, and style, these layers fall to the floor like blown-up flower petals.

The second song—a chain gang song in which the voices repeatedly sing the word “memory”—commences and Hinkle and her son pick up pieces of cloth and begin whipping them into the air and onto the concrete floor; the cracking sounds reverberate through the room. This continues for the duration of the song. At the end, Hinkle gathers all of the clothing and other loose items strewn across the floor in a pile next to her central space and, accompanied by the opening strains of a blues song, procures some chalk. She then draws a spiral on the floor, beginning right outside her central space and next to her layers of clothing, and blooming outwards toward the spectators. Around this point in the performance, the last song, a jazz piece, begins to play. After painstakingly completing her circle, Hinkle retraces her steps to the center and tucks all of the previously discarded clothing into her dress. At this point, her son yells into crowd, “Thank you for coming everyone, it’s over now! Please clap!” Some laughter erupts from around the room and applause follows. Using both hands to hold her clothing belly in place under her dress, Hinkle collects herself back into her heels and walks backwards along her chalk lines and out of the room, her son in tow. After walking up the stairs and into the room overlooking the performance venue, Hinkle’s son once again pokes his head into the empty space above us and shouts, “Thank you!”

From its first moment, The Evanesced: Embodied Disappearance is a practice in establishing, negotiating, and honoring a plural self. Amber Musser describes the plural self as a “selfhood that coalesces—even as it gnaws at the edges—in this state of openness and instability” as well as “a self created in and through relationality.”4 Within the context of Hinkle’s work, the plural self encompasses the artist’s positionality as well as the pasts, presents, and futures of the Black women she honors through her work. Hinkle establishes this plural self immediately through the clothing she brings into the performance space. Widely varied in color, print, and style, the layers of clothing materialize the Black women Hinkle seeks to commemorate. Figuratively embodying their memories, Hinkle brings the Black women that make up this plural self into the performance space and moves through a process of acknowledgement, mourning, and healing.

Returning to Sharpe’s notion of wake work as a mode of “inhabiting and rupturing” the afterlives of slavery with “known lived and un/imaginable lives,”5 we might say that Hinkle’s handling of the clothing is a particularly salient example of this manifold process. By wearing, discarding, and ultimately carrying the clothing, the artist asserts that the Black women she honors in her piece and throughout her work are always evoked in the present and will continue to be evoked in the future. While the clothing is a constant presence in the space, its appearance is always in flux. Hinkle enters with the clothing—and, by extension, the Black women to whom she pays homage—visibly adorning her body. By contrast, she exits the space with the clothing tucked under her dress, imitating a pregnant woman—and thereby implying the plural self’s futurity. Through her handling of this physical reminder of past and future alike, Hinkle at once inhabits and ruptures the histories of the Black women she honors within Black life.

The presence of Hinkle’s son further underscored the cyclical nature of the Historical Present in Black life and added another layer to the artist’s resonant wake work, even if his participation in the performance at Human Resources Los Angeles was—surprisingly—unplanned. Throughout The Evanesced: Embodied Disappearance, he exhibited an intuitive sense of what to do. When Hinkle walked in her heels, he gingerly stepped around on his tiptoes; when Hinkle drew spirals around the center of the space, he took another piece of chalk and drew on the wall. At one point, he bent to pick up a statue that had fallen while they whipped their clothes into the air and onto the floor. This intrinsic understanding of how to occupy the space was a reminder that children of color, and Black children in particular, are not protected from the realities of living in racialized bodies. As Christina Sharpe writes, “to be in the wake is to occupy and to be occupied by the continuous and changing present of slavery’s as yet unresolved unfolding.”6 In his understanding of how to occupy the performance space, Hinkle’s son demonstrates that he is not exempt from this condition. Instead of watching from the sidelines, Hinkle’s son was insistent upon joining his mother in her embodiment of otherwise forgotten Black women. Though improvised, his presence felt innate to The Evanesced: Embodied Disappearance.

From Hinkle’s layered clothing and use of sage to her son’s laughter, The Evanesced: Embodied Disappearance works towards an articulation of all that encompasses the Historical Present of Black women’s lives. Combining homage and remembrance, pain and trauma, the cleansing of space and the healing of a plural self, and accompanied by a soundtrack that gestures towards the historical arc of Black music, Hinkle cycles imaginatively through stages of Black life. In The Evanesced: Embodied Disappearance, Kenyatta Hinkle shows us what it means to enter a space born out of the Historical Present: it is a space that is expansive enough to hold eulogy, pain, anxiety, joy, and healing.

Misha Choudhry is a PhD student in the Department of English at the University of California, Riverside. Her research examines the relationship between Muslim women, race, and affect in the United States. She is particularly interested in poetics and visual culture.