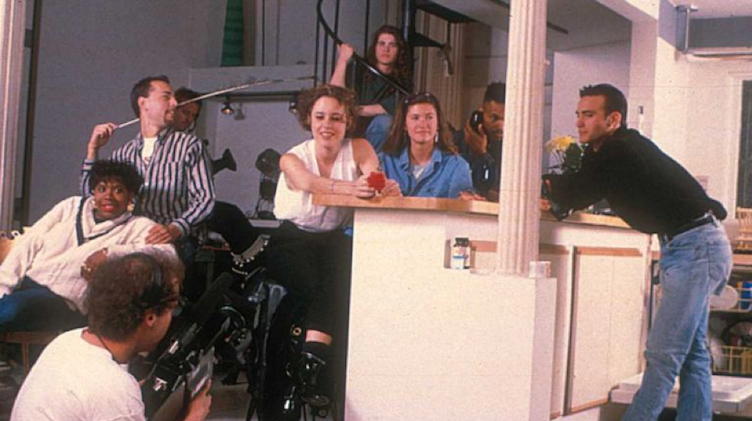 The Real World, Season 1, via mtv.com.

Christopher Grobe, The Art of Confession: The Performance of Self from Robert Lowell to Reality TV. New York: NYU Press, 2017.

Public life is saturated by confession. We find it in social media posts, in ubiquitous and ungenerous over-sharing, in the demand for public figures to confess to (and apologize for) any number of ignominious acts, in our insatiable appetite for the intimate details of celebrity life. In The Art of Confession: The Performance of Self from Robert Lowell to Reality TV, Christopher Grobe offers an explanation of how we got here.

Grobe argues that in or around 1959, confessionalism offered “a new way of saying I (and meaning it) in postwar America” (1).  While for many scholarly readers the idea of “confessionalism” is associated with a set of American poets such as Robert Lowell, Anne Sexton, and Sylvia Plath, Grobe makes a compelling argument for confessionalism’s broader relevance beyond this midcentury group. Grobe’s main claim is that confession is more than just over-sharing, that it is an art of self-formation that is both performative and performed. Confession takes place in the space between the page and the stage in a tense vacillation between script and improvisation, or, in the well-known words of Robert Lowell, between “a cooked and a raw” form (53). Grobe theorizes confession as an infinite play between constraint and release, an “endless rehearsal for a breakthrough” (27). Confession performs the self in a constitutive state of unfinishedness; there is always something more to say.

While the performances that Grobe studies almost always take place in front of an audience, Grobe’s understanding of performance is not limited to the theatrical. Grobe defines performance, in the wake of theorists such as Peggy Phelan, Diana Taylor, and José Esteban Muñoz, as a kind of identity-work that can take place anywhere, anytime, and through all manner of acts from the mundane to the spectacular. One of the most persuasive arguments in the book concerns exactly this issue of the many forms of confession, which is never as simple as it may appear.  On the surface, the prospect of a single individual letting loose the details of their life in a minimalist setting (perhaps best exemplified by reality TV’s confession booth) appears to be a direct and unmediated form of narration. However, Grobe counters that, in fact, confession as a performance of the self is “hypermediate,” depending upon a play across media (117).

Accordingly, one of the most interesting aspects of The Art of Confession is its choice of objects. Across a series of case studies, Grobe traces the cultural history of confession through poetry, stand-up comedy, feminist performance art, monologue storytelling, and reality TV. Within each of these art forms, Grobe explores a complex interplay of media obscured by confession’s seeming immediacy. In Chapter One, Grobe offers an insightful analysis of the increased demand for poetry readings at midcentury, as well as the once prominent role of poetry recordings on LP. In his readings of familiar confessionalists such as Lowell, Sexton, and Plath, Grobe traces the history of confession back to a unique moment in the late 1950s when poetry began to shake loose the rigidity of autonomous art and embrace the messy rawness of the live reading. Here Grobe also finds an unlikely connection between poetry and stand-up comedy, specifically in the work of Lenny Bruce and Richard Pryor, who likewise performed personal narratives as a vacillation between routine and improvisation.

In Chapter Two, Grobe offers feminist Consciousness Raising as an influential form of confession which shifted the public’s conceptions of gendered identity through acts of ritual self-narration. Grobe critiques efforts by prominent feminist artists and organizations to control this new narrative form in an attempt to secure ideological uniformity (white, normatively gendered, heterosexual, middle-class) in cisgender women. Grobe looks to feminist performance art, especially the work of Linda Montano and Eleanor Antin, as a genre which engaged the confessional aspects of Consciousness Raising as a means of exploring identity formation without mass-producing the results. In the hands of artists like Antin, confession as identity-formation is queerly performative and in flux.

Chapter Three turns to monologist Spaulding Gray, whose signature, deceptively simple style was to deliver personal narratives while sitting behind a desk, notebook, and microphone. This chapter digs into the tension between writing and performance, “between the scriptive  book and the playful body,” undermining the transparency suggested by confession’s minimalist aesthetic (175). In a final chapter on reality television, Grobe argues for the mainstreaming of the art of confession. The inaugural season of MTV’s The Real World serves as his case study. Reality TV’s presentation of “people playing themselves” offers an iconic example of confession’s constitutive paradox. As Grobe explains, in reality TV, we find “both theatrical posturing and effortless being, styled rhetoric and artless talk,” a culminating example of confession’s oscillation between fabrication and sincerity, the performative and the performed self (196).

In the book’s coda, Grobe offers a deeply moving account of the 2015 Amherst College sit-in, in which students protested the College’s failure to support and protect students and faculty of color. At the sit-in, Amherst students shared stories of their own experiences of racism on campus. Grobe argues that these narrative performances stand not only as evidence of confession’s full integration into performances of the self, but also its political stakes. 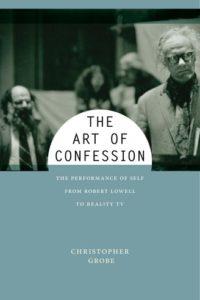 But is sharing the harm that has been done to you the same thing as “confession”? There are other names for what these students performed: witnessing, giving testimony, being heard. And what is the relationship between confession and guilt, wrongdoing, and shame?. Certainly struggle, violence, and oppression can be experienced as shameful. But, in the end, can you confess to being harmed? Grobe addresses the “embarrassment” of witnessing confession in Chapter One, the “guilty pleasure” of watching reality TV, but, while shame is included in the index, a nuanced engagement with negative affect is lacking in the book (63, 187).

Understanding confession’s relationship to shame or wrongdoing seems especially important considering that Grobe’s examples often revolve around the revelation of a social wound: the bland traumas of white patriarchal suburbia in Sexton or Plath, the violent constraints of gender normativity in Antin and Gray, the “Mental Terrorism” of white supremacy explored in the poetry of reality TV star Kevin Powell (219). If confession is theorized as a kind of breakthrough, the minimal attention to the type of boundary being broken—and who is breaking through it—is a shortcoming of The Art of Confession.

To his credit, Grobe is attentive to the “Unbearable Whiteness” of the book’s archive, addressing it in one of the four short “Interlude” chapters which bridge each main chapter (37). The Art of Confession focuses on what Grobe identifies as early instances of confession in each of the art forms under study in the book. He argues that these initial confessionalists tended to be white. “At every stage,” Grobe claims, “confessionalism selects for privilege: for the people who are motivated to write this way, who feel confident in doing so, and who are then received and celebrated for it by the public. This is not to say that there were no confessionalists of color—or, at least that there wouldn’t be soon. It’s just that they had a lot of trouble surmounting this genre’s many barriers to entry” (40).  Grobe offers a dual prong explanation for this claim. First, he claims that white people are more likely to expect the entitlements of privacy, thrillingly violated by confession, as well as the affirmation of their identities, tested through confession’s play. By contrast, these are hard-won battles for people of color. His second argument is that racism likely prevented would-be confessionalists of color from circulating their work. However, in reading The Art of Confession, several well-known artists of color whose work might have served this project came to mind, especially in the “Self-Consciousness Raising” chapter on feminist performance art. Adrian Piper’s pieces Mythic Being and Talking to Myself: The Ongoing Autobiography of an Art Object, which employ practices of drag performance and self-narration (as in Eleanor Antin’s work), feel especially relevant. Howardena Pindell’s video Free, White, and 21 engages the Consciousness Raising and drag performance found in Antin’s and Montano’s work and anticipates the confessional interview style of The Real World.

It is not that The Art of Confession ought to have referenced these works in particular. Rather, the arguments for confession’s broad relevance and theoretical portability would be more compelling if the book attended to race with the same critical acuteness that it brings to analyses of gender performativity, queerness, and feminist consciousness. This is not a question of representation so much as contextualization. The Amherst College sit-in engaged a history of self-narration that includes not only white feminist Consciousness Raising, but also anti-racist aesthetic and political traditions that challenge the a priori whiteness of performative and performed self-articulation. The book’s frame could be expanded to more pointedly address how race and racism inform the forms of saying “I” in America.

Despite its omissions, The Art of Confession is a notable contribution to performance studies, offering fresh perspectives on the relationship between performance, the formation of the self, and the art of talk.

Rachel Carroll is a Visiting Assistant Professor of English at Oberlin College. She is currently writing a book on race and experimentalism in 20th-century American literature and visual culture.