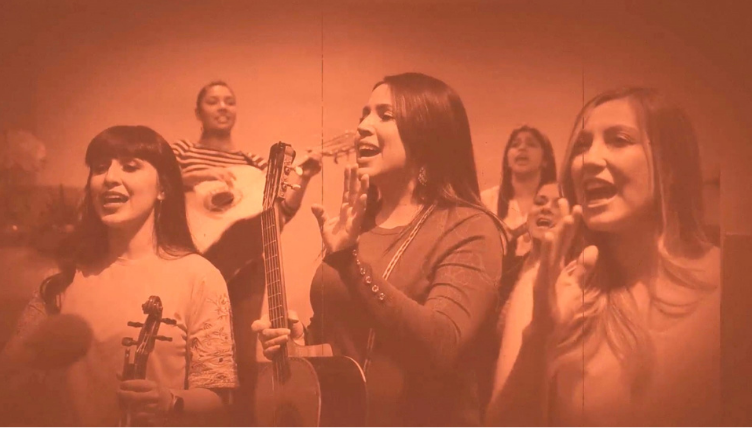 My name is Susie García and I have a deep passion for music and my Mexican-American heritage. Ten years ago, I decided to found an all-female mariachi group “Las Colibrí” or the “Hummingbirds.” The group returns to the all-string instrumentation of the early-twentieth-century mariachi tradition and the colorful, feminine costumes of the Mexican cinematic divas of the 1940’s and 50’s.

Today, this journey has brought me to Manuela García. While I have no relation to Manuela, our personal narratives are quite similar. We were both born in Los Angeles, were formally educated in our great city, and became teachers of Spanish and businesswomen. But most importantly, we both became culture bearers, protectors, and promoters of our heritage and traditional Mexican music. Our efforts span over 150 years and tell an important story about the influence of music and culture across borders, generations, and genders.

What is most interesting when looking at Manuela García’s story in the context and timeline of music across borders is that Manuela may have never considered the music she was making and sharing as anything but something that made her happy and proud. Typically, that is the true aim of musicians and artists: to create and share for the love of their craft. As women in the arts, this journey is not always easy, especially in male-dominated spaces. While Manuela and I lived generations apart, we have the shared struggle of fighting for our cultures, voices, and talents to be respected and heard.

Manuela was born in Los Angeles, while her father and mother emigrated from Mexico and some of her half-siblings were Mexican nationals. She may have experienced some identity issues with being American, or at least was conscious of the fact that she carried two sets of cultural identities. One thing that does not change no matter where she was born, was the simple fact that she was a secure, intelligent, talented, and assertive woman living in a time when gender roles were explicit and women’s rights were hardly recognized. There is proof of this struggle in the letter she writes to Charles Lummis in 1913.

Manuela was born almost twenty years before Mariachi music even became popularized in Mexico, so it makes sense that her influences were Spanish folk music or regional songs taught to her by her father Ignacio, a musician, and possibly her mother. The adaptation of the Spanish poem “Ruiseñor” that is found in her journal—which we hypothesize was the beginnings of the song “El Sauce y La Palma”—is truly a magical composition and arrangement.

Somehow the song made its way back over the border to Sinaloa and was revised (perhaps to sound more masculine), and began it’s popularity via performances by “Banda” groups in the region. Over time, Mariachi groups and popular ranchera singers began to perform the song regularly. In modern times, “El Sauce y La Palma” is played regularly in the United States and requested by many mariachi fans who may not even speak Spanish fluently. This phenomenon ensures that folk music can live on and on, taking on so many forms and crossing borders time and time again. In a live performance recorded at “La Fonda,”—which is a designated Los Angeles Historic-Cultural Monument as of 1983, and has been a home for Mariachi music since 1969—Las Colibrí conjured the spirit of Manuela García’s music.1

The more contemporary arrangement of “Versos del Alba” was adapted by Pepe Martinez Jr. (a former member of Mariachi Vargas for twenty-five years) adding a three-part harmony in the chorus to give it a feminine sound.

Who would ever think that the biggest gifts we can give the future are what we can preserve from the past? When we witness the accomplishments of those who look like us and share a similar lived experience in Los Angeles, we are inspired, our work is validated, and we are encouraged to share more of who we are. Manuela is a perfect example of this dynamic. She has inspired me and Las Colibrí throughout this project to pursue our musical journey and rethink our influence across borders and within our own city. At the very least, we are proud to be part of the “Versos y Besos” story, and we look forward to being discovered by others in generations to come at the Autry Museum.

Suzanne García is better known as "Susie" to all her fans, friends, and family. If you are not laughing, crying, smiling, or dancing when she is onstage, then she doesn't think she has done her job. With a keen ear for music, she began playing violin as a child. In 1991, Susie made her first appearance at the Hollywood Bowl for a "Tribute to Women in Mariachi.” She would return to the Hollywood bowl three more times as a member of Mariachi Las Adelitas (1997) as well as Mariachi Las Alondras (1998, 1999). In 1999, Susie helped pioneer one of the first modern all-female run and directed mariachi bands in Los Angeles by the name of Mariachi Divas. During her nine-year stint with the Divas, Susie performed at countless concerts and music festivals and received her first American Grammy award for “Best Regional Mexican Album” in 2008. She started Las Colibrí in 2009 and has since led the group to become one of the premiere female mariachi ensembles in Los Angeles. Susie is a musician at heart but is equally proud of her work in the field of educational publishing and pursuing her education goals with a B.A. in Spanish from UCLA and a Master's in Counseling from Chapman University. Susie García is a Los Angeles native with a passion for preserving and promoting culture and tradition. She is the President of Colibrí Entertainment Inc. where she wears many hats including musical director and composer, artistic director, manager, and executive producer. Since 2012 she has produced eight successful shows at the John Anson Ford Theatre, consulted on various other productions, and founded the first all-female youth academy in Los Angeles called "Las Jovencitas."